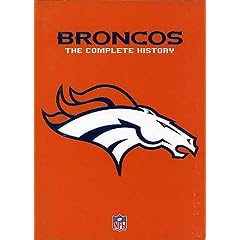 Election Day!  Have you voted yet?  Today is also notable for another reason, as NFL Films released Denver Broncos - The Complete History, a 2-Disc, 6 1/2 Hour look back at the history of the Broncos. The Rocky Mountain News has the following summary --

The first disc is a storybooklike retelling of the highlights (and lowlights) of Broncos history featuring commentary by former Broncos such as Little, Elway, Tom Jackson and Karl Mecklenburg.

Disc two takes viewers back to Cleveland and the infamous AFC Championship Game that featured "The Drive."

The set also includes special features with Elway, Mike Shanahan, John Lynch and Jake Plummer "in their own words."

The most compelling goes inside the huddle with Plummer, where he offers glimpses into his fragile psyche and somewhat forgetful mind.

Plummer talks openly about forgetting snap counts on the way to the line of scrimmage, which often ended in on-the-camera shouting matches with his offensive linemen.

Hopefully my copy will arrive today or tomorrow.  If you want your own copy, you can order one HERE.