You gotta love Al Davis.  Not only is he living on the successes of the past, a very distant past, but he loves to cause trouble with the mass media.  Earlier in the year he threatened to punch a San Francisco beat writer, something I am sure we would never see from Pat Bowlen, and now it's a beef with former Denver Post columnist, current NFL Network rover Adam Schefter. 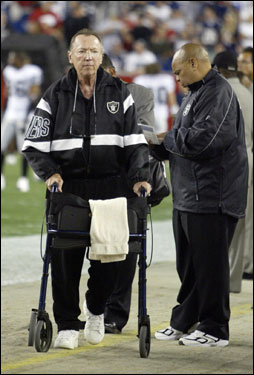 Maybe Al and his walker can return to the sidelines!

You see, Schefter reported earlier today that the Raiders are planning to fire Art Shell after the season.  According to Schefter, the Raiders are disappointed with how Shell has fared in his second stint with the Raiders.  A lack of inspiration, a total mess in regards to Randy Moss and Jerry Porter, and perhaps the biggest reason of all, the Raiders' solid 2-12 record.  Shell still has a year left on his deal, but Schefter was clear, Al Davis is going to fire Art Shell.

It didn't take the Raiders long to release the following statement --

"Adam Schefter has always been a false rumor monger with respect to the Raiders and Anti-Raider bias based upon his relationship with Denver and Mike Shanahan.  No decisions have been made reletive to the 2007 Oakland Raiders nor will they be made for some time.  Adam Schefter could not have gotten his information from a 'reliable source' because there's only one reliable source and he doesn't trust Adam."

Doe it get any better than that?  To his credit, Schefter simply pointed out that no where in the statement did it deny the fact tehat Shell would be gone.  If Schefter is such a 'flase rumor monger' come out and give your embattled head coach a vote of confidence.

I was never a big fan of Schefter when he covered the Broncos and I must say I think less of him on NFL Network, but in this case it appears his information is accurate, and hey, if his old allegiances in Denver entice him to take a shot at our arch-enemy, so be it!