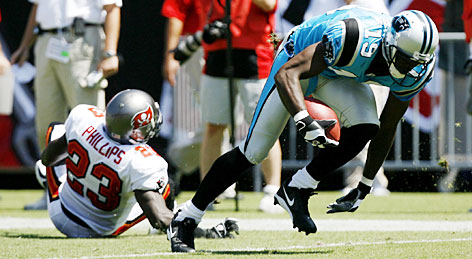 Could Johnson Help The Broncos?

By now you have heard that the Carolina Panthers kicked Keyshawn to the curb in Carolina. I find it hilarious that Johnson spent all off-season telling anyone who asked that he thought Dwayne Jarrett should go back to USC. That Dwayne Jarrett wasn't ready for the NFL. That Dwayne Jarret needed to get tougher. In the end, the Panthers drafted Jarrett, causing a sweet situation during the draft when Johnson actually interviewed his "teammate", kissing his ass in the process, only to be cut becuase the Panthers drafted Jarrett. Sweet irony at it's best....

Anyway, like him or hate him, Johnson is still productive at 34 and is an intriguing player for the Broncos to consider. Johnjon still has great hands, and let's face it, the Broncos receiving situation isn't exaclty a sure thing after Javon Walker.

Here are Johnson's numbers last season and during his career --

Obviously the Broncos don't have a ton of money to spend on Johnson, but if Keyshawn means it when he says he wants to help a team win the Super Bowl the Broncos might just be an option for him. It is quite possible the Johnson could wait until training camp, "hope" that soomeone gets hurt and then jump at the best offer, but that is risky at best and if Johnson is going to have an effective season he needs to get into someone's camp now.

What do you guys think, would you like to see Johnson in Orange and Blue???