Day 1 of Mini-Camp is in the books, and more than anything the return to the field offers the media a chance to talk to Coach and the Quarterback to get their thoughts on anything and everything...

Here are some of the quotes from Day 1 --

On preparing for training camp -

"It feels pretty good because you have two sessions of seven-day workouts and almost all of the guys have a good feel for the system minus a few. Today we did something a little different. We worked on the two-minute offense and four-minute, goal line--situations we haven't gone over. It wasn't just a review of situations we have been over. It was a good workout today."

On taking time off -

"I try to work time off in. The players get some time off, usually like a month-and-a-half to two months. Hopefully it is not two months. During the offseason, we work on free agency and the draft, but right now is when we get some free time. Sometimes we come back in the middle of our vacations to make sure the guys are working hard and getting back into football doing running, lifting and football-related drills. It is a good break for the coaches, and I think the players like it as well."

"It has helped a number of our players, including Byron Chamberlain and Matt Lepsis, who both played well for us. I think it is a good experience for the players."

"I didn't get a chance to see him. We will take a look at some film today and see how things went. It is going to take him a while. He hasn't been in camp, and he really doesn't know our system so we will get a chance this week to get him some work. We will all be here and have a chance to work with a lot of young guys that have only been a part of our organization the last few months."

On his impressions of QB Jay Cutler -

"He is undefeated this year. He has done a really good job so far and he has worked extremely hard since April and hopefully he can keep it going. This is a growing process, and he is maturing by working extremely hard. Hopefully the learning curve keeps going and he plays well. There are so many things to work on, but we need to make sure that we give him a supporting cast with a good running game, play-action and drop-back game. A quarterback can't do it all, and hopefully we have the supporting cast to take a little bit of pressure off of him."

On Cutler learning from other quarterbacks around the NFL -

"I have had the opportunity to be around some of those greats. I know what they are thinking and how they react. All of these quarterbacks talk to each other and pick each others brains. Guys like John Elway, Joe Montana and Steve Young are all guys that I have been around in my time. They are great ones and Hall of Famers. These guys are all constantly trying to learn. At the Pro Bowl, it is the same way. The guys that want to learn are going to ask questions, and Jay has been doing an excellent job. I give each guy the number of all of the other guys on the team. These guys are grown men and they are going to ask each other questions. We concentrate on what we are doing and they guys that want to learn will ask questions."

"Sometimes it is an unconscious mistake. Sometimes a guy doesn't know that he is making a mistake and he makes one. If you slip up once and you don't know what you are putting into your body, you are going to pay the price. Each player is responsible for what he puts in his body." 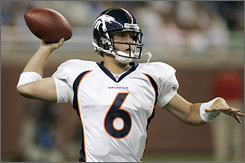 On having extra time off after missing the playoffs in 2006 -

"We didn't make the playoff last year unfortunately, so we had a little more time off than this group's accustom to. But once we start offseason workouts, we're pretty much going until late in the season."

"We got kind of a late mini camp. We'll finish up this week and have a little time before camp opens up, but this is what we get paid to do so it's a job."

"I'm just studying and stuff and just seeing were I made a lot of mistakes last year with foot work and lack of patients and just being a better quarterback. Last year was a learning experience for me, so there`s a lot of stuff I need to work on and as I play more games and get more experience as the season comes."

On his outlook on the season -

"It's going to be fun. We've got a lot of weapons and did a great job bringing guys in like Travis (Henry) and we got Javon (Walker) and Brandon Stokley, Brandon Marshall, we've got Tony (Scheffler)... We've got guys all over, so it's going to be a struggle to get everyone touches, and I think that's probably going to be the biggest thing but with Mike (Shanahan) having such an offensive mind, he's going to be able to create a lot of stuff with the offensive weapons that we have."

On if WR Javon Walker's mohawk hairstyle helped his speed

"Maybe (by) a couple tenths. He looked pretty quick out here."

On how he feels about being the leader -

"It's been a lot of fun with the acquisitions of the great guys on this team. It's fun to come to work when you know you have great guys around you. You have a great chance to do great things here, so I've enjoyed it so far."

"It's just a totally different situation. Last year, I came into a new team and a new offense in a backup quarterback roll and that's tough. I was trying to prepare each week and still trying to learn the offense and get used to the city and the team, so this year it's a whole different ballgame."

On the pressure of being the starting quarterback -

"I don't know. There was a lot of pressure last year, being thrown in there in the middle of the playoff race, and that's tough as a rookie. I think this year the pressure is going to be there. There will be a lot of guys on this team that will help out, and I feel a lot more confident."

On learning the offense -

"With Mike (Shanahan) always sitting back there watching and critiquing, he's so much further ahead of me brain wise with this offense. It's tough stuff, but I feel comfortable with it. I feel I've got a lot of the basic stuff down, a lot of the stuff I didn't have last year. I'm able to put some things together that I wasn't able to so it's always going to be a learning process, but I think I'm catching up to it."

On his expectations of himself -

"I haven't really sat down and thought about that. I'm going to go out and do my job and hopefully throw touchdowns and help this offense put up a lot of points, but I think that's all going to take care of itself."

On advice from other quarterbacks around the league -

"I think Patrick (Ramsey) coming here and (Brandon) Stokley, I think those guys... Patrick's been in the league and Stokley has been with Peyton (Manning), so I've talked with those guys a lot and I've talked to a lot of guys on the team. You talk to a lot of guys and they all say the same stuff. You just have to prepare and get ready each week because it's a tough week."

On the responsibility of being a starting quarterback in the NFL -

"I don't even think about it. It's been like that for a long time, it's going to be like that in the future, so what is my record two and three now, I think Mike's (Shanahan) is a little bit better than mine. I'll think about that 10 or 15 years down the road. I'm just worried about that first game against Buffalo."