According to USA Today, the NFL will change their logo.  You can see the change below -- 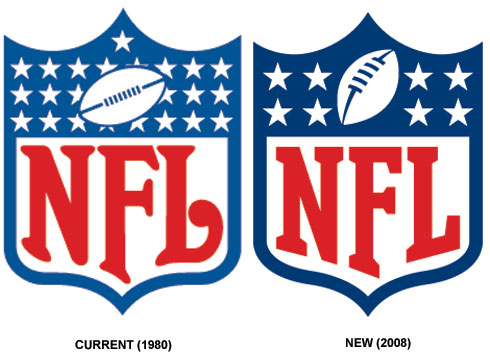 According to the report, the NFL is looking to make an "evolutionary, not radical" change.  Below are the specifics of the change --

The league is creating a leaner, meaner version of the iconic logo that will debut at the NFL draft in April, 2008. The revamped shield will be slightly taller and thinner, with a new football, fewer stars and darker colors, says Lisa Baird, the NFL's senior vice president of marketing. The redesign marks the first changes to the shield since 1980.

*The new shield features eight stars (representing the eight AFC and NFC divisions) vs. 25 on the current logo. Why 25? It's a mystery. After researching the shield's origins, the designers could find no reason for 25 stars, says Jaime Weston, director of brand and creative operations. The shield logo was first used around 1940, two decades after the NFL's founding in 1920.

* The football at the center has been redesigned to resemble the ball atop the Vince Lombardi championship trophy, says Baird. It replaces the old-fashioned pigskin nicknamed the "Hamburger" inside league offices.

*NFL vendors will probably thank the league for switching to fewer stars. Some vendors, without permission, have used fewer stars rather than shoehorning 25 tiny stars into smaller shields on hats and T-shirts.

Tinkering with one of the country's most powerful and ubiquitous sports brands will be a risky and expensive business. NFL sponsors such as Reebok, Riddell, Wilson and EA Sports will have to switch shields on everything from uniforms (players wear three logos at the neck and waistlines and on the helmet) and licensed merchandise to the official "Duke" game ball and Madden video game. Even groundskeepers will have to adopt the new shield at NFL stadiums.

I guess no one can claim the NFL is afraid of change....