Share All sharing options for: Tampa Bay Buccaneers @ Denver Broncos; Through The Years 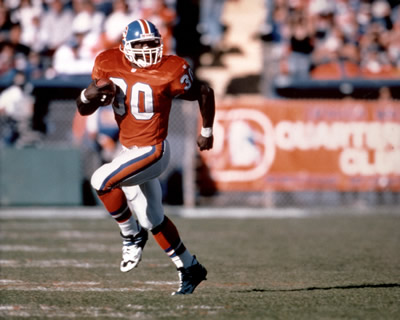 The Denver Broncos came into this matchup much the same way our current Broncos walked into Kansas City this past Sunday. They were totally full of themselves and were looking past the game in front of them to the next one. You do that in the NFL and nine times out of ten you will lose.

The 1996 Buccaneers were a joke, but what no one knew at the time was that a formidable team was being built. The team was still young and inexperienced, but in six seasons they would be Super Bowl Champs. Many of the stars on the 2002 defense were just talented wet-behind-the-ears rookies. And as most talented young players do, they play inconsistently. Well on this day, they all decided to play like all-pros. The game was a smash mouth affair with a plethora of turnovers on both sides, big plays, and plenty of "almosts".

The Broncos jumped out to an early lead by a Tyrone Braxton interception return of 69 yards off of an errant Trent Dilfer pass. In a year when the Broncos offense shined and the defense was often a liability, today it was the offense that struggled. That early 7-0 lead turned into a 13-10 deficit by halftime.

The Broncos offense finally got things moving in the second half on a nice Elway led drive that was capped by a seventeen yard touchdown pass to Anthony Miller with just under four minutes to go in the third quarter that put the Broncos up 20-13. Finally it appear the high powered Broncos were going to rise up and crush the lowly Bucs, but it wasn't to be. Just over a minute after that touchdown Trent Dilfer would pass for a huge forty yard touchdown to former Cowboy, Alvin Harper. Any early fourth quarter field goal by the Bucs put them up 23-20 in front of a stunned Bronco crowd.

The stage was set for the a coming out party for another youngster playing that day. This youngster, however, played for the Broncos and his name was Terrell Davis. After coming off a rather stellar rookie campaign in 1995, TD would have a breakout year in 1996. It all really started late in the 4th quarter during a Week 3 contest with the Broncos down 23-20. The Broncos got the ball at their own twenty yard line and marched down the field. The fourteen play drive would eat up a sizable chunk of the clock as Terrell Davis would pound the rock on twelve of those fourteen plays. The drive was, fittingly, capped by a 3 yard Davis touchdown run with just three and a half minutes left in the game. TD would finish with 22 carries and 137 yards and touchdown. He also had four catches for another 23 yards.

The Buccaneers would go on to a horrible 1-8 start before finishing out the season 5-2. While Denver would go on to lose at Kansas City the following week before ripping off nine straight victories en route to a 13-3 record and the AFC West Division crown. I think I am no longer going to compare 2008 to 1996, because that 1996 team dispatched of the bad football teams that crept up on them and our current guys could not. Perhaps Guru was right, we are in year three of a five year rebuilding plan. The next couple of weeks will tell the tale. If we rip of three straight wins then perhaps I was jumping my 1996-2008 ship too soon otherwise, I'll be looking forward to a Super Bowl championship in 2010 rather than 2009. The Denver Broncos hold a 4-2 all-time record over the Buccaneers. Here is a quick run down over the other four games these two teams have played:

November 7, 1976 - Thank you Broncfanstuckinsd for recalling the first game ever played between these two franchises. Here is his account of that game:

Denver behind the mind-numbing play of Steve Ramsey. (Who makes Patrick Ramsey look like an All-world QB) Led the Broncos to a 13-10 deficit. When the score was tied at 10 he trows a pick to a TB LB, but as luck would have it, or in the Bucs case no luck, he falls down as he is streaking towards the endzone. Denver’d defense holds them to a FG. Next offensive series Ramsey hits Haven Moses on 71 yard TD pass to put Denver up 17-13. After that it was all Denver, well mostly the defense. As Gradishar, and John Rowser both had a 31 and 32 yd int returns for TD, respectfully. Sanwhiched in between Lonnie Perrins TD run. To end it all Randy Poltl returned a fumble for 6. Denver ends up winning 48-13. The starting QB for those Bucs was former heisman throphy winner Steve Spurrier who would be last QB cut off the 1977 Denver Broncos team.

November 15, 1981 - The Broncos would be the Buccaneers 24-7 in their house en route to a 10-6 season that, ironically, would not give them a playoff berth while the Buccaneers would advance to the playoffs on a 9-7 record.

September 26, 1999 - One of the last games TD would play before the fateful knee injury while tackling some DB who intercepted Brian Griese. In a tough road loss, the Broncos would lose 13-10 en route to a 6-10 record, while the Bucs would go on to win eleven games and eventually losing in the NFC Championship game to the St. Louis Rams.

October 3, 2004 - A hard fought defensive struggle that would see a classic game winning field goal in overtime by Jason Elam. The Broncos would win, 16-13, on their way to an 11-5 record while the Bucs were falling hard and fast from their Super Bowl championship two years prior and would finish 5-11.