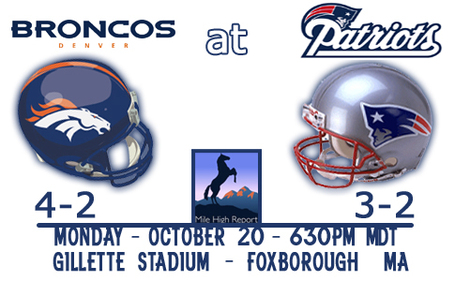 For the view from a Patriots fan, check out Pats Pulpit!!

Looking to earn their 400th overall victory and enter their bye week on a winning note, the Denver Broncos (4-2) visit the New England Patriots (3-2) this week for a Monday Night Football contest at Gillette Stadium. Kickoff is set for 8:30 p.m. EDT.

Denver saw its NFL-best six-game home winning streak snapped last week with a 24-17 loss to Jacksonville. Despite three first-half turnovers that led to 10 points by the Jaguars, the Broncos still had an opportunity to win the game but were forced to punt on three of their final four possessions.

For the second week in a row, the Broncos face a team coming off a Sunday Night Football appearance with their contest against the Patriots, who lost at San Diego by a 30-10 margin. The Chargers took a 10-0 lead in the first quarter and held the Patriots to just 4.4
yards per play (68-299).

Since 2001, when the Patriots won their first of three Super Bowls in a four-year period, the Broncos are the only team in the NFL with a winning record against New England in regular season and postseason play combined. Denver is 5-1 (.833) against the Patriots since 2001 while the rest of the NFL is a combined 26-102 (.203) versus the club during that time.

The Broncos hold a one-game lead over the Chargers atop the AFC West and feature an offense that leads the NFL in first downs (136) while ranking fourth in the league in yards per game (399.7). Quarterback Jay Cutler, who has thrown for an AFC-best 1,694 yards, has benefited from an offensive line that has allowed just two sacks in 231 pass plays for an NFL-low 0.9 sack percentage per pass play.

DENVER 17, at NEW ENGLAND 7 (Sept. 24, 2006)
Denver improves to 24-1 since 1995 when holding an opponent to seven points or fewer in the regular season with a 17-7 win at New England as the Broncos became the first team since the 1942 Chicago Cardinals to not allow a touchdown in 11 consecutive quarters to start the season... Denver's streak without allowing a touchdown ends at 175 minutes and 57 seconds when Patriots QB Tom Brady connected with WR Doug Gabriel for an 8-yard touchdown pass with 9:13 to play... Denver holds New England to 4-of-16 (25.0%) success on third downs, including a 1-of-8 (12.5%) mark in the second half... Denver improves to 5-1 against the Patriots (inc. postseason) since 2001 and is the only team in the NFL to have a winning record against New England during that time... The loss for New England is only its fourth in its last 27 contests at Gillette Stadium.

DENVER 28, at NEW ENGLAND 20 (Oct. 16, 2005)
The Broncos outscore the two-time defending Super Bowl champions 21-0 in the second quarter... Denver posts 247 yards of total offense in the second quarter, which marked the highest net yardage in a quarter during the Mike Shanahan era (1995- Present)... The win is Denver's sixth in a row against a Super Bowl participant from the previous season and fifth overall victory... Broncos RB Tatum Bell posts his second consecutive 100-yard rushing performance (114 yds.)... Denver extends its franchise record streak without a turnover to four consecutive games, tying the NFL record.

NEW ENGLAND 30, at DENVER 26 (Nov. 3, 2003)
The Broncos take a 24-20 lead into the fourth quarter but are outscored 10-2 (safety) in the final period on Monday Night Football... Broncos QB Danny Kanell starts in place of Jake Plummer (left foot) and throws for 163 yards with one touchdown and one interception... Denver CB Deltha O'Neal returns a third quarter punt 57 yards for a touchdown while RB Clinton Portis gains 111 yards rushing... Patriots QB Tom Brady throws for 350 yards with three touchdowns, including a 66-yard strike to WR Deion Branch, and one interception.