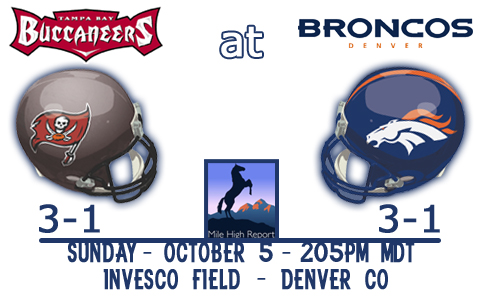 This is going to be one heck of a ride. We've gotten past some good teams (SD and NO), beaten down the Raiders, and got shocked by the Chiefs. Going into this TB game, I have some things I'm confident about, and frankly, some things I'm concerned about. TB is a 3-1 team just like we are, but with a glaring difference. They have some balance.

TB is perhaps a top ten team right now in my opinion, and this game could be a solid measuring stick for just how good we are. We only lead SD by one game in our playoff race, so it's a very significant game.

Can our young guys bounce back from a loss like pros? Can our secondary attack an INT prone Griese? What can we exploit, and what should we avoid?

You've come to the right place. MHR has you covered.

Let's take an overview of the TB team. They are a solid team, and should be a problem for anyone.

They run the Tampa-2 system on defense, but do so with any drop off in stopping the run (just ask the zone block run system Green Bay Packers, who ran into a brick wall).

They have one of the best defensive coordinators that money can buy. They have a star studded defensive line, and linebackers that most teams would kill for. The system makes the DBs look good too.

On offense things are a little shaky, but not bad. The WRs have bobbled a few balls, but they catch enough to win games. Griese may be a joke in Denver, but aside from a few INTs, he's been slinging the passes pretty well for Gruden. Well enough to win the three games he's started.

TB's lone loss was with another QB at the helm, and against a NO team that was healthier than when we played them almost to a draw. This is not a good game to take for granted.

Here's what you need to know: These guys are good.

Three of the front four are names many fans will recognize (Carter, Hovan, and Gaines Adams). Brooks, Rudd, and Cato June make up the linebacking corps. Buchannan and Barber at CB are both names you'll recognize too.

The names you may not notice are Jackson and Phillips at safety, but they are very solid. Piscetteli (a safety coverage specialist) is likely out with an injury.

GB runs a zone block running scheme that is pretty similar to our own (not as much one cut running), and TB completely shut them down. TB is also a team that is good at forcing INTs, and pressuring the QB. This is a very capable defense with few weaknesses.

Aaron Rodgers of GB was flying high until he ran into TB. TB's physical team hounder Rodgers, intercepted him, then busted his shoulder. Yikes! GB was a team that knows how to run the ball, and expects to be over 100 yards a game. They didn't come close.

What does Denver do to answer the defense that is named for the team we are up against?

When playing against the Cover 2 systems, teams try two approaches. One is to run the ball, but TB has a front seven that shuts down runs (no safeties in the box for these guys!)

The other approach is classic. The weakness in the pass defense of cover two systems is in the "seams", the magical area between the OLBs and the CBs. This means short passes, but high completion percentages (which is exactly what the cover-2 bend don't break systems want). This is typically exploited with the TE positions, and the good news for Denver is that we have three TEs that know how to catch the ball.

Another advantage for Denver is Marshall. While TB's CBs are good at what they do, they may have a rough time bringing down a physical receiver like Marshall. WIth Cutler's quick releases, completions shouldn't be a problem.

I see three potentials for major problems with our pass game.

Denver can mitigate the first issue by using more misdirection. Gruden is no slouch, and has seen Denver's misdirections as a coach for oakland (though his record against Shanny is atrocious). Somehow, I don't expect Bates to go this route much. Bates seems sold on the new "spread offense" look that Denver has been sporting, and I am guessing that he challenges the TB secondary head on.

The second issue is up to Jay. I have little doubt that he is working on looking off his passes, but we'll see how it goes.

The third issue is my favorite. If Denver can protect Jay from the TB rush, they should be able to protect Jay all season.

The best news? Despite the talent on the TB team, they are ranked 21st in pass defense. This is due in part to having leads in games, and being able to hut down runs though. Drew Brees carved up the TB defense, and I think Cutler can too.

Things are tricky to predict here. Denver's defense has its defenders and its detractors. Some will point to the KC game, the stops made by the defense, and the turnovers that made life rough for the defense. Others like to point to the sheer number of yards and points that this team gives up game after game. There's enough truth to go around.

Let's start with a premise. The Denver CBs are better than the TB receivers. Let's go to another premise. Griese is an interception waiting to happen. Still with me? Well, here's where it gets muddled...

Does anyone expect Denver to finally get it's pass rush going in this game? Will we continue to rush (only) three guys? Will we continue to put a safety in the box to stop the run, and will we play our cover cornerbacks in zones well off of the receivers (instead of tight man coverage)?

Here's another concern. TB RB Graham has the eighth most yards rushing in the NFL with 334 yards (5.9 per carry).

TB should challenge the Denver run defense. If they can establish the run, they can wear down Denver, take the crowd out of the game with long drives, and keep Cutler off of the field. A lot of teams might throw the ball on Denver's "bend don't AND break" defense, but Griese has been throwing three INTs a game lately, and I don't think he should try the deep passes that other QB's try.

Folks who read Chalk Talk know my bias. Denver needs to drop back the SS to cover the deep zone (this is NOT cover two - see the accurate description here), play the CBs in man coverage, and force the front seven to play their own roles.

I don't know if Denver will have fixed the pass rush in practices or not. A pass rush on Griese will lead to INTs. Lack of a pass rush will allow Griese to play pretty well (in my opinion). I doubt Denver let's the strong safety fall back though. Pray to God that Slowik at least lets the CBs cover the WRs tight.

The duel between the Denver offense and the TB defense should be a great battle of minds and brawn. The battle of the TB offense against the Denver defense will all hinge on how Denver approaches this game. If they play the way they've been playing, I expect the game to be close. If Denver can step up the defense, I think Denver can win this game comfortably.

RB - Even (and here's why. While E. Graham has great numbers in yards, Denver's RBs have more TDs and better YPCs. Denver doesn't run the ball too much, but if they did, they might have great yards too)

WR - DEN (Marshall and Royal both in the top ten of WRs. Marshall is #1, despite missing the first week).

Coaching - DEN (at head coach. I like TB's unit coaches better than ours, including the great Monte Kiffen).

I expect Denver to carve up the TB secondary (just as Drew Brees did). Denver can go the easy route and use 2 TE sets and hit the seams on boths sides, or use the TEs for extra protection against a strong TB front 7. Graham will be a key defender in this game, whether he is used to receive or not.

If Denver runs the ball, then TB will be the real test. Remember, they shut down a good zone block team with GB last week. Pittman's short yardage runs will be much more difficult. If Denver can run against TB, they'll run well all season.

Griese and his receiving crew do enough to win games, but they do it ugly. Denver's big chance to rack up turnovers is in this game.

Denver's other test is E. Graham and the TB run game. A real defense can stop him, and Denver needs to answer the challenge.