Share All sharing options for: Miami Dolphins @ Denver Broncos; Through The Years 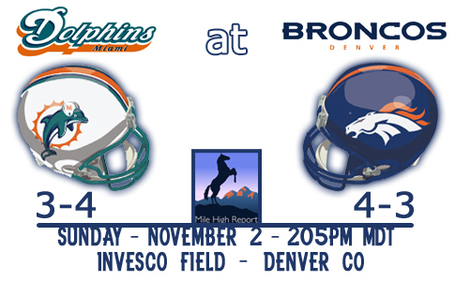 For Everything Dolphins Related, Check Out The Phinsider

This rivalry has not been kind to the Broncos.  With just three regular season wins against the Dolphins, the Broncos must buck the trends this weekend if they are to come out on top.  Two of those three wins came in the 60's!  Since the NFL merger, the Broncos are a laughable 1-7-1 during the regular season, which includes 1-3-1 at Mile High Stadium.

I obviously will not be discussing any games that were played in Miami since the Broncos are 0-7 all-time(not counting Super Bowl 33) in that town and none of the home regular season games really stand out so I had to look at the sole playoff game these two teams have played.

The Broncos pressed the idea of perfection in the 1998 season, but after stumbling two games around to fall to 13-2 which included a Monday Night embarrassment in Miami the Broncos won their final game and awaited the rematch with the Miami Dolphins in the AFC Divisional Playoffs. 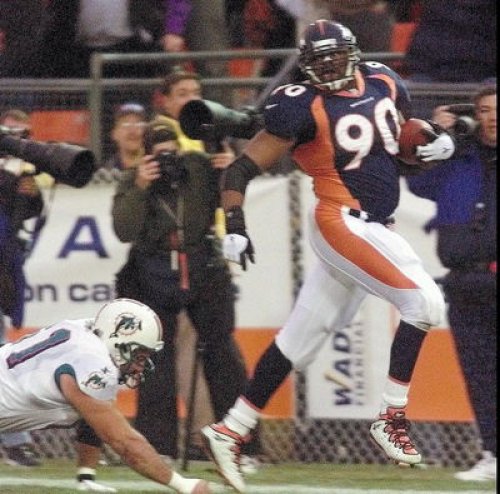 The defending Super Bowl champion Broncos were more than a little miffed about the domination they endured at the hands of Marino and the Dolphins in Week 16 of the regular season.  It was made worse by the national audience that witnessed the catastrophe.  No group on that team took the defeat harder than the offensive line which had produced just 29 yards rushing for Terrell Davis during that Monday Night Football game.

The Broncos in the playoffs came out not only to win, but to dominate.  Their first drive was reminiscent of the early season Broncos.  A wonderful fourteen play, 92 yard drive that ate up nearly eight minutes on the clock.  John Elway was an efficient five for six with 48 yards passing, while Terrell Davis ran rough shot on seven carries for 38 yards.  The drive was capped off by a one yard touchdown run by Davis.

On their next drive, the Broncos went 66 yards on just four plays in just over two minutes.  Big Eddie Mac had a diving 30 yard catch followed a few plays later by a 20 yard touchdown run by TD.  Miami's only offensive success of the day came next, but a goal line stand at the two yard line held the Dolphins to a field goal.

The route was on after another long drive of eleven plays and 87 yards.  TD led the way in the first half with nearly 130 yards rushing and two touchdowns.  The Broncos were up 21-3 at halftime.  Unlike the 21-3 blown leads of 2008, the Broncos of 1998 would keep the route going in the second half to bury the Dolphins in an orange and blue coffin.

On the first play of the second half, Terrell Davis would break out for a 62 yard run that led to a field goal.  TD would finish with 21 carries and 199 yards when he was pulled in the fourth quarter following some leg cramps. John Elway would add a 28 yard touchdown pass to Rod Smith early in the fourth quarter to put the Dolphins away.

With the score 31-3 midway through the fourth quarter, the Dolphins were driving and hoping to close the gap some.  A fumbled reception would be picked up be Neil Smith and the big man would rumble for one of the longest 79 yard runs in NFL history.  That would be the final nail in the coffin for the Dolphins hopes for a Super Bowl run as the final score would be 38-3. The Broncos would continue on to the AFC Championship game where they would go on to repeat as Super Bowl Champions. I'll take a 3-10-1 all-time regular season record against the Dolphins, if it means we will forever remain undefeated against them in the playoffs. However, in 2008 it will be imperative that we win that fourth regular season game all-time against Miami for the fate of our season may hinge on this game and the next two after.