Share All sharing options for: Jacksonville Jaguars @ Denver Broncos; Through The Years 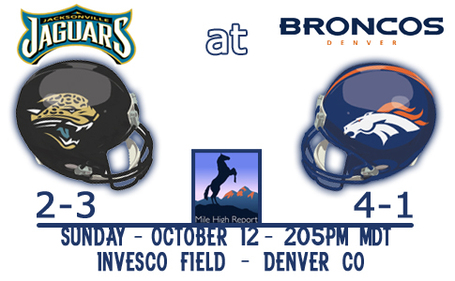 This week was easy for me.  Sure, there were plenty of great games between these two teams, but none sticks out to me as much as the 1997 Revenge tour the Broncos took all the way to the Super Bowl.  Now I by no means picked this game because it was the first playoff victory that led our team to its first Super Bowl titles.  No way, no how.  I chose this game because of one reason...Hatred.

Anyone out there born before 1990-91 and has been a Bronco fan since remembers the 1996 Season.  The Denver Broncos that year were the class of the league at 13-3 with homefield advantage throughout the playoffs.  Then, in comes this weird looking uniform of some expansion team no one had heard of two years before.  The 9-7 Jacksonville Jaguars were having a a dream season and came into Denver with a swagger and a quiet confidence that no one realized they had until after the 30-27 upset of the Broncos. 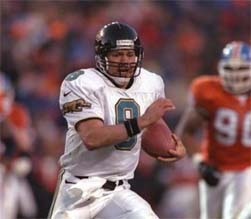 In case any of you have forgotten, there is the hatred I was referring to.  Embodied in the form of a mobile quarterback named Mark Brunell.  The Broncos got busted in the mouth that day.

So as fate would have it, the Broncos and Jaguars would meet again in the playoffs the following year.  The Jaguars were a much better football team at 11-5 and the Broncos struggled towards the end of the season falling a game shy of the Division Title.  Nearly every player on the squad in 1997, was on the squad in 1996 when the Jaguars came into Mile High Stadium and shocked all of Colorado and indeed the entire nation, so there was a swagger and a quiet confidence again in 1997.  Except this time is was coming from the Denver Broncos and they were focused completely on Mark "freakin" Brunell and the Jacksonville Jaguars.

The Broncos dominated the line of scrimmage from the beginning.  Long drives in the first half led to two Terrell Davis touchdowns and a long bomb to Rod Smith that helped the Broncos jump out to a 21-0 lead.   Then things got a little strange.  Though the Broncos continued to dominate the time of possession, turnovers and costly mental errors helped the Jaguars cut the lead to 21-17 after a whacky blocked punt returned for a touchdown.

The veteran Bronco team, though, would not give in and would ultimately control the clock for over FORTY minutes and gain over THREE HUNDRED yard rushing and five rushing touchdowns.  This game was quite possibly the most dominating performance by any offensive line in Broncos history.  We had two 100 yard rushers that day as TD had 184 yards rushing and Derek Loville brought another 103 yards.  It's amazing that the Jaguars even got the 17 points they ended with as they were out classed in every facet of the game. I won't even go into previous match ups as I feel strongly enough about this game that I don't feel the need to water it down with any other.  I remember this game being one of the most dominating performances I had ever seen from a Bronco team.  I felt then that this team was going to win a Super Bowl.  And I felt that not just with the homer fan in me, but with real conviction and belief.  Though I must admit, this victory did little to sway my hatred of one Mark Brunell and the Jacksonville Jaguars!