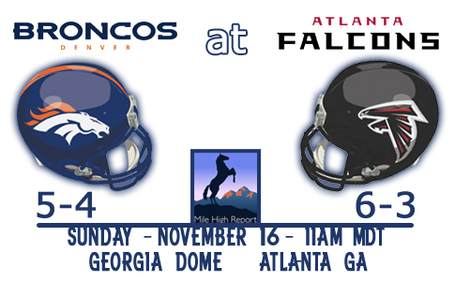 Winners of their last three games against NFC teams, the AFC West leading Denver Broncos (5-4) make their first visit to Atlanta since 1997 this week to play the Falcons (6-3) on Sunday. Kickoff is set for 1 p.m. EST, and the game will be televised by CBS with Kevin Harlan and Rich Gannon calling the action.

In its 34-30 comeback win at Cleveland last Thursday night, Denver erased a 23-13 fourth-quarter deficit and tied for its second highest single-game yardage output (564) in club history. The Broncos' win against the Browns snapped their three-game losing streak and maintained their one-game lead atop the AFC West over 4-5 San Diego, which visits Pittsburgh on Sunday.

The Broncos play an Atlanta squad this week that is coming off a 34-20 win at home against New Orleans on Sunday. Led by a first-year head coach (Mike Smith) and a rookie quarterback (Matt Ryan), the Falcons have won four of their last five games and own a 4-0 record at home this season. Denver is making its first visit to Atlanta since 1997 and has not played the Falcons since 2004 (41-28 home loss).

The Broncos' offense has been one of the most productive in the NFL this season with the club ranking second in the league in yards per game (395.1), third in yards per play (6.2) and sixth in both third down (45.5%) and red zone (61.3%) success. Quarterback Jay Cutler, whose five 300-yard passing games lead the AFC and tie Denver's single-season record, has benefited from an offensive line that has given up the second-fewest sacks (7) in the league.

Additionally, wide receiver Eddie Royal has been a key part of the Denver offense and has emerged as one of the NFL's top rookies. The second-round pick from Virginia Tech University leads all rookies in receptions (52), receiving yards (625), receiving touchdowns(4), punt return average (12.7) and combined yardage (1,027). He was one of an NFL-high four Denver rookies (LT Ryan Clady, FB Peyton Hillis, P Brett Kern) who appeared on Gil Brandt's NFL.com Midseason All-Rookie Team.

ATLANTA 41, at DENVER 28 (Oct. 31, 2004)
Despite a record-setting day offensively for the Broncos, the Falcons rallied from an early 14-3 deficit to top Denver, 41-28, at INVESCO Field at Mile High... QB Jake Plummer connects with Rod Smith for an 80-yard touchdown, the longest reception of the veteran receiver's career... The pass also tied Plummer's career long...Plummer finishes the day completing 31-of-55 passes for a career-high and Broncos' record 499 yards passing while tying his personal best with four touchdown passes but also throwing three interceptions... Smith set a career high with 208 yards receiving on nine receptions, which ranks as the franchise's second-best single game output (214 by Shannon Sharpe vs. Kansas City 10/20/02)...

at DENVER 42, ATLANTA 14 (Sept. 10, 2000)
The Broncos even their record at 1-1 with a 42-14 win over the Falcons at Mile High Stadium... It was Denver's consecutive victory over Atlanta, extending the longest victory drought for any team in the NFL against them to 18 years... Rookie running back Mike Anderson, starting for the injured Terrell Davis and Olandis Gary, fills in admirably by accomplishing something neither Davis or Gary could in rushing for more than 100 yards in his first career start...Anderson gains 131 yards on 31 carries (4.2) and two touchdowns...Anderson balances QB Brian Griese's second consecutive strong outing, connecting on 20-of-33 passes for 268 yards with a career-high tying three touchdowns... WR Rod Smith reeled in two of the scores and totaled 117 yards on seven receptions... Smith tied Rick Upchurch (267) for ninth place all-time in receptions by a Bronco and went above 4,000 yards receiving for his career... The Broncos recorded six sacks in the game.

DENVER 34, at ATLANTA 19 (Jan. 31, 1999) Super Bowl XXXIII
The Denver Broncos clinch their second consecutive World Championship with a 34-19 victory over the Falcons in Super Bowl XXXIII at Miami's Pro Player Stadium... Denver becomes just the sixth franchise in NFL history to win back-to-back Super Bowl titles and posts the seventh repeat championship in Super Bowl history...QB John Elway claims the game's Most Valuable Player award by completing 18-of-29 passes for 336 yards (third most in Super Bowl history at the time), including an 80-yard scoring toss to Rod Smith that tied for the second-longest TD pass in Super Bowl history...Elway also runs for a 3-yard score in the fourth quarter, making him the the oldest player (38) to score a touchdown in the Super Bowl, eclipsing the mark he set a year earlier by scoring in Super Bowl XXXII... RB Terrell Davis sets an NFL record with his seventh consecutive 100-yard game in the postseason (102 yards)... The Broncos' defense chips in with two sacks and four takeaways, including two interceptions by Darrien Gordon, who sets a Super Bowl record for most interception return yards in a game (108).

DENVER 29, at ATLANTA 21 (Sept. 28, 1997)
The Broncos win a 29-21 decision over Atlanta in the Georgia Dome... QB John Elway completes 18-of-33 for 243 yards with three touchdowns, including six connections with TE Shannon Sharpe for 119 yards with one score... Sharpe hauls in a 65-yard touchdown pass from Elway on the fourth play from scrimmage en route to opening a 23-0 lead... WR Willie Green and FB Detron Smith also post touchdown receptions for Denver... The Broncos' defense swarm Atlanta's quarterbacks, sacking them a total of four times for 26 yards... Broncos CB Darrien Gordon steps in front of Atlanta QB Chris Chandler's pass and returns the takeaway 20 yards in the third quarter.