Share All sharing options for: Denver Broncos @ Atlanta Falcons; Through The Years 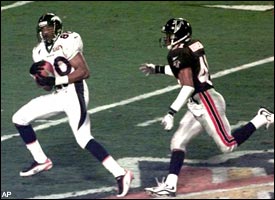 The Bronco organization fired Dan Reeves in 1992 and moved in a different direction that eventually led to the hiring of Mike Shanahan as head coach in 1995. A Super Bowl dynasty quickly followed. Dan Reeves, on the other hand, would go on to coach the Atlanta Falcons who would have a Cinderella season in 1998, finishing 14-2 and shocking the world by beating the heavily favored 15-1 Minnesota Vikings in the NFC Championship game. The Denver Broncos began the season 13-0, finishing 14-2 and steamrolled their way through the playoffs into the Super Bowl.

I recall biting through my finger nails like crazy watching that NFC Championship game. I really felt that the Broncos defense matched up very well against the Falcons, while our defense matched up very poorly against the passing attack of the Vikings. I never doubted the Broncos ability to beat the Vikings, but I preferred an easy Super Bowl win to a tough one. To me the Minnesota Vikings would have represented a tough Super Bowl, while the Atlanta Falcons were an easier opponent to face. Of course, as a Bronco fan, I will never take any Super Bowl for granted and the nerves for this game were as high as they were the year before.

Those nerves quickly vanished as the Broncos took control early with a Howard Griffith touchdown, followed by a field goal by Jason Elam. The score was 10-3 when the Broncos turned the Super Bowl into a rout. Falcons safety Eugene Robinson had bit hard on a slant route earlier in the first half, so Mike Shanahan and company devised a play to exploit his eagerness. John Elway hit Rod Smith on an 80 yard bomb to blow the game wide open.

The Broncos went into halftime with a 17-6 lead and both teams came out cold in the third quarter. It was nearing the end of the quarter when the Broncos finally got something going. Howard Griffith would score his second touchdown of the game on the first play of the fourth quarter to increase the Bronco lead. The Broncos got the ball right back and John Elway would seal the victory on a three yard scamper to put he Broncos up 31-6 with just over ten minutes left in the game. 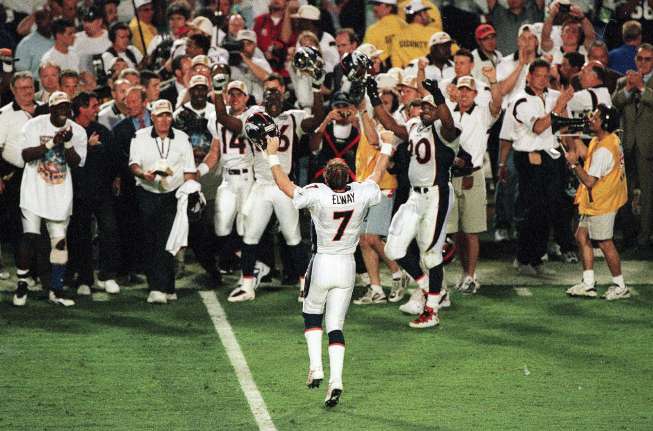 The Atlanta Falcons would go on to score some garbage time touchdowns late to make the score appear respectable, but there is no doubting they were utterly dominated in the game. The Falcons committed four turnovers and didn't find any rhythm on offense until it was too late. The Denver Broncos would win their second Super Bowl title in as many years.

Perhaps the only issue I had with this game was the selection of a MVP. John Elway was my childhood hero and it felt great to see him get that Super Bowl MVP and he deserved it with 336 yards passing and a passing and rushing touchdown, but I felt his Co-MVP was Darrien Gordon. Not only did he set a record for most interception return yards, but his interceptions came at very opportune times for the Broncos. I think that if he had returned one of a touchdown that he would have at least gotten a Co-MVP award. It's not like I think he was more deserving than John Elway, but he certainly made a huge impact on the Broncos winning that game.

In a way, Super Bowl XXXIII meant more to the Bronco organization and its fans than the first one. Super Bowl XXXII was a vindication of all the past Super Bowl defeats and the Bronco teams of old. However, this Super Bowl against the Falcons was an affirmation of sorts to that first Super Bowl victory. It was a game that stated to the world that we deserved this and we have earned it through decades of dedication. The fans were rewarded with the best performance ever put on by a Bronco team and the honor of repeating as Champions.