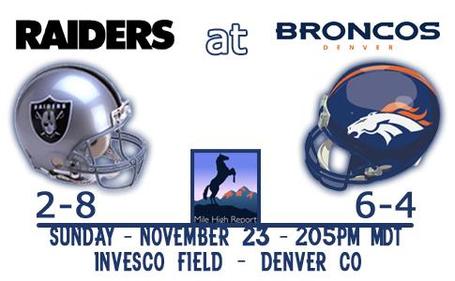 After earning comeback road wins during each of their last two games, the Denver Broncos (6-4) return home this week to face the Oakland Raiders (2-8) on Sunday. Kickoff at INVESCO Field at Mile High is set for 2:05 p.m. MST, and the game will be televised by CBS with Dick Enberg and Randy Cross calling the action.

Denver is coming off a 24-20 win at Atlanta on Sunday against a Falcons squad that entered the game undefeated (4-0) at home. The Broncos trailed 20-17 in the fourth quarter before driving 83 yards in 10 plays for tight end Daniel Graham's 9-yard touchdown grab with 5:35 remaining that proved to be the game-winning score.

Winners of their first game against Oakland this year by a 41-14 margin on Monday Night Football in Week 1, the Broncos on Sunday look to sweep their season series with the Raiders for the ninth time in Mike Shanahan's 14 seasons as head coach (1995-Pres.). Shanahan owns a 21-6 (.778) career record against the Raiders, who have lost their last four games and last week at Miami were unable to hold onto a 15-14 lead with five minutes remaining in their 17-15 defeat to the Dolphins.

The Broncos enter this week's game with a two-game lead atop the AFC West over San Diego (4-6), which hosts Indianapolis on Sunday night. Denver has held the outright division lead following every week this season, marking only the second time in club history (1997) that it has been alone in first place through each of its first 10 games of a season. The team joins the 10-0 Tennessee Titans (AFC South) as one of two clubs in the NFL this year to own sole possession of first place in their division following every game.

While a team's turnover ratio often is indicative of its success, few teams in the NFL have proven that like the Broncos this year. Denver is 5-0 during the regular season and 7-0 including the preseason in games in which it posts an even or positive turnover ratio.

Seven different Broncos rookies have combined to make a total of 28 starts for the club this year. That group includes Spencer Larsen, who last week at Atlanta became the fourth player in the NFL since 1990 and the first player in Denver history to start the same game on both offense (fullback) and defense (middle linebacker).

DENVER 41, at OAKLAND 14 (Sept. 8, 2008)
Denver improves to 31-17-1 all-time in season openers for a .633 winning percentage that is the third best in NFL history with their 41-14 win at Oakland on Monday Night Football... Broncos Head Coach Mike Shanahan improves to 12-4 in season openers for his career... Broncos rookie WR Eddie Royal finishes with the most receiving yards (146) and the fourth-most receptions (9) of any player in Week 1... Royal's 146 receiving yards are the sixth most by a player in his NFL debut in league history with those records dating back to 1960... The Broncos take a 27-0 lead into the fourth quarter... Denver holds Oakland to 2-of-12 (16.7%) success on third downs... Broncos QB Jay Cutler posts his third career 300-yard game as he completes 16-of-24 passes for 300 yards with two touchdowns (137.3 rtg.)... With T Ryan Clady and Royal in the starting lineup, the Broncos became the first non-expansion team in the NFL to start a rookie at both tackle and wide receiver in a regular- season opener in eight seasons (Pittsburgh in 2000).

at OAKLAND 34, DENVER 20 (Dec. 2, 2007)
Denver's loss to the Raiders snaps its four-game road winning streak against Oakland and its five-game overall winning streak against the franchise... The Broncos score a touchdown on their opening drive of the game for the third time this season... Denver's 83-yard opening drive was its longest of the season... QB Jay Cutler's 58-yard pass to WR Brandon Stokley in the third quarter was the ninth 40+yard completion of his career... Stokley (102 yds.) recorded the eighth 100-yard receiving game of his career (7th regular season) and first as a Bronco... Denver forces four fumbles for the third consecutive game, and the club recovers one (LB D.J. Williams).

at DENVER 23, OAKLAND 20 OT (Sept. 16, 2007)
For the second consecutive week, Broncos K Jason Elam kicks a game-winning field goal with his 23-yarder in overtime giving Denver the victory... Elam finishes the game with three field goals, including a 20-yarder with 2:18 left in the game to tie the score at 20... Denver has an individual 100-yard rusher (Travis Henry, 128) and 100-yard receiver (Javon Walker, 101) for the second game in a row... The Broncos outgain the Raiders 441 to 253 yards, including a 260 to 53 passing yard advantage... The 53 passing yards allowed by the Broncos marked the second-lowest total allowed by Denver in the Mike Shanahan era (1995-Pres.) Shanahan passes Pro Football Hall of Fame coach Hank Stram to move into sole possession of 10th place in National Football League history in career wins with one team (125).

DENVER 17, at OAKLAND 13 (Nov. 12, 2006)
Denver posts its fourth consecutive road win with its victory in Oakland, marking the club's longest such streak since it won six away games in a row in 1998... Broncos QB Plummer authors his 31st career game-winning or game-tying drive in the fourth quarter and 23rd "pure" comeback against the Raiders (Denver trailed 13-7 in the fourth quarter)... Broncos FB Kyle Johnson's 1-yard touchdown grab early in the fourth quarter proves to be the game-winning score... TE Stephen Alexander totals the most catches (6) by a Denver tight end in a game since the 2005 season opener (Jeb Putzier, 7 rec.)... Denver limits the Raiders to a 1.8-yard rushing average (26 att. for 46 yds.).

at DENVER 13, OAKLAND 3 (Oct. 15, 2006)
The Broncos extend their regular-season home winning streak to 13 games with their win against Oakland... Broncos K Jason Elam moves into 10th all-time in NFL history in career points scored (1,589) with seven (2 FG, 1 PAT) against the Raiders, passing Al Del Greco... Denver limits the Raiders to 20 plays in plus territory (past 50-yard line) for a net gain of 31 yards... Denver allows only one third-down conversion in the second half for the fifth consecutive game... Broncos DE Elvis Dumervil (2 sacks) posts the first multiple sack game by a Broncos rookie since Monsanto Pope had two against the Raiders on Dec. 22, 2002.