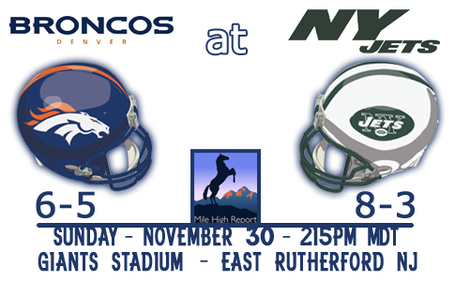 Holding a two-game lead atop the AFC West with five weeks remaining in the regular season, the Denver Broncos (6-5) will make a trip to the East Coast this week to face the AFC East-leading New York Jets (8-3) on Sunday at the Meadowlands. Kickoff is set for 4:15 EST, and the game will be televised by CBS with Kevin Harlan and Rich Gannon calling the action.

After winning two consecutive games on the road, the Broncos suffered a 31-10 loss at home to Oakland last week. Denver held the Raiders to 123 yards of offense and just 2.9 yards per rush in the first half, but Oakland broke open a 10-10 tie early in the third quarter by scoring touchdowns on three consecutive drives.

Despite the loss, Denver maintained its two-game lead for first place in the AFC West over the Chargers, who fell to 4-7 on the season after their 23-20 home loss to Indianapolis on Sunday night. Denver has held the outright division lead following every week this season, marking only the second time in club history (1997) that it has been alone in first place through each of its first 11 games of a season.

The Broncos face a Jets team that won its fifth consecutive game last week with a 34-13 victory on the road against Tennessee, which entered the contest as the NFL's lone undefeated team (10-0). New York held the Titans to three points through the first three quarters, building a 20-3 lead, and posted a 40:30-to-19:30 advantage in time of possession.

Aided by an offensive line that has helped Denver lead the NFL in sack percentage per pass play (1.9 / 8 sacks in 418 pass attempts), quarterback Jay Cutler has thrown for an AFC-best 3,036 yards. He has been protected by arguably the NFL's most productive tackle duo in rookie Ryan Clady (left) and first-year starter Ryan Harris (right). According to Stats Inc., they represent two of the NFL's three 11- game starters at tackle who have yet to allow a full sack.

Defensively, the Broncos are ninth in the league in yards per rush allowed (3.8) during the last four weeks, giving up 1.6 fewer yards per carry than they did during their first seven games.

at DENVER 27, N.Y. JETS 0(Nov. 20, 2005)
Denver's 27-0 win against the N.Y. Jets marks its first shutout since a 34-0 victory against Carolina on Nov. 9, 1997... The Broncos win their eighth consecutive home game to tie for the fourth-longest such streak in team history... Denver's five takeaways (3 FR, 2 INT) are its most in a game since 2001... The Jets set a Broncos record for fewest rushing attempts by an opponent with only seven... New York possess the ball for only 55 seconds (2 plays) in the second quarter... Broncos QB Jake Plummer extends his franchise-record streak of consecutive passes without an interception to 219, the fourth-longest streak in the NFL since 1996... Broncos RB Mike Anderson (3 TDs) scores a rushing touchdown for the fifth consecutive game.

DENVER 30, at N.Y. JETS 23 (Nov. 5, 2000)
The Broncos defeat the Jets on the road for the first time since 1993 after taking a 17-0 lead midway through the second quarter...The Jets tie the game at 20 on a 26-yard John Hall field goal with 5:24 left in the third quarter before Denver pulls away with consecutive scores (FG, 47-yd. TD to WR Ed McCaffrey)... Broncos RB Terrell Davis records his first 100-yard game (115) and first touchdown since suffering a right ACL injury a year earlier against the Jets... Broncos QB Brian Griese records his third consecutive 300- yard passing effort with 327 yards and two touchdowns... Denver WR Rod Smith tied a team record with his third consecutive 100- yard receiving effort (134 yds.).

at DENVER 23, N.Y. JETS 10 (Jan. 17, 1999 - AFC Chmp.)
Denver clinched its AFC-record sixth berth in a Super Bowl with its 19th consecutive home win... The Broncos score 20 third-quarter points to take a 20-10 lead into the final period after being shut out in the opening half... Broncos RB Terrell Davis gains 167 yards on 32 carries with a 31-yard touchdown run... Jets QB Vinny Testaverde throws for 356 yards but was held without a touchdown and intercepted twice by CB Darrien Gordon... The Broncos also recover four Jets fumbles for six total takeaways to set a franchise postseason record... Denver limits New York (RB Curtis Martin) to 14 yards on 13 carries (1.1 avg.).