Share All sharing options for: Denver Broncos @ Cleveland Browns; Through The Years 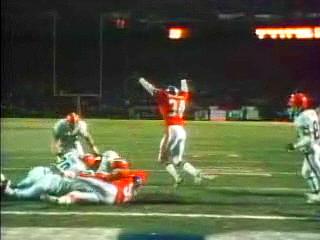 One of the greatest games in Bronco history will always be overshadowed by a game that took place almost exactly a year earlier. By the time the 1987 AFC Championship game came around, people around the country were still whispering about "The Drive". The coming out party for John Elway had happened a year earlier and the Denver Broncos were media favorites to win it all in 1987. Elway, coming off his NFL MVP season, had become one of football's best quarterbacks and the Broncos were dominating...in a paper tiger sort of way.

The thing is, the Broncos were not better the year before. The only difference was confidence and confidence is what led this team to believe they were better than they were. The Broncos came out and dominated in the first half. Their defense harassed and hounded Bernie Kosar for much of the first two quarters while John Elway led the offense to three touchdown drives.

People already began making plans for the Super Bowl. T-shirts and ball caps were being made. Bronco parties were turning into victory celebrations. A 21-3 deficit going into halftime against the Broncos defense of the 80's? Game over! The Browns were reeling, but as the Chargers of today found out when they replaced Marty with Norv, Schottenheimer knew how to keep games from being completely lost.

The Browns would strike first in the third quarter. Bernie Kosar would connect with Reggie Langhorne for an 18 yard touchdown to bring the Browns to within eleven points. John Elway would help/hurt his football team on the next series when he threw an 80 yard touchdown pass to Mark Jackson. This helped the Broncos by increasing the lead 28-10, but it hurt the Broncos because that was to be about the only rest the Broncos defense would get until midway through the fourth quarter. 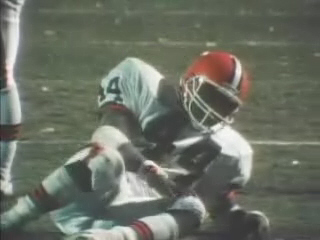 The Browns would score two more touchdowns to close the gap to 31-24. It was gut check time for both clubs and the Cleveland Browns struck first. Scoring on a 4 yard pass from Kosar to Webster Slaughter to tie the game up.

Then we get to witness one of John Elway's "fake" comeback victories according to a forum linked to a post by one of our good friends at The Phinsider. Take a look at this garbage for later angst. So according to their logic, this next drive had no significance to the outcome of the game. John Elway drove his team methodically down the field, eating up a large chunk of the fourth quarter, when he hit Sammy Winder for a 20 yard touchdown pass to take a 38-31 lead late.

Now enter Earnest Byner into the discussion. The dude had a monster day. He was the only reason Cleveland even had a chance to tie the game up at the end. Bernie Kosar and the Browns rode his back down the length of the football field to what certainly looked like a tying touchdown and a second straight overtime finish in the AFC Championship game. Then it happened. The leaping Bronco, the deafening cheer of the crowd and the exhausted, beaten man laying at the one yard line. It pains me, in some small way, to know that Byner would be remember for that play and that play alone. Then the fan in my kicks in and I grin at our good fortune. I will say this, I'd take an Earnest Byner on my football team any day. Before I got my "History of the Denver Broncos" DVD a year or two ago, I remembered this game better than "The Drive". Now for some reason, it seems to be a distant memory that I can only hope to catch on NFL Network someday. One of the greatest AFC Championship games every played and what a rivalry these two teams had in the 80's. Never mind that the Broncos would go on to lose another Super Bowl that year, the NFC outclassed us in every way back then. I take comfort in knowing that the Denver Broncos were the class of the AFC in that decade even if it meant heartache after each AFC Title.