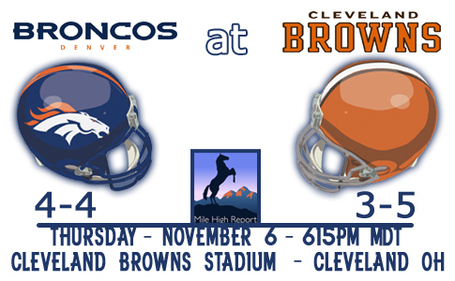 Check Out DawgsByNature for all things Cleveland Browns!

Looking to win their eighth consecutive game against the Browns (3-5), the Denver Broncos (4-4) travel to Cleveland this week for a Thursday night contest televised by NFL Network. Kickoff is set for 8:15 p.m. EST with Bob Papa and Cris Collinsworth calling the action.

Despite a 26-17 loss to Miami last week that marked their third consecutive defeat, the Broncos enter Thursday's game in first place in the AFC West over San Diego (3-5), which hosts Kansas City on Sunday. Denver's game against Cleveland begins a pivotal stretch in which the club plays three of its next four games on the road. Playing on a Thursday for the fourth consecutive year, Denver faces a Cleveland squad that is coming off a 37-27 home loss to Baltimore on Sunday. The Browns are 3-2 in their last five games after beginning the season with an 0-3 record.

Since 1975, the Broncos own an 18-2 (.900) overall record (reg. season and postseason) against the Browns. Denver's seven-game winning streak versus the franchise ties for its fifth longest against an opponent in club history. The Broncos also own a four-game road winning streak against Cleveland that ties for their longest versus any opponent in team annals.

Several rookies have played prominent roles for Denver through the first half of its 2008 season. Ryan Clady (1st Rd., Boise State) has started every game at left tackle and has not surrendered a sack while committing just two penalties. Wide receiver Eddie Royal (2nd Rd., Virginia Tech) leads all NFL rookies in receptions (46-461, 3 TDs), ranks second in the league in punt return average (13.8 yds.) and has a team-high 789 combined yards, including a 95-yard kickoff return.

DENVER 17, at CLEVELAND 7 (Oct. 22, 2006)
With 69 receiving yards on six catches, Broncos WR Rod Smith becomes the franchise's career leader in combined yardage (12,181), passing running back Floyd Little... Denver Head Coach Mike Shanahan overtakes Weeb Ewbank for sole possession of 18th place in NFL history in career victories with his 135th win... Denver ties a franchise record by going 11 consecutive quarters without allowing a touchdown before giving up a fourth-quarter TD pass to the Browns... Broncos DE Elvis Dumervil matches a franchise rookie record with three sacks in the game... Broncos WR Brandon Marshall hauls in the first two receptions of his career, including a 9-yard touchdown grab... Denver's win against Cleveland is its seventh in a row against the franchise.

at DENVER 23, CLEVELAND 20 OT (Dec. 14, 2003)
Denver K Jason Elam sends the game into overtime with a 36-yard field goal with 6 seconds left and wins the game with a 25-yard field goal in the extra period...Cleveland rallies from a 10-0 first quarter deficit against the Broncos and takes a 20-17 lead with 1:11 to play... Broncos RB Clinton Portis (139 yds.) posts his sixth consecutive 100-yard rushing performance... QB Jake Plummer records his first fourth-quarter comeback as a Bronco and throws for 269 yards... Browns WR Dennis Northcutt totals 115 receiving yards while Broncos TE Shannon Sharpe has 97 receiving yards on eight catches... Denver holds Cleveland to 2-of-11 (18.2%) on third downs.

at DENVER 44, CLEVELAND 10 (Oct. 15, 2000)
The Broncos snap a rare two-game home losing streak with a 34- point win against Cleveland that marked the largest margin of victory in the series... Denver QB Brian Griese reaches the 300-yard passing mark by halftime and records his third 300-yard game of the year (336 yds.) while throwing three touchdown passes...Denver's defense posts a score for the second consecutive week with Billy Jenkins returning an interception 36 yards for a touchdown...Denver has a 300-yard passer (Griese, 336), a 100-yardrusher (Mike Anderson, 103) and two 100-yard receivers (Ed McCaffrey, 129, and Rod Smith, 111) in the same game for the second time in club history.

DENVER 29, at CLEVELAND 14 (Nov. 7, 1993)
Denver wins its third consecutive road game against the Browns... Denver RB Reggie Rivers blocks a punt in the end zone for a safety in the second quarter, helping the Broncos take a 16-0 halftime lead... Broncos QB John Elway throws touchdown passes to three different receivers, totaling 244 yards passing... The Broncos convert 8-of-13 (61.5%) of their third-down attempts... Denver holds Cleveland to 266 total yards of offense, including only 75 on the ground.