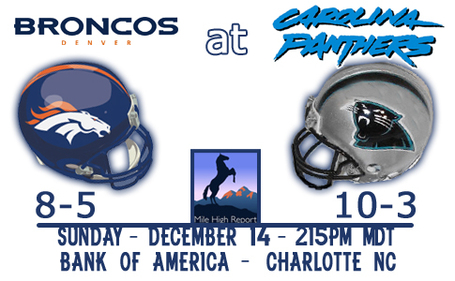 For Everything Panthers Related, Check Out CatScratchReader

Winners of four of their last five games, the Denver Broncos (8-5) put their three-game road winning streak on the line this week when they face the NFC South-leading Carolina Panthers (10-3) on Sunday. Kickoff at Bank of America Stadium is set for 4:15 p.m. EST, and the game will be televised on CBS with Dick Enberg and Randy Cross calling the action.

With three weeks remaining in the regular season, the Broncos hold a three-game lead atop the AFC West over the Chargers (5-8).  Denver, which is one of just two teams (Tennessee) in the NFL to hold sole possession of first place in their division after every game this year, can clinch its 11th all-time division title with a win/tie against the Panthers or a Chargers loss/tie in their road game against Kansas City on Sunday.

The Broncos are coming off a 24-17 win at home against the Chiefs in a game in which they allowed a season-low 260 yards of offense.  Trailing 17-7 in the second quarter, the Broncos converted eight of their next 10 third-down attempts to overcome the deficit en route to posting their AFC-best sixth 400+yard game (425) this season.

Denver faces a Carolina squad that most recently earned a 38-23 home win against Tampa Bay on Monday Night Football that marked its sixth victory in the club's last seven games. The Panthers totaled a franchise-record 299 rushing yards on 37 carries (8.1 avg.) against the Buccaneers, who entered the game ninth in the NFL in run defense.

Owning a 3-0 record against the NFC South this year, the Broncos on Sunday can post only their second 4-0 interconference record in club history with a win against the Panthers. Sunday's game marks Denver's first-ever regular-season road game versus Carolina.

The Broncos visit Charlotte having not surrendered a sack in their last three games, a streak that ties for the longest in franchise annals. Rookie left tackle Ryan Clady (0.5 sacks allowed in 13 starts) and the rest of his offensive linemates have helped Denver lead the NFL in sack percentage per pass play with a 1.6 mark (8-501) that projects to be the second-best season total in NFL history.