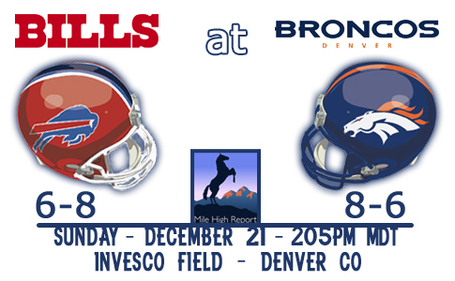 The Denver Broncos (8-6) can clinch their 11th AFC West title and 18th postseason berth with a win on Sunday in their regular season home finale against the Buffalo Bills (6-8). Kickoff at INVESCO Field at Mile High is set for 2:05 p.m. MST, and the game will be televised on CBS with Ian Eagle and Solomon Wilcots calling the action.

Denver saw its three-game road winning streak come to an end last week with a 30-10 loss to NFC South-leading Carolina. The Broncos scored on their first two possessions of the game before the Panthers pulled away, breaking a 10-10 first-quarter tie by scoring the game's final 20 points en route to improving to 11-3 on the season.

Similar to last week, the Broncos enter Week 16 with the ability to clinch their division with a win or tie or a San Diego loss or tie in its game at Tampa Bay, which kicks off at 11 a.m. MST on Sunday. Denver's focus, however, remains solely on a Buffalo squad that is coming off a 31-27 loss to the New York Jets. The Bills, who started the season with a 4-0 record and were 5-1 after their first six games, feature one of the NFL's top special-teams units along with a defense that ranks among the league's top 10 in both third down and red zone efficiency.

Winners of their last five games against the Bills, the Broncos enter Sunday's game with a 6-0 record when posting an even or positive turnover ratio this season. Denver joins Arizona (7-0) and Indianapolis (8-0) as one of three clubs in the league with a perfect record when not losing the turnover battle.

The Broncos' roster is one of the youngest in the league and includes an NFL-high six rookies who have appeared in all 14 games. A total of 12 rookies (8 draft picks, 4 college free agents) have combined to play in 135 games for the club this year, including 50 starts at 10 different positions.

Rookie left tackle Ryan Clady, a 14-game starter who has given up only half a sack, and rookie wide receiver Eddie Royal, who ranks sixth in the league in combined yards (1,623), have been key parts of a Broncos offense that ranks second in the NFL in yards per game (385.4). Quarterback Jay Cutler leads the AFC with 3,851 passing yards and is just 239 yards away from setting a Broncos single-season passing record.

DENVER 15, at BUFFALO 14 (Sept. 7, 2007)
Denver has an individual 300-yard passer (QB Jay Cutler) along with an individual 100-yard rusher (RB Travis Henry) and receiver (WR Javon Walker) in a season opener for only the second time in franchise annals to lead a last-second 15-14 win over Buffalo at Rich Stadium... Cutler (304 yds.) posts the first 300-yard passing game of his career... On the game-winning drive against the Bills, Cutler completes 5-of-6 for 54 yards, including 3-for-3 for 43 yardson third downs... K Jason Elam notches the eighth game-winning walk-off field goal in regulation or overtime of his career with the veteran's 42-yard game winner as the fourth quarter ended... In addition to leading the team with 10 tackles in his first start at middle linebacker, Denver LB D.J. Williams registers a sack... DE Elvis Dumervil has the first interception of his professional career.

at DENVER 28, BUFFALO 23 (Sept. 22, 2002)
The Broncos move to 3-0 on the season, their first such start since 1998, with a 28-23 win against the Bills... Rookie RB Clinton Portis, filling in for an injured Olandis Gary, records the first 100-yard rushing game (18-103, 1 TD) of his career... WR Rod Smith takes over first place in Broncos history for career touchdown receptions with his 46th in the fourth quarter, a score that proved to be the game winner... Four different Denver defenders post sacks.

DENVER 23, at BUFFALO 20 OT (Oct. 26, 1997)
The Broncos secure a hard-earned 23-20 overtime victory in Buffalo after a severe snowstorm in Denver delayed their flight by 10 hours and forced the club to arrive in New York only 12 hours before the 1 p.m. EST kickoff... Denver takes a 20-0 lead late in the third quarter when DT Keith Traylor returns an interception 62 yards for a touchdown...Buffalo sends the game in overtime with 20 unanswered points in the third quarter... In overtime, Denver wins the toss and elects to kick off due to the wind before K Jason Elam wins the game with a 33-yard field goal at 1:56 of the extra period.

at DENVER 22, BUFFALO 7 (Sept. 3, 1995)
The Broncos open the Mike Shanahan era with a 22-7 victory
against the Bills in their season opener... Denver holds Buffalo to only 234 net yards, including just 60 on the ground... Broncos TE Shannon Sharpe ties a career high with 10 receptions and sets a personal best with 180 receiving yards while QB John Elway throws for 317 yards... K Jason Elam connects on 5-of-6 field goal attempts, including a 52-yarder... The Broncos hold Buffalo to 1-of-12 success on third downs.