In fact, the Broncos aren't much different than the Kansas City Chiefs or Cleveland Browns.  The difference is that Denver drafted Jay Cutler.  Jay Cutler is the best young QB in the NFL.  He's better than Big Ben.  For a lot of this season he was better than Peyton Manning.  But he's not there yet. 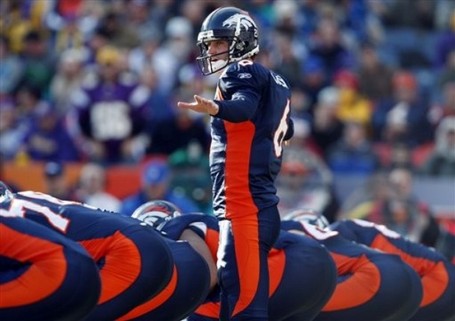 Jay Cutler should be headed to the Playoffs this year.  He deserves it.  Unfortunately for Jay, he happens to play for a team that doesn't deserve to play in the playoffs. Cutler will be (arguably, of course) the best QB in the league some day.  He'll at least be in the conversation.  But he has learning to do.  He'd agree.

Denver has lost its way on defense and doesn't have a single bright spot to take into 2009 other than young depth.  In fact, I think there are more questions now than there were at this time last season. Last season it looked like Elvis Dumervil was a star in the making.  It looked like Denver, at very least, had safeties and corners that were serviceable at worst.  This season? No safeties. Champ is fighting to get through an injury.  Dumervil has not only been a virtual non-factor, but a liability because of his size. 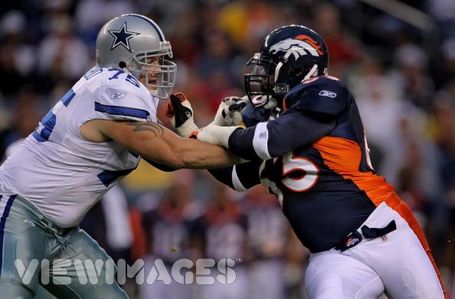 Dewayne Robertson hasn't made anybody forget Keith Traylor.  Marcus Thomas hasn't created enough havoc or made enough plays to have a safe starting spot going into next season.  In my opinion, DJ Williams is Denver's best linebacker, but the defense isn't better with him than it is with Wesley Woodyard.  Why? Our Middle Linebacker slot is still open for discussion.  Niko and Nate didn't earn a passing grade this year, and I'd be shocked if Denver didn't look long at a few linebackers in the draft.  In fact, if Denver loses in week 17, the Broncos will draft in the top 15.  That gives them a great slot for James Laurinaitis (LB), Taylor Mays (S), or my personal favorite, Peria Jerry (DT).  Denver simply needs to strengthen the heart of its Defense.  It's weak in the middle and strong on the perimeter.  That's not going to stop anyone from doing anything.  I truly hope that Mr. Bowlen and Coach Mike can make the right decision on who the leader of the defensive unit will be.  There's something to be said for sticking with Slowick and the level of continuity that would bring, but is that the right thing to do?  I don't have the answers and I can't tell you who Denver likes, doesn't like, or who will even be available to Denver.  Only time will tell.

The second issue is the inability of the Denver Broncos to run the ball with any level of consistency.  Denver looked like a carbon copy of the 2005 and 2006 versions of themselves on Sunday.  Remember how that team could move the ball well, but stalled in the red zone?  Much of that issue is simply that Denver can't get positive yardage in its running game. Denver has had some injury woes at running back, but in the grand scheme of things, they are just woes.  A bigger issue is that the Denver Broncos drank the orange Kool-Aid once again this off season and talked themselves out of a top tier free agent running back.  They put their faith in an oft-injured project from Arizona State who played for 2 quarters this season.

Going into 2009, Denver has a great fullback in Hillis, but no reliable tailback.  Of course Denver brings Torain and Alridge back, but they need a veteran running back that can pick up tough yards and doesn't have neck injury problems to deal with (Pittman).  Does Denver finally bring in a free agent or do they try and pull a running back out of the sky in the late stages of the draft?  It’s anyone's guess.  Does Denver take a flier on Fred Taylor or Sticky-Ickey Ricky Williams? 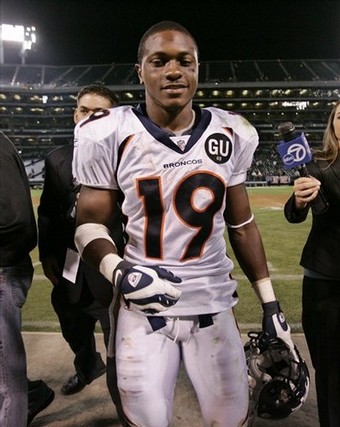 Yes, Denver found a franchise left tackle.  Heck they even found a right tackle.  Their offensive line is back among the strongest units in the league. They found a complimentary player to Brandon Marshall in Eddie Royal.  Denver found some depth at a few defensive positions.  They found out that their offense is one of the best in the NFL as long as they don't have to play a team with a great pass defense.

Those aren't silver linings, those are things that a team trying to build through the draft should be doing.  Denny Green said it best a few years ago, but the Broncos embody the quote "They are who we thought they were". 9-7 or 8-8, the Broncos aren't a top tier team and they aren't at the bottom either.  They're mediocre, but with hope.  They must continue to get impact players from the draft. They're not done rebuilding. Make no mistake, that's what this is. 2008 was Denver's second year in a three year rebuilding project.

They found a lot of things out this year, but the true measure of how good the 2008 Broncos are will not be whether or not they can pull off the virtually impossible win in San Diego next Sunday, but how they take what they learned in 2008 and apply it towards a more successful 2009.

Denver has a chance on Sunday night.  But win or lose, they will still be a fatally flawed team with a huge personnel deficiency on one side of the ball and an inability to physically match up with bigger, stronger teams when it comes to the ground game.  Stand by your team, Broncos faithful.  They'll get there, but you must summon all the patience you can muster because this group of very talented but enigmatic players will absolutely test your patience.