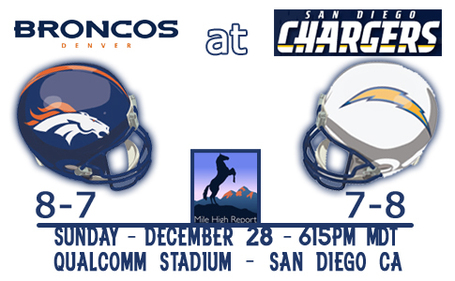 With the AFC West title and a playoff berth at stake, the Denver Broncos (8-7) face the San Diego Chargers (7-8) this week in a nationally televised Sunday Night Football contest at Qualcomm Stadium. Kickoff is set for 5:15 p.m. PST, and the game will be televised on NBC with Al Michaels, John Madden and Andrea Kremer calling the action.

It appeared the Broncos were on their way to clinching the AFC West title last week after they took a 13-0 lead against the Bills in the second quarter, but Buffalo rallied to earn a 30-23 victory.  Denver controlled most phases of the game, registering 532 yards of offense (7.3 per play) and limiting the Bills to just 275 yards and 26:49 of possession. But the Broncos had two turnovers and struggled in the red zone, scoring touchdowns on only two of their six trips inside the 20-yard line.

Despite being forced to place 16 players on season-ending reserve lists due to injuries, including seven running backs, and one of the league's youngest rosters, the Broncos travel to San Diego having held sole possession of first place in the AFC West following every game this year. A victory against the Chargers would make the Broncos just the fifth division winner in the 16-game era (since 1978) to maintain sole possession of first place in its division following every game.

Denver faces a challenge to achieve that distinction against the Chargers, who have won their last three games. San Diego's previous two wins have come on the road, including last week's 41-24 victory against a Buccaneers squad fighting for a playoff berth.

The two clubs' first meeting in Week 2 was one of the NFL's most memorable games this season with the Broncos defeating the Chargers 39-38 at INVESCO Field at Mile High. Following Jay Cutler's 4-yard touchdown pass to Eddie Royal with 24 seconds left, the Broncos became just the third team in NFL history to give up the opportunity for a tie and win a game with a successful two-point conversion when Cutler found Royal again in the end zone.