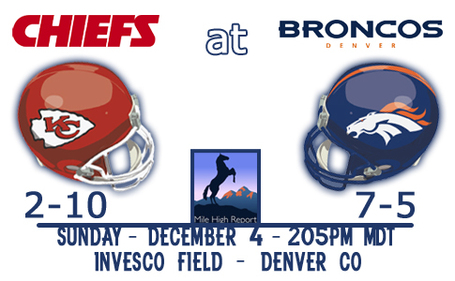 The Denver Broncos (7-5), who lead the AFCWest by three games with four weeks left in the regular season, look to strengthen their playoff chances this week when they host the Kansas City Chiefs (2-10) on Sunday at INVESCO Field at Mile High. Kickoff is set for 2:05 p.m. MST, and the game will be televised on CBS with Bill Macatee and Steve Beuerlein calling the action.

One of just two teams (Tennessee) in the NFL this season to hold sole possession of first place in their division after every week, the Broncos can clinch their 11th AFC West title with a San Diego loss to Oakland on Thursday night and a win against the Chiefs. Denver hosts Kansas City after winning its third consecutive road game on Sunday with a 34-17 victory over the AFC East-leading New York Jets, who entered the game on a five-game winning streak.

Denver faces a Chiefs squad that is coming off a 20-13 win at Oakland that snapped its seven-game losing streak. Both of Kansas City's two wins this year have come against divisional foes-The club also defeated Denver 33-19 at Arrowhead Stadium on Sept. 28. The Chiefs will be looking for their first-ever win at INVESCO Field at Mile High and are 0-7 at the stadium since its first year in 2001.

Sunday's game will feature two of the NFL's youngest teams with both Denver and Kansas City combining to field 19 rookies who have appeared in at least 10 games this season. Kansas City's 10 rookies with at least 10 games played lead the NFL while Denver's nine such rookies rank second in the league.

The Broncos' rookie class features eight draft picks and four college free agents who have combined to play in 115 games with 40 starts this season. At least one rookie has played a key role in all seven of Denver's wins this season, including last week when seventh-round pick Peyton Hillis (Arkansas) became the first player this year to reach 100 rushing yards against the Jets with his 129-yard, one-touchdown effort.

Allowing just eight sacks in 461 pass plays, the Broncos lead the NFL in sack percentage per pass play (1.7) and are on pace to finish the year with the third-best such mark in league annals (lowest in 19 seasons). The club's offensive line has not surrendered a sack in the last two weeks (80 pass plays) and has helped the Broncos rank second in the NFL in yards per game (390.9) and yards per play (6.2).

at KANSAS CITY 33, DENVER 19 (Sept. 28, 2008)
Denver's snaps its two-game winning streak against Kansas City with a 33-19 loss at Arrowhead Stadium... K Matt Prater makes two field goals of at least 50 yards (56 and 51 yds.), becoming the third Bronco in franchise history and first since 2002 (Jason Elam) to accomplish that feat... Broncos rookie WR Eddie Royal has a game-high nine catches for 104 yards (11.6 avg.), tying his own single-game franchise rookie record for catches... With his 16-yard touchdown reception, WR Brandon Marshall finds the end zone in his fourth consecutive regular-season game, the longest such stretch of his career... QB Jay Cutler finishes the game 29-of-49 for 361 yards with the one touchdown, marking his fifth-career 300-yard game and third of the season... DT Kenny Peterson posts a sack in his first career start.

at DENVER 41, KANSAS CITY 7 (Dec. 9, 2007)
Denver sweeps its season series with Kansas City with a 41-7 win at INVESCO Field at Mile High... The Broncos' 169 rushing yards in the first half mark their highest half rushing total since they had 180 rushing yards in the second half against Indianapolis on Oct. 29, 2006... CB Champ Bailey's interception tied him with Steve Atwater for eighth place in team history in career interceptions with 24... The Chiefs post 17 rushes for 16 yards, marking a 0.94 per carry average that was the third lowest ever by a Broncos opponent... Broncos QB Jay Cutler posts a career-best 141.0 rating (20-of-27, 244, 4 TDs) as he throws a personal-best four touchdown passes... WR Brandon Marshall (10-115, 2 TDs) reaches the 1,000-yard receiving mark (1,029) for the first time in his career, giving Denver its 27th such output in club history... RB Selvin Young (17-156) records a career high with 156 rushing yards (second 100-yard game as a professional).

DENVER 27, at KANSAS CITY 11 (Nov. 11, 2007)
The Broncos' victory marks their first win at Arrowhead Stadium since their 37-34 overtime win on Oct. 20, 2002... Denver's win also snaps a nine-game streak in which the home team won in the Broncos-Chiefs series (longest such streak in club history vs. an opponent)... Denver RB Selvin Young records the first 100-yard rushing game of his career with 109 yards on 20 carries (5.5 avg.) with one score, becoming the first Bronco to reach 100 rushing yards at Kansas City since 2002... The Broncos post a +3 turnover ratio and have four takeaways, including a 17-yard fumble return for a touchdown by LB Nate Webster that puts Denver ahead 20-8 early in the third quarter... Broncos K Jason Elam connects on a 50-yard field goal attempt in the second quarter that is the 37th 50+yard field goal of his career... Denver limits Kansas City to no touchdowns in two red zone appearances, 67 yards on 22 rushes (3.0 avg.) and no touchdowns for the afternoon (3 field goals, 1 safety).

at DENVER 9, KANSAS CITY 6 OT (Sept. 17, 2006)
Denver defeats the Chiefs on Jason Elam's 39-yard field goal in overtime... Elam's field goal in overtime is the 20th career game-winning or game-saving field goal of his career... The Broncos trail 6-0 at halftime and 6-3 in the fourth quarter before QB Jake Plummer helps Denver tie the score by engineering a 14-play, 76-yard drive that culminated in an Elam field goal... The Broncos hold Kansas City to no touchdowns in two red zone possessions...Broncos Head Coach Mike Shanahan improves to 11-1 (.917) in home openers as Denver's head coach (1995-Pres.).