Reality Sinks In On Move To Oust Shanahan, Bowlen Made The Right Call

Share All sharing options for: Reality Sinks In On Move To Oust Shanahan, Bowlen Made The Right Call

I always promised myself one thing when I started MileHighReport in August 2006.  I would have an opinion and go with it.  I feel it makes for a better website and better community.  It sparks conversation and debate, which attracts readers and, more importantly, active members.  This move by the Broncos, the firing of Mike Shanahan after a career with the team that spans two decades, put that promise to the ultimate test.  It is a touch subject, one that has everyone's nerves raw and exposed.  A promise is a promise, however, so here goes....

The firing of Mike Shanahan earlier was the right move for Pat Bowlen to make.  It hurts to type those words, hurts more to read them aloud, but in the end it is how I truly feel after getting over the shock.  The funny thing is, I had been pondering this for the past couple days, much like Pat Bowlen must have been pondering the same thing after watching his team get crushed up and down the Qualcomm Stadium turf in what constituted a playoff game. 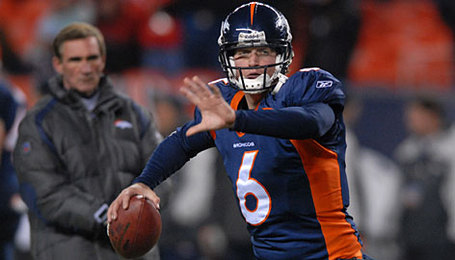 Jay Cutler's development will be overseen by someone new in 2009

That's the problem.  There had been too many of those games over the past 3 years, too many crushing defeats, too many narrow victories.  You are what your record says you are, and over the past 3 seasons, each of which failed to include a post season visit despite 2 seasons in which the Broncos needed only a home victory over a sub-.500 team to qualify, the Broncos were 24-24.  The defense, in both talent and performance, had dropped to historically bad levels.  Shanahan held the key to that, and in a League where talent is, well, almost everything, the Broncos just didn't have enough.  Shanny is on the hook for that as well.

This is not a bash-Shanny post.  Far from it.  'The Mastermind' will likely find his way to the Ring of Honor, deservedly so, and most likely on to Canton.  I will cheer for his success, except when his team plays the Broncos, of course.  End up in the AFC West and that could get dicey.  I am a fan of Mike Shanahan but my heart bleeds Orange and Blue.  It was that way before Mike Shanahan and it will be that way long after.

There is going to be plenty of debate, sometimes heated, on this site in the days and weeks to come.  Try and remember that we all want the same thing.  Understand that while 2+2=4, so does 3+1.  There are multiple ways to get to the same destination.

The Denver Broncos won't find a Head Coach that is better or equal to Mike Shanahan.  Even Bill Cowher fails to live up to the Xs and Os superiority of Shanny.  he has gotten more production with less that any coach out there.  Too bad he only has himself to blame for that lack of talent.

No, the Broncos will take a step backward in terms of coaching.  The hope of Pat Bowlen and company is that the combination of a new personnel department, along with a breath of fresh air in the headset will make up the difference.  If the Broncos play their cards right they can make it happen.  With 9 draft picks and a sizable chunk of cap space the Broncos definitely have the cards.

Only time will tell.  Like you I will wait and see what the Broncos decide to do, which direction they decide to go and will react to any and all news along the way.  Until then, Thank You Mike Shanahan for bringing success and legitimacy to the Denver Broncos.  In many ways it was the roots of your early success that would end up leading to your demise.  Such is the way of life in the sports world.  Coaches are hired to be fired.  A few lucky ones just get to put it off a little longer.

For Mike Shanahan, time ran out.