Share All sharing options for: Seven Days of Clady--Day #3

The final countdown to the end of the ProBowl voting has begun, and that means you only have 5 days left to make your vote count!  Dec 9th at Noon EST is the deadline, and time is flying.

On the Third day of Clady... 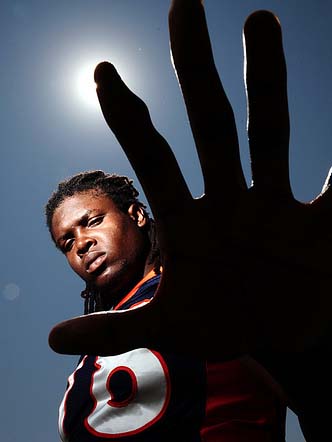 So are we talking about Ryan Clady?  Nope.  That list of achievements belongs to 2007 Pro Bowl alternate Joe Thomas.

Like Thomas, Clady has been nothing but the consumate professional since his arrival in Denver.  Within minutes of drafting him, Shanahan announced that Clady would be the starting LT.  Clady hasn't let him down, starting in every game of his rookie campaign.  And while the Browns would finish the year tied for third in sacks allowed with a total of 19, Denver is currently tied for 1st with only 8 sacks allowed.

Clady's half sack allowed so far edges him around Thomas, but Clady's game has also been nearly devoid of mental errors as well.  Clady's 3 penalties (illegal formation, holding, false start) are among the fewest for an offensive tackle in the league, and more than twice as good as Thomas' 7 penalties posted in 2007, including a set of back-to-back false starts which ended a Browns drive and cost them a game late during their failed hunt for the 2007 playoffs.

Joe Thomas found his way into the ProBowl in 2007.  Clady deserves as much, if not more, consideration.