Share All sharing options for: Seven Days of Clady--Day #4

The final countdown to the end of the ProBowl votinghas begun, and that means you only have 4 days left to make your vote count!  Dec 9th at Noon EST is the deadline, and time is flying.

On the Fourth day of Clady... 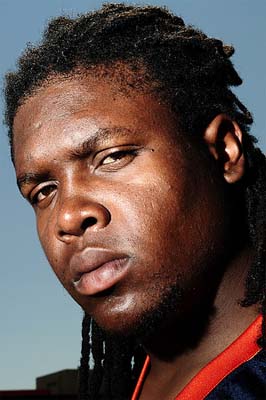 What do you have to do to get to the Pro Bowl?

In 2007 Matt Light checked in with 5 penalties and 6.5 sacks, while Jason Peters was right behind him with a whopping 8 penalties costing over 60 yard of offense, and 6.5 sacks given up.  Light anchored a line that, though superbowl bound, gave up 21 sacks, approximately 1 sack every 28 plays.  Buffalo on the other hand allowed 26 total sacks, an average of 1 sack every 17 plays.

In the years previous to 2007, perrenial probowlers Willie Anderson and Johnathon Ogden had been stalwarts, with one or both appearing in this decades probowls.  However, in all of those appearances, Anderson averaged 4 penalties and 3.5 sacks, while anchoring lines in Cincinnatti that would allow everywhere from 1 sack per 14 plays to 1 sack per 26 plays.

Ogden on the other hand put up some stellar seasons during his runs, including his final Pro Bowl appearance after the 2006 season, where he allowed the fewest sacks of any lineman in the league (1) and had the fewest penalties (3).

Compare this consistent probowlers best performance with Clady's first performance to date:  half a sack allowed and 3 penalties.  Ogdens line allowed barely one sack per 31 attempts, while Clady has anchored one fo the finest lines in football, allowing one sack per 57 attempts, nearly twice as good as any line in the past decade.  The similarities are striking, and there can be no doubt that Clady is a part of a resurgence of dominant offensive tackle play in the NFL, the likes of which haven't been seen since Willie Anderson and Johnathon Ogden were dominating defensive linemen year in and year out.

We can only hope that this is the begining of just such a run of authority by the supremely talented lad out of Boise State.