Share All sharing options for: Seven Days of Clady--Day #5

The final countdown to the end of the ProBowl voting is almost over, and that means you only have 3 days left to make your vote count!  Dec 9th at Noon EST is the deadline, and time is flying.

On the Fifth day of Clady... 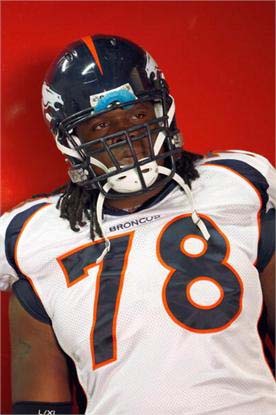 What really matters will be the top five vote getters, as there won't be much movement beyond those five once the fan voting ends.  Two starters will get named out of, most likely, those five, and one reserve will be named, but there is still the possibility for either the fourth or fifth place finisher to get called up in the event of injury.

Jake Long is in the lead as of the 2nd of December, with 160,931 votes.  Behind him is D'brickashaw Ferguson of the Jets, Matt Light of the Pats, Jason Peters of the Bills and Michael Roos of the Titans.  The magic number from Clady will be somewhere between 70,000 and 100,000 votes, in order for him to be among the top 5 after fan voting concludes.  Everything over that should be gravy.

If these guys are Clady's top competition for ProBowl votes, what do they have that he doesn't?  The answer:  Not much.

Really?  I mean, really?  This folks, is the epitome of name recognition.  A position like tackle may never be subject to the ballot stuffing that the Redskins fans so feverishly engaged in, as some NFL fans don't even know who their own tackles are.  A lot of voters get to the Tackle section of the ballot, and scan for names they recognize.  And while a player like Champ may not be deserving in a year when he has been injured and missed significant time, we can at least still acknowledge that he is tops in the game when healthy, and that his domination at his position has earned him some name recognition votes.  But Matt Light?  he was an iffy choice last year, during a time when there wasn't a lot of standout play at tackle through the whole league.  This year it sounds like a painful joke.

Forget for a second that the Patriots have allowed their QB to take a shellacing this year, allowing 40 sacks, an average of one every ten plays (compared to once in every 65 plays for Denver), and put aside that nagging notion that perhaps an oline struggling as badly as the Patriots have been is not the best place to be looking for probowlers, and lets just look at Light himself:  6.5 sacks allowed.  Do we need to linger here?  Even if Clady doesn't make it, there are still other tackles more deserving.

Which brings us to Jason Peters.  Besides both having given up 6.5 sacks, Light and Peters have something else in common:  they were both voted to the Pro Bowl last year (Peters was a definitely a deserving candidate in 2007).  Name recognition rears its ugly head.  Add in Peters 8 penalties for over 100 yards this year, and I think we can be forgiven for not considering the merits of these two for this Pro Bowl.

More competition after the jump...

Tennessee has had a thoroughly effective offensive line this year, and the only performance that I think is comparable with Clady is that of Roos.  his ZERO sacks allowed leads the league among tackles and with only two penalties, and only false starts at that, says that NO ONE is beating this guy.  If I didn't have my time dedicated to voting for Clady (and in acknowledgement of AZDynamic's advice that to vote other than Clad is to vote against him) I would be voting for Roos.

Ferguson is an interesting addition to the highest votegetters, in that it seems to be only partly name recognition.  He's been around for a little while, and he has been good.  The Jets are playing well, but are kind of meh in certain areas, like sacks allowed (23 for 1 per 17 plays) and ranking in the middle of the pack in rushing statistics (though they have an excellent back in Thomas Jones).  Nothing spectacular.  But Brett Favre changes the whole situation.  Where he goes, players get noticed.  Favre has always had a halo of media attention about him, and Ferguson in 2nd place in pro bowl voting seems to be a correlation of that.  Add in Ferguson's own name recognition and I think a very common formula once again rears its head.

I have saved the best for last, both in terms of talent and discussion.  First let me clarify, that this analysis in no way is meant to disparage Long's talent or argue that Long does not belong in the Pro Bowl.  As the leader in current votes, I intend only to compare him to Clady, and indicate why Clady deserves a lot of votes himself.

The rule of thumb for those who have critically analyzed Jake and Ryan, is that Long is a better run blocker and Clady is a better pass blocker.  That is fine.  You won't get an argument from me about that.  But beneath that generalization are some surprising pieces of information that make us look at both players a little differently.

2.5 sacks.  That is what the stat sheets say.  Ask a (reasonable) Dolphin fan how many sacks Long has given up, and he will tell you 1.5 (or even 1).  They all point to the same play, early in the year (first game I believe) where Long had his guy under control, and Pennington spun the wrong way and into the waiting arms of the defender.  I'll let them have that, if they are 100% confident they want it.  While a case could be made that it was the pressure that Long allowed on the play that got Pennington scrambling, I can understand where fin fans are coming from.  We make the same case for Clady's half sack, i.e., that it is bogus.  My point is that not all sacks are created equal, and that when only two sacks separate you, it is a stat that should not be held in the highest esteem.  5 sacks or 6?  Sure, now we are talking a serious difference in talent.  But 2, 1, .5?  That is a thin line for a stat that is difficult to assign and record sometimes.  Long is actually a standout pass blocker as well, though he does have trouble with speedy edge rushers (like most LTs in the NFL).  Clady may have the fastest kick-step (the move used to neutralize fast pass rushers) in the NFL right now, so there is still some merit to the generalization, so far.

But more surprising than that is what crops up when we compare the two in the running game, and what they mean to their teams respective running attacks.

Adjusted Line Yardage  is a terrific stat from football outsiders for evaluating running games.  I won't go into the math, but the purpose of the stat is to separate the RB from the oline, statistically, grading how much of a run is due to RB prowress and to the work done by the oline.

It is no surprise that a team like the dolphins with two VERY good starting backs in Ricky Williams and Ronnie Brown (and Brown is of the Elite caliber) and a solid backup in Cobb, as well as a predelicition for funky plays (re: wildcat) out of which to run the ball, has at best an average Adjusted Line Yardage (ALY).  At 16th overall they rate at exactly Average. This means that the oline is average, not the running game, and that if the running game appears to be excellent, the RBs should be getting a lot of credit, and deservedly so.

It is also no surprise (to us) that Denver ranks highly in this statistic, as we are on our fifth tailback of the year.  In fact, we rank #1 overall.  Our running game is more dependent on the skills of our oline than any running game in the league.

Where it get really interesting is to look at the distribution and succes of runs.  In Denver, we know that Clady can clear some roads.  Hillis' TD run vs. the Falcons featured Clady the Human Bulldozer.  It is cool, but not terribly surprising to know that denver ranks first and second in the league respectively, to runs on the left and right side of Clady.  This is, after all the nature of the cutback run.  The result of this is that Denver has favored Clady's side in the rushing game, nearly doubling the league average for runs off LT and between LG and LT.  (for fun, They are also #1 running behind Harris and Graham on the RS).

In contrast, Jake Long, who is generally considered the superior run blocker, is not favored by the Dolphins in their rushing attack.  In fact, in a  league that prefers to run strongside by a large margin (which is usually the right side of the oline), the Dolphins prefer the right side slightly more than most.  Why would they shun their #1 rookie's side of the field?

Part of it has to do with the play of their right guard, J.Smiley.  Smiley ranks in the bottom third of linemen in adjusted line yards, and beside him, Jake Long checks in with a merely average 15th.  Contrasted with the opposite side of the line, where teh Fins rate 3rd and 7th in the league, it is not odd to see them favor the side of the field opposite of Jake Long.  he has been put in a position to succeed with the Dolphins, and in no way has he not lived up to his #1 pick status.  So what does that say about Clady?  The coaches around the league have indicated that it says a lot.  And the opponents he has faced have been quick to praise him.

Again, name recognition seems to have played a role in how the chips have fallen so far.  By far the most widely talked about player leading up the NFL draft (followed by McFadden), Long came from a bigtime college program (Michigan) where he had a ton of success.  Clady on the other hand came from a mountain school that was lucky to lure any bigtime schools into a match--and NEVER on their own turf in Idaho--and he was ranked highly only by insiders and scouts.  No talking head wanted to waste their time on him until it was obvious that he was at the top of the board to stay. One need look no further than the fact that perhaps the top talent at OT in the draft lasted until pick 12, where another mountain town, scouting its own backyard was more than happy to see him and nab him up, as proof that Clady was considered an unknown.

Ok.  Worked out fine for us.  Now lets change that, and make him known.  His name on a Pro Bowl jersey will be hard to ignore.