Share All sharing options for: Seven Days of Clady--Day #6

The final countdown to the end of the ProBowl voting is nearly over, and that means you only have 2 days left to make your vote count!  Dec 9th at Noon EST is the deadline, and time is flying.

On the Sixth day of Clady... 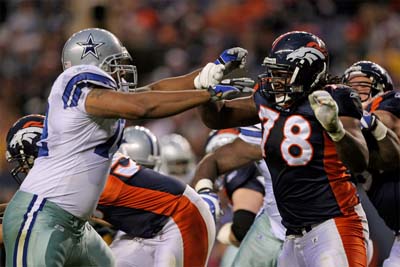 Clady and Denver's offensive line are walking the line of all time greatness:

These are the all time greats.  The '70, '75 and '66 teams above accomplished their numbers in only 14 games, so bear that in mind.  The Broncos line is in heck of good company.  The 'Fins numbers above appear nearly untouchable, but some solace can be had by remembering the fumble/sack/thingy from our SD game earlier this year.  Factor that in, as a rules based anomaly (no team in the above list had anything similar), and our sack per attempts jumps to 1/70!

Right now, the Broncos are on pace for a 606 attempt season, and if we can keep up our current pace of only allowing 2 sacks per quarter of the season, that would put them in the neighborhood of 1/61 sack per attempts, 2nd all time!

And I wouldn't be surprised one bit, if we do even better than that.