Seven Days of Clady! This Is It!

Share All sharing options for: Seven Days of Clady! This Is It!

This is it!  All the voting comes down today in an effort to get our guy onto the list of starters!  Noon today is the deadline, and time is flying.

Make one last trip to the ballots and give it everything you got!

On the Seventh day of Clady... 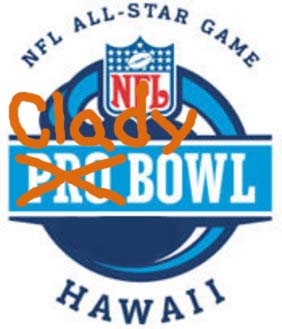 We are closing in on H-Hour C-Day, so crack those knuckles get all the lint and hair out off your optical mouse's eye and get ready to start clicking!

The appeal that I have saved for last is what I figure to be the most important:  voting Clady to the Pro Bowl will be felt by more people than just Clady.  To wit:

The oline coaching staff, including Rick Dennison.  These guys have done an unbelievable job getting our guys ready to play, and they have turned a likely weakness into the greatest strength of this team.  A unit where more than half of the line represents less than 20% of the total experience, this group had as much right as anyone to make youthful mistakes and be inconsistent, and they haven't indulged.  Thank you coaches.  This ones for you.

Shanahan and the personnell office, especially Jim Goodman.  I don't think Mr. Goodman had to show Shanny much tape to convince him that Clady was the guy, but he still deserves a lot of credit for not overlooking a smallschool prospect with underrrated talent.  And Shanny probably had to bite his knuckles a few times when thinking about some of the early RBs that would be available, and settle on cementing LT for years to com.  Thank you personnell guys.  This one is for you.

The bruised and battered running back corp.  Any one of the 7 backs who have had a chance to tote the rock could have let this line down, and every one of them refused.  They have all stepped up and taken advantage of the hard work that our oline unit has put in to even the playing field despite our setbacks.  They honor the work of our oline when they play the way they have.  Thank you Legion of the Damned.  This one is for you.

Lastly, most importantly, the entire Oline, Ben Hamilton, Casey Weigmann, Chris Kuper, and Ryan Harris.  The oline, especially in Denver, works as a unit, and none of these guys is any less deserving of the honor of their peers than Clady is.  As they have gone, so has he.  He has played well feeding the entire line, but he feeds off of them and relies on them too, so it would be remiss of us not to honor them.  That is what this vote can do.  Clady can represent the entire oline in the person of a talented, respectful, professional, intelligent and hardworking individual.  Thank you Broncos oline.

This one is for you.