Share All sharing options for: Football University - The '08 Defensive System(?) 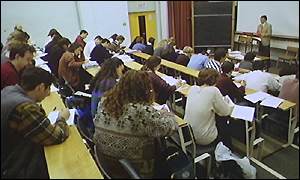 Welcome to another installment of Football University. Today we have a difficult task, but one that many people wanted in a recent poll at MHR. Today we are going to cover the likely system that will employed by the Denver Broncos in '08.

The obvious difficulty is that we don't really know what defensive coordinator Bob Slowik will do. He has a history (albeit lackluster) in running defenses, but hasn't established himself into a set pattern. He ran the Bears defense from '93 to '98, the new Browns expansion team in '99, the Packers in '04, and the Broncos in '07 (though not really in charge that year because the assistant head coach, Jim Bates, ran the defense).

In my mind there are three reasons for Slowik's promotion.

Slowik, then the DBs' coach, talking to Denver's elites

Given Slowik's reputation for aggressive defenses, and given the Denver schemes over the years before Bates departure, I have come up with two reasonable possibilities for schemes. One is the "Show Blitz" most noticeably used by Coyer. The other is the "zone blitz" system. Both systems as run by Slowik have had a strong safety in the box.

Slowik may go with the Show system because of the speed on the team and the recent familiarity of the system with Denver players. Given the youth, depth, and speed at DE Slowik may also opt to use the Zone Blitz system because the DEs are capable of dropping back into coverage while the OLBs blitz in.

I can't really predict what Slowik will do. He has familiarity with both systems, and arguments could be made either way. But I'm going to address the Zone Blitz system for a few reasons.

What is the Zone Blitz system?

The zone blitz system is a scheme predicated on aggressiveness and deception. On most plays there will be one or two LBs blitzing, and these will almost always be OLBs. On a good number of plays the DEs will not join in the pass rush, instead dropping back into zone coverage. This causes the OL to lose a second in determining who to pass block. When effective, OTs are caught off guard trying to block a non-rushing DE while the OLB gets the jump on the outside.

There are multiple advantages and disadvantages of the system.

For the remainder of the column I'm going to explore each of these advantages and disadvantages so that you can make up your own mind about what you think of this system.

The first advantage of the system is that the defense gets a lot of hurry-ups against the QB. While many fans love sacks, most coaches prefer hurry-ups. A "hurry" gives the QB the chance to throw an interception. But because the LBs are often running down a QB (while the OTs are out of position), there is often a better chance of a sack at any rate.

Because of the constant pressure on the outside, effective receiving TEs are often taken out of their game. This is terrific in the AFC West. TEs like Gates and Gonzales have to tone down their strength of going out for a pass, since their absence on the line of scrimmage gives the Zone Blitz a higher chance of success.

One danger of blitzing is that defensive players overshoot the run. The nice feature of the Zone Blitz is that the DEs drop back, or back and out to account for the run. Also (as run in Denver's past) a strong safety is often brought into the box for added protection. It is also difficult for runners to run the middle with the DTs, a MLB, a SS, and two nearby DEs for run protection.

There are also multiple combinations of plays that can be run out of this system. The coach can make the system as specialized or as complex as his team is fit for. The SS can be used in multiple roles, the DTs can change their gap assignments, the DEs can zone or hit any gap they want, the MLB can make a surprise blitz, etc. The team isn't beholden to the base play shown in the above diagram. Any assumptions being made by the other team gets an adjustment in real time. The offensive coordinator is constantly having to guess instead of plan.

Clearly, the biggest disadvantage of the system is the gamble of taking players out of their best roles and placing them in foreign territory. DEs aren't raised to play zone coverage. And while LBs love to blitz, the team as a whole loses a lot of the man and zone coverages a LB brings to the game. In Denver's case, where two speedy OLBs didn't have a great year in '07 this may not matter. They may be better used as blitzers.

Because players are purposefully taken out of position, and because a strong safety is in the box, the system is high risk, high reward. More often than not the system is effective in limiting both runs and passes. Even in the midfield range the QB is not only facing two DEs "trying" to play a zone, but an experienced MLB and a strong safety. But the deep play faces only a free safety in support of one or both CBs, and an effective wide run play that can beat a DE near the sideline can go for a long play.

So is it a good system or a bad one? Like all systems at the pro level, it depends on the execution of the system, the personnel in the system, and the opposing team's execution. I don't like the system overall because I am a more cautious coach (preferring systems that use bend don't break). But that's only a personal view. Factually the system is a great fit for the AFC West because of the pressure exerted to keep elite TEs at the line of scrimmage, and because of the speed of both our OLBs and DEs. While I have advocated Lynch's retirement, he would be a great fit for this system if he has one more year of gas in his tank.

Fire away with any questions or comments you may have!