When Bronco fans today are asked who the most famous Bronco ever to don the #87 jersey, most would blurt out "Eddie Mac!" before giving anything more than half a thought.

We all love Eddie Mac and he was a great player for us, but he never had the NFL write a special rule just for him in order to protect the lives of other players.  That rule was written because of the exploits of Rich "Tombstone" Jackson.

The special rule I am referring to is the "Head Slap" rule, which was instituted in 1977 by the NFL in large part because of Rich Jackson and others after him, such as Deacon Jones.  His patented head slap moves, like the "halo spinner", earned Jackson a reputation as one of the toughest defensive linemen in football.  His head slaps were so powerful, he even broke the helmet of an offensive lineman for the Green Bay Packers.

Before all that, we need to take a trip to Oakland and visit with Crazy Al.  Now we all know Crazy Al likes to jerk people around and he was no different in the summer of 1967.  Rich Jackson had spent a couple of years trying to make it onto the raider(this one's for all you lowercase junkies) squad as a linebacker and then Crazy Al decided to jerk him around yet again and traded him to the Broncos.

Jackson arrived in Denver tired, but determined to make the team.  Lou Saban sent Bronco great Lionel Taylor and another player to the Raiders in exchange for Rich Jackson and two other players.  Lionel Taylor faded into NFL history after that trade, but Rich Jackson switched from linebacker to defensive end and quickly earned the nickname "Tombstone".

Tombstone's career was cut short in the mid 1970's to a severe knee injury, but he finished his career with 43 sacks.  31 of which came during a three year period(68-70) in which he absolutely dominated the NFL.

He tallied 10 sacks in 1968, 11 in 1969 while making All-NFL.  He then became the first Bronco ever to start in the Pro Bowl in 1970 after another 10 sack season.  He made the Pro Bowl again in 1971 despite suffering a season/career ending knee injury after just seven games.  He retired the following season having compiled 43 sacks in just four and half seasons of starting.  That is quite impressive even by today's standards.

There is no doubt in my mind that if Tombstone hadn't suffered that career ending injury in '71 he would have become a first ballot hall of famer.  Of course, he played for the Broncos so maybe he wouldn't have been a first ballot.  Surely he would have gotten in before Elway!  In any case, his impact on that team helped lay the groundwork for what was to become known as the Orange Crush defense.

Rich "Tombstone" Jackson went on to be a school administrator in his hometown of New Orleans.  I am one to bet that the particular school he works at is full of well mannered and well behaved students, where even the "dumb" ones know better than to push his buttons! 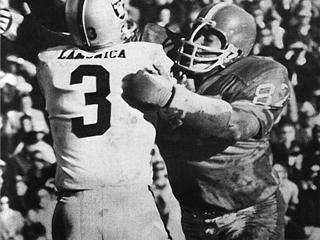