The Goose was and still is the greatest defensive back to ever play for the Denver Broncos.  Champ Bailey may one day break Austin Gonsoulin's many Bronco records, but until that happens he will have to play second fiddle to the great Goose.

Gonsoulin played just eight seasons, yet his play during his short career earned him the unique honor of being one of the four original Ring of Fame members in 1984.  I consider him to be among the forgotten Broncos that deserve to be in the hall of fame, but has been snubbed thus far by those who hold the power of selection. 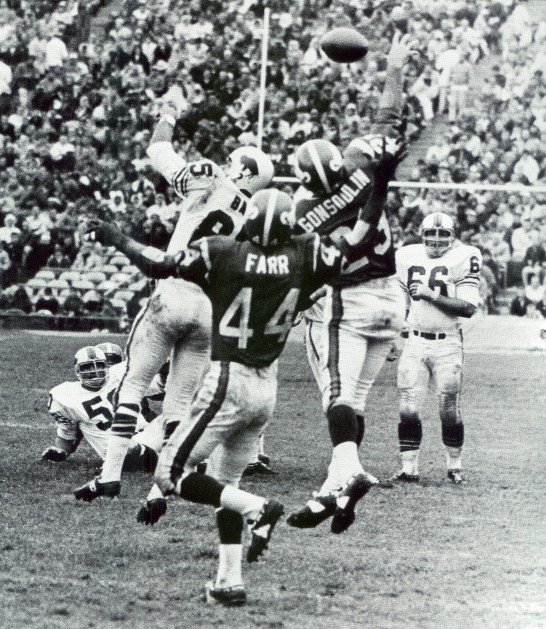 Gonsoulin was born in Port Arthur, Texas where he played running back and defensive back in high school while also starring in track.  He was chosen to All-District and All-State in his senior year before heading to Baylor where he added receiver to his list of playing positions.

This versatility made him a complete player when the Denver Broncos brought him in to play defensive back prior to the 1960 inaugural season.

His rookie season was by far his best year as he logged eleven interceptions which is the longest standing record in the Broncos record book.  He also notched four interceptions against the Buffalo Bills early in the season on September 18, 1960 which is another record that still stands to this day.

I know we all love and admire Champ Bailey as one of the all-time great defensive backs, but he has yet to catch the Goose and until that happens, Gonsoulin is the greatest defensive back in Bronco history.  We know how well he played in his rookie season, but what about his career marks?

Gonsoulin's career mark of forty-three interceptions stood as a record until 1987 when Steve Foley notched his forty-fourth as a Bronco.

That really isn't the whole story.  The Goose retired in 1967 holding the AFL Record for the most career interceptions.  Jim Norton of Houston needed one more year to get his forty-five, while Dave Grayson from Oakland needed ten seasons to reach forty-seven.  If Gonsoulin had played nine seasons he would probably own the AFL record easily.

The Goose was a five time Pro Bowl selection and two time All-AFL selection.  He is also a member of the AFL Hall of Fame.  After he retired, Austin Gonsoulin went on to operate a construction company in his home state of Texas.  He is married and has two children.

So next time you cheer on a big Champ Bailey interception, remember Austin "Goose" Gonsoulin.   One day Bailey's name and number may sit adjacent to the Goose's name and number on the vaunted Ring of Fame at Mile High Stadium.