Share All sharing options for: 2008 Denver Broncos -- Breaking Down the Roster #7 - RunningÂ Back

Can Selvin Young be "The Man"? That is the big question surrounding the Running Back position. The Broncos had the opportunity to draft a talented running back early in the draft and chose not to, instead allowing Young to come in and be the guy. Yea, I know, Travis Henry was still on the roster, but do you really, really think Shanny had any kind of faith in Henry? Me neither. The questions that hover around Young have been there since his days at Texas - durability.

The leading rusher for the Broncos the previous 8 seasons, before 2007, averaged 256 carries per season. Young had 140 carries last year, and had 365 in college, total, over 5 seasons at Texas. His season high as a Longhorn was 137 his Senior season. If Young is going to be the man, and do what the 8 players did before him, he'll have to carry the ball over 100 times more than he has ever done.

The 256 carries per year average out to 16 carries per game. In 15 games last season, Young averaged 9.3 carries per game. Young will have to nearly double his production per game. I say this because I am a believer that the Broncos need to have a horse, pun intended, carrying the ball game in, game out. It benefits the quarterback and the offensive line to know the style of the guy running behind them. Even the Wide Receivers get used to how long they need to block down field. Having a "variety" in the backfield disrupts the flow of the offense.

I think Young can be the man. I just can't say it with certainty because I haven't seen it from Young at any level. No of us have. He'll get the first shot this year, and the Broncos success is largely dependent on Selvin Young doing things he never has before. 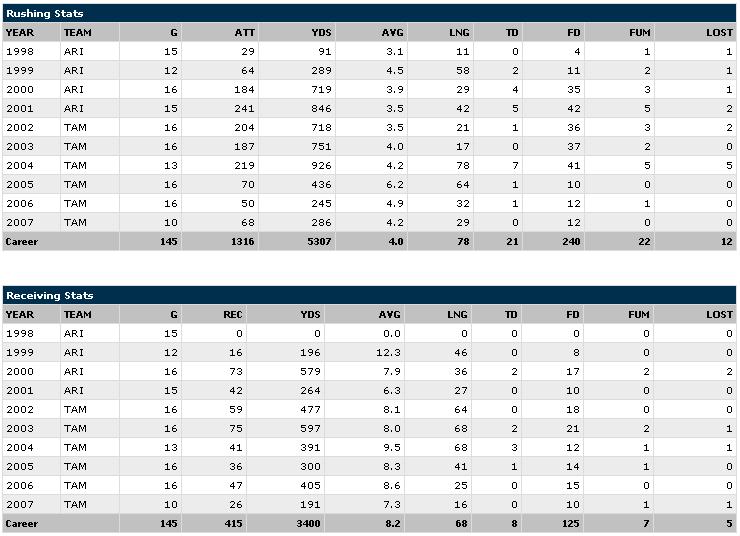 The Broncos brought Michael Pittman in to add some veteran leadership to a running back corps and ballclub that really doesn't have alot of it. When it was becoming apparent to the Broncos that Travis Henry was going to become a bust they signed Pittman, and while he shouldn't be considered the feature back, he does provide the intangibles most successful teams need and possess. Pittman has never rushed for over 1000 yards in a season, or caught 100 passes, but each season Pittman totals 700-1500 yards in combined offense. Raiders fans remember Pittman's performace in Super Bowl XXXVII and he provides the Broncos the type of toughness the team needs.

The Broncos aren't completely convinced that Selvin Young will be able to get it done in the Red Zone or in short yardage situations. Wisely the team went out and grabbed a tough, hard-nosed back that will do what ever it takes to get an inch, a foot, a yard or 5, whatever is needed to move the chains. I like the pickup and this Pittman will be a big help to both Young and rookie Ryan Torain, who is the same type of runner Pittman was early in his career.

If the Broncos can use Pittman the way he should be used at this stage, keep him fresh, and get him into some space in the passing game, Pittman can be an asset. Solid move by the Broncos. 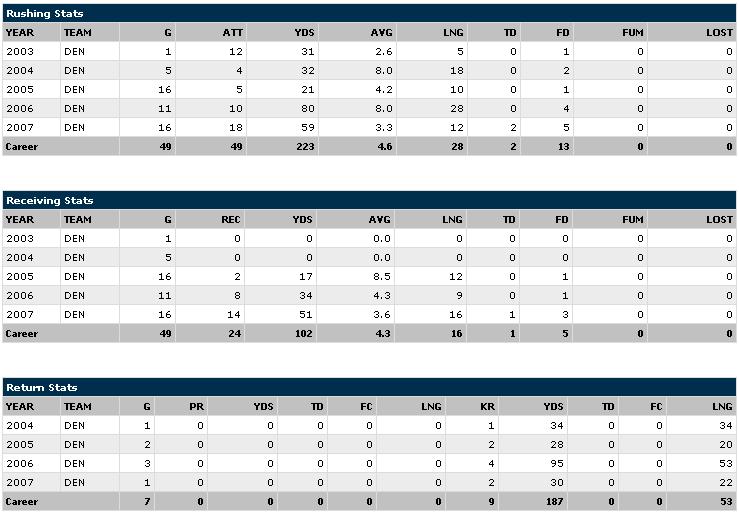 Cecil Sapp has done just about everything during his tim with the Broncos. Playing mostly FB and on special teams, Sapp has been on and off the roster, active and inactive since joining the Broncos as an undrafted FA in 2003. To me, Sapp is the expendable piece of the running back corps, and if Peyton Hillis and Ryan Torain stay healthy and play as well as they have looked thus far, Sapp will most likely be a cap casuality. Playing on a 1 year deal doesn't help Sapp either.

Every team in the NFL has guys like Sapp on their team and they provide value as the first guy called when depth at a position becomes a problem. After 5 seasons as a Bronco, the time has come to upgrade and the Broncos think they have done it.

It seems we have been waiting forever for Andre Hall to make an impact on the field. Bad timing and injuries always seem to derail Hall and this could be his last shot at becoming a contributor as a Bronco. What we have seen from Hall has been promising, both as a return guy and a running back. In limited action, Hall did average 5 yards a carry and 25 yards a kick return. Coming in to 2008, Hall has alot of competition for both those jobs. An injury, or lackluster play could mean the end of Hall's days in Dove Valley.

A lot of fans have been high on Hall. The time has come for Hall to put up or he could find himself out of a job.

Two rookies will have 100% of my attention when I visit Training Camp later this week and Peyton Hillis is one of them. Just take a look at the numbers Hillis was able to put up, and this in on a team that included Darren McFadden and Felix Jones at running back. Hillis still available late in the 7th round was an absolute STEAL!

Hillis is another player the Broncos added to the roster that plays with a bit of a mean streak. While a knock on Hillis is his ability to block inside, he won't have to do much of that in the Broncos zone-blocking scheme. He's a perfect fit in the West Coast scheme the Broncos employ, and his ability to run and catch the football should add a dimension to the offense the team hasn't had since Howard Griffith was getting it done in the late 90's. There is some injury concern in Hillis' past, which likely affected his draft stock, but he appears to healthy and 100% ready to go.

Hillis will have to beat out Cecil Sapp and/or Michael Pittman for the starting FB job, and I think he'll do it. Even if he doesn't, Hillis will be a solid addition to the coverage teams and will provide alot more value than the average, every day 7th Round pick. I have been critical of many Broncos' draft picks over the last decade or so, this one could make up for at least some of them. I am a big fan of Hillis and look forward to watching him on Sundays.

2007 College Notes: Hillis played 13 games (9 starts) as a senior at Arkansas, rushing 62 times for 347 yards (5.6 avg.) with two touchdowns and leading the Razorbacks in both receptions (49) and receiving yards (537) while adding five receiving scores... 49 catches and 537 receiving yards both marked school single-season records for running backs... Finished with 886 all-purpose yards and blocked for Heisman Trophy runner-up Darren McFadden, who ranked fourth in the nation in rushing (140.8 ypg. / 1,830 yds.)... Also blocked for another 1,000-yard rusher in Felix Jones (1,162 yds.) and helped Arkansas rank fourth in the nation in rushing (286.5 ypg.)... Received the 2007 Paul Eells Award for the Arkansas player who showed outstanding character through adversity.


The Broncos hope they got another steal in Torain, who after 2 years as a JUCO running back came into the PAC-10 and took the conference by storm. Torain is the classic 1-cut runner the Broncos prefer and word out of Camp is that Torain has looked great.

Coming off a serious foot injury that limited Torain to only 6 games in 2007, I would prefer to see the Broncos tread lightly with Torain to avoid any type of setback. If healthy, Torain could see quite a bit of action for the Broncos with the running back situation in Denver fluid at best. Torain is a name to keep in mind this season and if healthy could make a huge impact. Selvin Young needs to keep up the pace, cuz the Torain Train is coming!

2007 College Notes: Torain averaged 92.2 rushing yards per game as a senior for Arizona State, totaling 553 rushing yards on 110 carries (5.0 avg.) with five touchdowns in six games (6 starts) before missing the final seven contests due to a fractured toe... Also caught seven passes for 100 yards (14.3 avg.) with two touchdowns to total 653 all-purpose yards... Posted at least 90 rushing yards in five of his six games, including three 100-yard efforts... Ran for a season-high 123 yards and had three rushing scores in the season opener vs. San Jose State (9/1).

Perhaps the most intriguing player in Training Camp, Alridge had a huge 2007 season. Is he a 1-hit wonder or does the udner-sized, ultra fast running back have what it takes to make it in the NFL? That is the question Alridge and the Broncos are trying to answer at training camp. To me, you can never have enough pure speed on the football field.

Alridge certainly is rough around the edges, and will likely be practice squad material in 2008. Look into the future, howevere, and Alridge could be an asset in the return game later this season or in 2009. Think about it this way. Eddie Royal will be the return guy when the season opens. He's also looking damn good at Wide Receiver. Should Royal become a intrical part of teh passing game, the Broncos have to protect him, don't they? Enter Alrdige. I'm not saying it will happen, but Alridge has been hearing his whole career he wasn't going to do it. Who am I to keep a man down?

Running back has always been an important part of the Shanahan/Broncos offense. While the National media likes to say the Broncos can plug anyone in the backfield and get 1000 yards, the truth is 1000 yards isn't good enough. With this offense, and this O-line, the Broncos need to 1500 yards. The group is young, with 3 rookies and 2-2nd year players among the 7 but it is also talented. Selvin Young has talked the talk all winter. Now in camp, it's time for him to walk the walk. If he does, the Broncos will be successfull. If not? Well.....