Game 1 of the pre-season is behind us and while the end result was a loss there were some encouraging signs. There were also some things that concern me a bit. Yes, it was only the first pre-season game. Yes, in reality, they don't mean anything. That doesn't mean, however, that we can't look at the game and find some positives and negatives to carry forward. There are also some distrubing trends that continue to manifest themselves on this team that need to get worked out over the next 3 weeks.

Using the games stats as a baseline, lets breakdown the game -

First off, Jay Cutler is back and better than ever. After the expected early jitters by the offense as a whole on their first drive, the Broncos first string offense dissected the Texans defense on a beautifully executed TD drive. Cutler was 7-9 on the drive, and finished it off by running 15 yards for the touchdown. Cutler 1 - Diabetes 0. Sure, it was only one game, but the Broncos are also practicing right now alot more than they will during the season. That leads me to think that Cutler is in for a HUGE season.

The same can't be said for Patrick Ramsey who was simply awful, and trend that has continued the entire Camp so far. Both interceptions were ugly, and Ramsey's 2.9 yards per pass are an embarrassment. Ramsey's feet are all over the place in the pocket and his poor mechanics lead to a horribly inaccurate delivery. Let's face it, the Broncos would be in trouble no matter what if Cutler went down for a significant amount of time, most teams would be, but if I have to into battle with a backup QB I at least want it to be a guy who will give me the best chance. Anyone out there NOT THINK the best chance to win is Darrell Hackney??

Hackney played well in his time, was able to move around in the pocket and moved the team very well. Could he do it against 1st Team defenses? Good question, but he looks a lot more comfortable in the pocket than Ramsey and seems to have a better handle on the offense, even if it is pared down quite a bit.

On an individual level, Selvin Young struggled to get going, but I am firm believer that running backs, like wine, get better with time, and 4 carries is not a real sample to pass judgment upon. Still, 3 total yards is a bit unnerving.

Andre Hall was solid and showed great vision. Anthony Alridge was able to change the pace a bit, and showed why many are excited about his potential. His 19 yard run in the 4th quarter was an example of what he can bring this team if used correctly.

As a team, the Broncos averaged 4.7 yards per carry, but that number is a bit deceiving. Take the QB scrambles out of the equation, and the number drops to 3.8. That won't get it done long-term, but again, I'll attribute much of it to the Texans familiarity with the Broncos offense.

The passing game was pretty vanilla for both teams. The Broncos did try and get deep a couple of times, with only Tony Scheffler making a reception of 30+ yards. Eddie Royal looked a bit lost at times, which is to be expected and does not concern me at all. Of bigger concern was the play of Keary Colbert. The Broncos are paying Colbert quite a bit of money, relatively speaking, and he has failed to produce. Unable to make a catch, Colbert also struggled in the run game, allowing his man to be involved in several running plays.

Colbert has been disappointing to date, but he still has time to make his presence felt. The rest of the receiving corp was so-so, but Scheffler looked healthy and that is a huge bonus. You could see the Broncos were also going with looks to fine out what combination will work best while Brandon Marshall serves his suspension. They are hoping Royal and Jackson can fit the bill, but only time will tell. 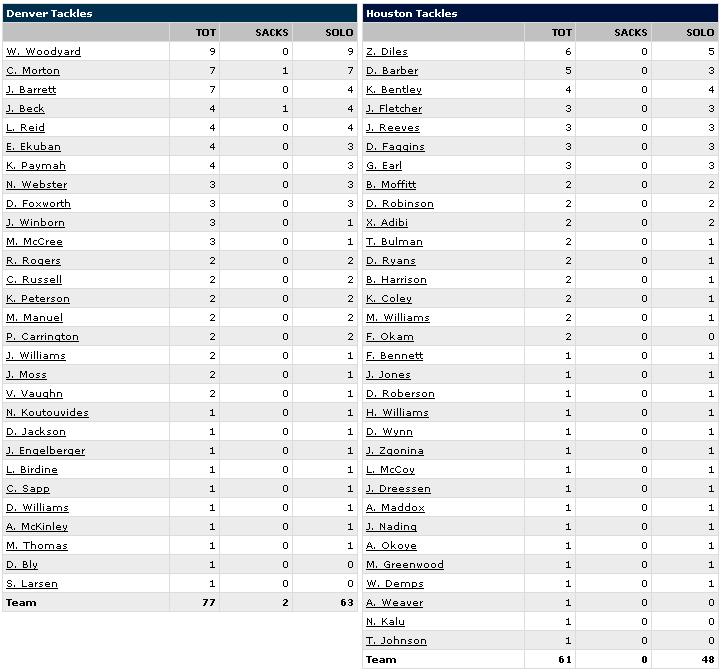 I was impressed with Wesley Woodyard, who showed he can make plays at the NFL level. The Broncos are going to have a decision to make with Woodyard who likely wouldn't last too long on the practice squad. I also thought the D-Line played ok, though there still just wasn't enough pressure up front. The Broncos D was able to get 2 sacks and did stop the Texans twice on 4th down.

I thought the defense did a nice job forcing the Texans to kick a field goal to win the game, though it was a bit of a downer that they could get a big stop and get the ball back to the offense after the game was tied at 16.

On the injury front, Boss Bailey seems optimistic about his ankle injury, though Shanny thinks Bailey could miss a couple of weeks. Let's hope it is not a High Ankle sprain and Bailey can be 100% in time for the Raiders.

Louis Green's injury was scary, but it looks like Green is going to be ok, though he is suffering from a concussion. 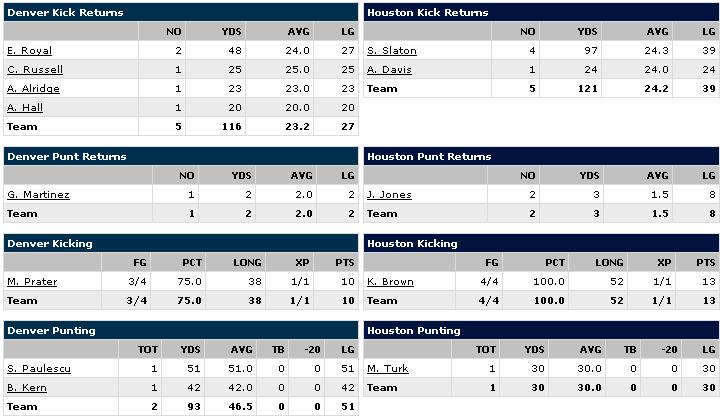 We'll start with Matt Prater, since Field Goals are going to be a point of emphasis with Broncos fans all season. On the surface, it's easy to say that Prater's miss from 30 yards is the reason the Broncos didn't win the game. If it were only that easy. The Broncos struggled, once again, scoring TD's in the Red Zone. We've talked about it all spring and summer. If the Broncos are going to be a contender, a real contender, they need to stop settling for 3 points.

As for Prater, I was more impressed with how he bounced back from the miss to hit his next 3. I was already confident in Prater, and nothing that happened Saturday night changes my mind.

The Broncos were able to win the battle of starting field position, averaging their own 30 yardline, while the Texans average starting position was the 27. That will be a key I will watch all season. No one has been worse than the Broncos the past two seasons. Eddie Royal was decent in his debut as the Broncos main return guy, but again, I'm not concerned and think Royal will be a huge additon.

I think it is pretty obvious that Sam Paulescu will be the starting punter.

I'd be remiss if I didn't mention the play of the offensive line. Yes, Ryan Harris struggled and there were numerous penalties. One stat that did catch my eye was this one - 0 SACKS. The line is young, and we are all well aware that the Broncos are starting a rookie at Left Tackle. Enough said. I'll deal with mental mistakes early in the pre-season, especially if every one of our QB's are kept clean. Illegal Formation, False Starts, those things can be corrected with time and experience. They are still a work in progress, but as a starting point it could have been a lot worse.

Sure, it might only be the Pre-Season for the Broncos, but you guys and gals are in regular Season form. Thanks to all of you for sharing your Broncos gametime together with all of us!