The Broncos don't have much time to enjoy Saturday Night's win over the Cowboys, turning quickly around to prepare for a Friday Night match up with Aaron Rodgers and the Green Bay Packers. That means we can't dwell on it for too long, either. After watching and studying the game, I did want to take a few moments to break down a few of the things I saw. At the end, of course, will be a break down of community participation in the Open Threads.

I have gone on record saying that wins or losses in the pre-season are not as important as playing well for 60 minutes. I definitely feel that way, but it sure does feel good to win a game. I am looking for progress as we head through August, and the Broncos improved from Game 1 to Game 2. Let's break it down --

It was obvious the two teams had different things in mind coming into the game, but it was still the Cowboys 1st team defense that Jay Cutler dissected on Saturday Night. I can remember back in 1998, after the Broncos had won the Super Bowl and were preparing to defend. They didn't want to lose any game, ever. Cowboys fans will say, and they have to me, that the Cowboys took it easy on the Broncos, especially after all the hub-bub last year. Maybe. But as an athlete, you never want to be embarrassed, and Cutler did a little bit of that.

Jay Cutler has improved just about everything in his game. Footwork, mechanics, delivery, the way he looks off of receivers. Yes, we all know about the diabetes stuff, but this is more about Cutler feeling comfortable and confident in the offense than it is about insulin levels. Cutler is going to the line of scrimmage, reading the defense, and knows at the snap where he is going with the football. Cutler is also getting the Broncos into the end zone, scoring 3 TD's in 6 offensive possessions. There could have been more points by the first strong in the 2-minute drill, but Matt Prater's long field goal at the end of the first half went wide. More on the later.

I thought Patrick Ramsey came in, and after a disastrous beginning that was saved by undisciplined play by the Cowboys, Ramsey settled down and started to make some throws. He is still slow at reading through his progressions and frequently delivers the ball late. It pains me to think of how dummied-down the playbook would have to be with Ramsey at the helm.

The Offensive Line once again had its' ups and downs in the passing game. There were once again way too many penalties, with Ryan Clady and Chris Kuper getting hit with holding penalties. More importantly, Jay Cutler once again stayed clean as the O-Line did not allow a sack in the first half(the sackless streak ended in the 4th quarter when Darrell Hackney was sacked). I liked what I saw from Ryan Clady, who did a solid job on DeMarcus Ware. There were time Ware even stunted inside to try and avoid going up against Clady, a good sign since that means it will usually be Ben Hamilton or Tom Nalen/Casey Wiegmann that the De is going to get a face full of. I am happy about where the O-line is right now in pass protection, but the penalties need to be cleaned up.

The running game is still a work in progress, with the running backs and offensive line equally to blame. Selvin Young had better step up his play or he may find himself with the 2nd team. It is not a secret that Ryan Torain was catching the eye of the coaches before his injury. Now its Andre Hall that is pushing Young. It's more than just stats, so don;t focus on them. Hall was the man behind Cutler for two "crucial" running plays in the 1st Quarter, not Young. The first was a 4th and 1 inside the 10. It was a similar play to another 4th and 1 last season against the Jags. On that play, Selvin Young took a hand off and tried to break it outside. He was stopped, and so were the Broncos. On Saturday, it was Hall that got the call, picking up the first down and nearly getting into the end zone. He scored on play later, crashing into the end zone for a 7-0 lead.

Young has been a step slow with his decision making, and his field vision needs to improve. It might be a confidence issue, which I doubt, or it might be a lack of work so far this season. It seems that Young does give up on inside lanes too quickly and prefers to bounce everything outside. The Texans and Cowboys have two of the best defenses interms of team speed and pursuit so trying to get to the edge is usually ineffective. That will need to improve.

Hall looked great, running hard and picking up the tough yardage. Michael Pittman came in and handled the work in the 2nd Half. Pittman is a vet and will be ready for the regular season.

It was unfortunate that Anthony Alridge couldn't go. I am intrigued, to say the least, in what he can bring to the offense.

The O-Line struggled a bit in the run game as well. Early on, the speed of the Cowboys defense was giving the group fits. Zach Thomas, who obviously has alot left in the tank, was too fast for Ryan Harris to get out to and block. That improved a bit as the game went on, but the young Broncos tackles have got to decrease the learning curve before the regular season.

The Broncos receivers had a solid game overall, enjoying a breakout of sorts. We'll start with the obvious -- Brandon Marshall is awesome. We all know it. No one can stop him, Adam Jones included. Try and get into the new and much matured Marshall's head, and he will catch pass after pass on you. He took some shots, as well, which improved my confidence in his recovery. There is no doubt he is going to have a huge season, and he'll be missed during any amount of time he misses.

Eddie Royal is the real deal as well. The Cowboys have decent DBs but Royal was able to get in behind the corner a couple of times. His double move on the 35 yard reception was a thing of beauty, as was the catch he made between Anthony Henry and Ken Hamlin, defenders that are alot bigger than Royal. He will ease the loss of Marshall.

Clifford Russell was intriguing to me as well. The Broncos made a point of trying to get the ball deep to him, and he seems to have decent hands. To put it bluntly, nothing Keary Colbert did seemed that much better than what Russell was doing.

Each game plan is different, but Tony Scheffler was a none factor. 1 catch for 8 yards is not the expected production from one of Cutler's favorite targets. 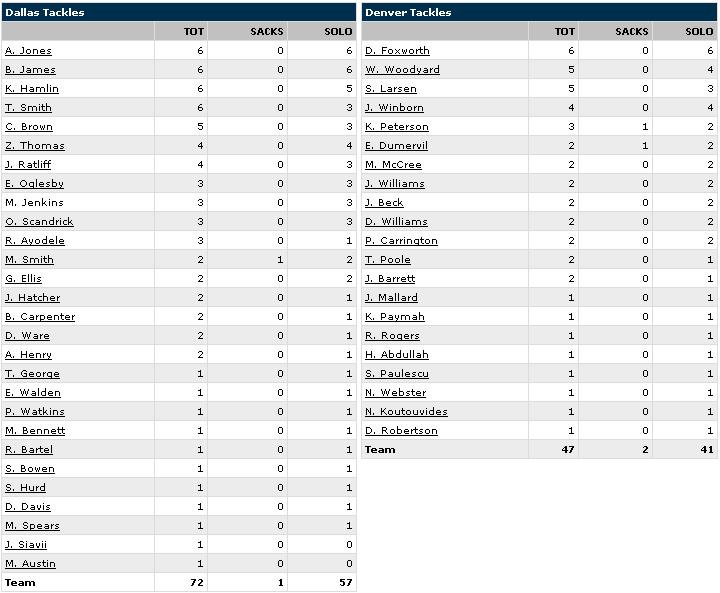 I was very impressed with the first team defense, Niko Koutouvides included. Don;t get caught up with tackles and numbers. The defense, with Koutouvdides in the middle, played better than when Webster was in the middle. Webster still might win the job, but I feel better about K-Tou now than I did a couple weeks ago. The Broncos seemed to be in the right lanes against the run, and while they didn't get constant pressure on the Cowboys' QBs, they did register 2 more sacks, both by D-Linemen.

D.J. Williams is going to have a huge year at the weak-side. He is flying around, reacting instead of thinking, and making plays all over the field. I though Jamie Winborn did a nice job filling in for Boss Bailey. He was disciplined and was able to finish off several tackles.

The safety play seems a lot stronger. John Lynch was a great player at one time, but the combination of Marlon McCree and Marquand Manuel is a better unit than Lynch/Ferguson or Lynch/Abdullah. On two separate running plays, Manuel made plays in the running game near the line of scrimmage WITHOUT lining up in the box. If the Broncos can disguise its defensive backfield coverage, it is a huge advantage. Domonique Foxworth needs to improve his reaction while the ball is in the air, but he may be the best tackler on the team.

The 2nd team defense didn't fair as well, starting on the first possession of the 2nd half. After not missing a tackle in the first half, the Broncos defense quickly missed 2 on the first two plays - Nate Webster whiffed on Felix Jones which led to a 28 yard run and Wesley Woodyard missed a tackle that led to another double-digit yardage play. Those plays are back-breakers to a defense. 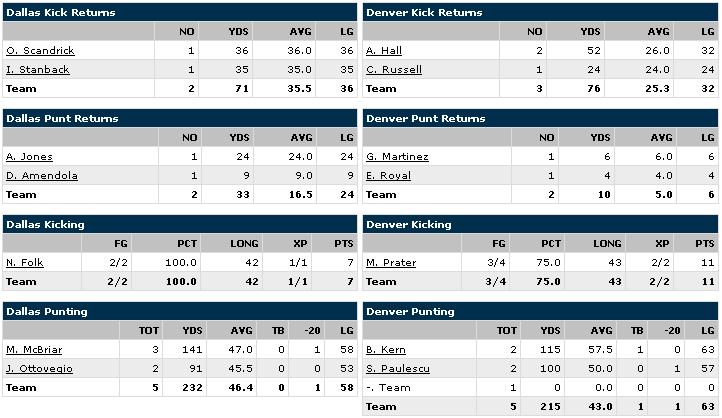 First things first, while it's true it's tru that Matt Prater did miss a field goal, it really wasn't his fault. Had he kicked where he needed to it would have assuredly been blocked. I'm sure kickers are taught to shank a kick if it means avoiding a block and possible return. As was the case against the Texans, Prater came back to convert his next 3 attempts and sits at 6/8 for the pre-season.

The punting battle is really starting to heat up. Sam Paulescu and Brett Kern are going back and forth, though a busted play could go a long way towards deciding it. IN the 3rd quarter, Kern had is punt blocked. Showing great awareness, Kern picked up the ball and ran 36 yards for a first down, quickly turning a negative into a positive. Not to be outdone, Paulescu was able to tackle Adam Jones on a punt return in what could have been a TD saving play. Jones amplified the play further by spiking the ball, being called for a penalty in the process. Last week I had given the edge to Paulescu, but after Saturday Night I'm not so sure. This battle will go down to the very end.

One last note about special teams. It is amazing how easy this game seems to be when you have good starting field position. Andre Hall was able to break a tackle on the opening kickoff, bringing the ball all the way back to the 35 yard line. The result? A short field, a limitless playbook, and 7 points for the Broncos.