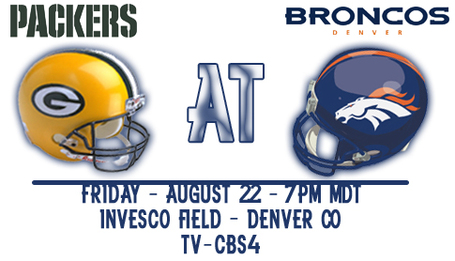 To Follow The Week From The Packers Perspective, Check Out AcmePackingCompany!

There just can't be enough corny catch-phrases on one site, so here's another one.  Five Point Stance will be my list of 5 things I'll be focused on each game.  Plus, it sounds better than "5 Things I'll Be Focused On Against The Packers".

This new feature gets welcomed to the site as the Packers come to town for Pre-Season Game #3.  We all know the starters will play most of the first 45 minutes so this is going to be our best chance yet to see where the Broncos stack up on both sides of the ball.   Here's my 5 Point Stance for tonight's game --

1.  Can The Starters Be Consistent For 60 Minutes -- Ok, so the first string won't play for all 60 minutes, but I am looking for a complete effort from the first group on both sides of the ball.  On offense, I am looking for a better effort in the running game.  It's time for Selvin Young to start running with some authority or it is likely he will lose the starting job.  There has been a lot of indecisiveness, and whether there is a reason for it or not, Andre Hall has looked better behind the same blockers as Young.  If the O-Line works better with Hall behind them, he has to be the starter, doesn't her?

On defense, I am looking for continued progression in regards to stopping the run.  The Broncos have done a solid job so far this season, especially last week against the Cowboys, a strong running group.  The Packers are going to be a run-heavy team in 2008, and don't forget, it was the Packers-Broncos game last season that cemented Ryan Grant's position as the starting running back in Green Bay.  A little pressure on the quarterback from the front-4 would be nice, too.

This is a bit of a general item, but consistency was a big problem in 2007.  Possession to possession, quarter to quarter, week to week.  If the Broncos are going to win a lot of game, they need to consistently play at a high level for 16 weeks.

2.  Jay Cutler Needs To Find Another Weapon -- Let's just assume, for the purpose of this article, that Brandon Marshall is going to miss the first two games of the season.  Jay Cutler needs to find another security blanket, and fast.  There are several candidates, from Tony Scheffler to Brandon Stokley to Eddie Royal.  Whoever it is, we need to get a sense of that tonight.

Marshall has become Cutler's go to guy, and for good reason, Marshall is a beast.  Without him in the lineup, the Broncos offense needs to find another beast, or a collection of guys that together will give the offense similar output.  I am a strong believer in Cutler's ability, and a strong believer that quarterbacks, more than anyone else on the field, can elevate the level of play of those around him.  I want to see some elevation.  I am talking to you Keary Colbert, Samie Parker, and yes, even Clifford Russell.

3.  Niko or Nate, Will The Starting MLB Please Stand Up -- I have been supporters of both at different times this training camp, and the time has come for me, and the team, to come to a conclusion.

Webster is by far the better athlete, but can put himself out of position.  K-Tou struggles in coverage and doesn't have the sideline-to-sideline speed that Webster possesses, but he seems more fundamentally sound, and I think that is more important from the MLB.

The defense as a whole seemed to play better last week with Niko in the middle, and it will be interesting to see how the guys progress this week, with Boss Bailey still out.  Either way, look for the Broncos to announce their starter sometime next week, with the starter tonight likely having the inside track.

4.  Time To Stop The Penalties -- I have been easy on the young offensive linemen so far with regards to all the penalties.  Holding is better than a 300 LB defensive lineman landing on #6, but all the procedure penalties - False Start, Illegal Formation, etc - have to stop tonight.  If Ryan Harris and Ryan Clady can continue to progress AND do away with the needless 5 yard infractions this could be a really, really good line.

I'll also be keeping my eyes out for Montrae Holland and when and where he plays.  I still believe he will regain his starting spot by Week 1, but the Shanahan dog house is never a good place to be.

It is looking more and more like Casey Wiegmann is going to be the starting Center.  I'll be watching to make sure the line calls look correct for the defense called.  Wiegmann has been good for a long time and I am not too concerned, though I am still holding out hope that Nalen will return.

5.  Cutler As The Holder -- This is a bigger deal then a lot of people think.  Cutler has yet to hold as a Broncos, for any length of time anyway, and I don't think he was a holder at Vandy.

Kickers can be very particular(see Ray Finkle) and Cutler had better get the laces out.  Jake Plummer handled the holding responsibilities and I think Cutler will do fine as well, but it is something to keep an eye on since the Broncos will be kicking alot of extra points in 2008!

One clarification.  I know the Broncos, especially ST Coach Scott O'Brien prefer to use the punter as the holder, but there has been some issues on the snap/hold this pre-season and the Broncos are considering using Cutler.  We'll see how serious they are tonight....

See ya at the Open Thread, and enjoy the game!