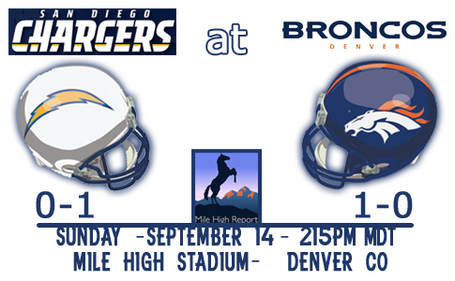 For all your San Diego Chargers News, check out Bolts From The Blue

Week 2, and Broncos fans are riding high after dominating the Raiders.  Can they do it again, and at the same time take a two-game divisional lead over the Poweder Blue???  Let's find out...

It's Broncos/Chargers. Who has "The Edge"?

This game has all the looks of a classic.  The Broncos definitely feel like they have a score to settle with the Chargers.  Jay Cutler is on a mission to prove to everyone that last year had more to do with his medical condition and nothing at all to do with talent, or lack thereof.  At the same time, when do you start to wonder if Philip Rivers is already as good as he's going to be?  He's solid, and has his moments, but too often can let his emotions get to him.

The Chargers are also beat up a bit, and I have no problem saying we may be getting our first shot at them at precisely the right time.  With L.T. dinged up, and Rivers still coming back from the knee injury, the Broncos need to tak advantage of the opportunity to put the Chargers 2 games down.

I expect a close game throughout, but the Broncos have too much firepower.  Jay Cutler, Mike Shanahan and Co. have the offense rolling, having scored on 13/19(68%) possessions in the pre-season and regular season.  With Marshall back in the lineup I don't expect that to change this week.  Oh, and did I mention that Mike Shanahan just doesn't lose home openers?? (14-1, 12-1 w/ Denver)  Since 1984, the Broncos are the best in football in Home Openers(21-3).  They don't plan on losing now.

Oh, please take a moment to "BUZZ UP" the post at the top of the page.  Thanks!