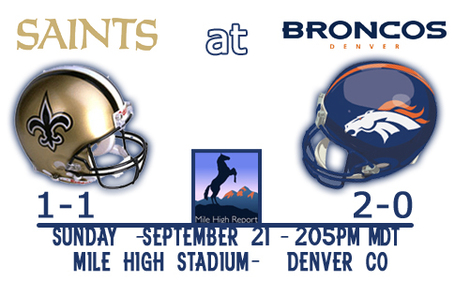 For the view from the Saints side of things, check out CanalStreetChronicles.com

The Saints were my dark horse pick to go deep in the NFC playoffs for '08. They have a lot of talent on both sides of the ball, and underperformed in 2007 due to many key injuries. But the injury monster is back in full force, and early in the season.

The Saints are a very talented team, and could be easy to overlook. With the injuries they have, we may catch a break and have an easier game than we might have had. But it would be foolish to count them out. Let's take a look at what the Saints bring to the table, and what they might not.

The three biggest additions to the Saints defense where supposed to be big. Vilma (at MLB) was someone that Denver fans had their eyes on, but the Saints got him. He leads the League in tackles. DT Ellis was taken in the draft (someone else that many Denver fans were clamoring for). Last year, the Saints picked up Clancy (DT) from FA. With two big name DTs, and a terrific MLB (who is also great in coverage), as well as Fujita and Simeneau at LB you would think the Saints could stop the run.

But they haven't in their first two games. TB ran for 146 yards (a narrow victory for NO), and WAS ran for 149 yards.

Here's what we know. CBs McKenzie,Gay and Glenn are questionable. LB Fajita is questionable as is SS Harper. Out is LB Simoneau. That is an awful lot of starters folks. So now things seem to be more tricky for the Saints right? There's more.

Well, it doesn't stop there. According to this article from the Sun Herald, the Saints are having severe problems wrapping up opponents:

The speedy Moss took an end around 27 yards as he split the tackle attempts of the Saints' Will Smith and Kevin Kaesviharn in the first quarter. Then Moss' 23-yard pickup on a slant route where he made Josh Bullocks and Usama Young miss was a key play in the Redskins cutting the lead to two points.

The Saints defense also had troubles wrapping up running backs Clinton Portis and Earnest Graham during the first two weeks of the season. It's led to the Saints surrendering 403.5 yards of total offense a game, which ranks the team 29th in the NFL.

"I thought we had some missed tackles in the secondary, especially in that fourth quarter," Saints coach Sean Payton said. "All of a sudden some smaller plays became bigger plays. That was a little bit of an issue a week ago and we have to address that and see if we can have that corrected."

Next up for the Saints will be the Denver Broncos, who are averaging 463.5 yards a game (third in the league).

"They're a good team," Payton said. "The main focus is the Saints right now. And that seems a little bit like a cliché, but we're going to play a better team this week than we just played. They're 2-0 and it's a tough place to play; it's a louder environment than where we were just at. We're going to have to suck it up."

This is where the pairings look good for Denver's offense. Starting with the receiving corps, Denver features Marshall or Royal (pick your poison) paired against an injured starting CB, and a back-up, or perhaps two back-ups. Denver's receivers have already played (in my opinion) two CB tandems in OAK and KC that represent two of the top five (if not top three) CB tandems in the NFL. NO is a definite downgrade at this point.

On top of this, consider pairing your injured starting CB (or a back-up) with either Royal (agile and fast) or Marshall (physical). And who will back them up? A back-up safety on the stong side. Yikes!

But it gets better (if you're a Denver fan). Who covers our elite TEs? In a one TE set, it won't be Fujita (injured - out), and it won't be a starting strong safety. There will be a mismatch for the strong side TE in any 1, 2, or 3 TE set.

That's the state of the passing game. The running game isn't much different. While Denver is averaging nearly 5 ypc through the first two games, they aren't running the ball much. NO is giving up nearly 150 yards per game rushing.

NO has a good defensive line. While you can't function without a good DL (see Denver last year), you can't win with just a good DL either.

But that's only half of the game. What about the Saints offense?

The Saints on offense

The first thing you notice about the Saints front five (plus their TE) is the abundance of the letter "J". Jeremy, Jamall, Jamar, Jonathan, Jahri, and Jon. This doesn't mean a darned thing, but I thought I would throw it out there. : )

On a more serious note, the Saints have weapons. For as long as Shockey has been in the NFL, folks have debated if he is the real deal or an average guy who has gotten a big name. I won't get into that so much. What I will point out is that he is a physical receiver, and has the potential (and the experience) to keep Denver honest in coverage. This would normally present a problem for Denver, ala the Chargers.

With Colston at WR, Shockey at TE, and Bush at RB (and Brees at QB) we have a similar match up difficulty that we should have with SD. In this vein, NO would have the ability to rack up points on Denver. But a key piece of the puzzle, Colston, is out. This means that Denver can focus on the run.

On paper, the run game of the Saints should be intimidating. This fan post over at Canalstreetchronicles.com explains that at least one RB, McAllister, isn't likely to be a threat. But Bush could be a factor.

A lot of MHR readers (and staff) are taking sides on whether the Denver run defense is better than it looks, or worse that it looks. This game will be the third game against a reasonably good running back, and we should have our answer this week. As good of a QB as Brees is, the Saints should try to keep the Denver offense off of the field by running the ball, and dare the Broncos to stop them.

The problem is, the Saints are only averaging 78 yards rushing over the first two games. On the flip side, Denver is allowing an avg of 115.

The Saints best chance for a favorable match-up might be Shockey against Boss (LOLB) or against Manuel (SS).

This is the point where I list every position on a football team, then mark which team has the better skill set. Without injuries, it would be closer. But with injuries factored in, only the Saints defensive line gets the edge.

Denver faces a 4-3 defense. They can play one TE for both run and pass plays. If the Saints try to pressure Cutler, Graham should be the obvious choice at TE. Because of the 4-3, Denver can choose to run wide more than in the last game.

With the injuries on defense, Denver can play their misdirection game and get more "bites" (where the defense over pursues). Denver can air the ball, and dare a banged up or back-up secondary to stop them.

Denver can pass early to establish a lead. At this point, an opposing team then has to wonder if Denver will run to eat clock, or keep passing. With the Shanahan offense back in gear, teams should have a hard time knowing which way to go in the second half.

So how does a team stop Cutler? I think we're learning that Marshall and Royal are too much for even the best CB tandems in the League. You stop Cutler the way you stop Peyton Manning; with pressure. The problem is that Cutler can go mobile without losing his aim or strength, and Denver's OL is like the secret service. If a team does get to Cutler, Denver doesn't hurt having to run the ball (averaging 6 ypc).

The best approach to beating Denver is the SD approach. SD was within a point of winning by shooting out the game. Of course, they had the weapons to do so. Most teams don't. This is why I feel Denver has an excellent chance of hitting the playoffs, but when they get there, they'd better be able to at least slow other teams. They didn't slow SD. The Saints (again with so many injuries, and missing leading receiver Colston) just may not have the weapons at this point in the season to shoot it out. If they have to engage in a high scoring affair, the edge goes to Denver.

The Saints coach is an excellent play-caller and knows how to adjust. On the other hand, Shanahan is on the other side of the field.

While I try to be a realist in breaking down any game for Denver, this match-up really looks one sided. Without the Saints unfortunate injuries, this game would be close, and could have upset potential. Right now, I have to take Denver. I'll be surprised if it is close at all.