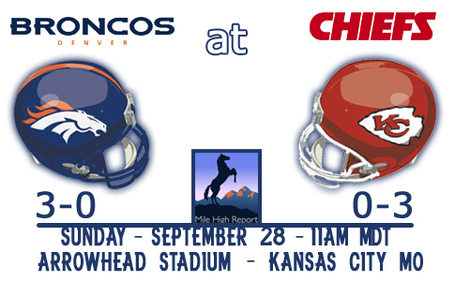 Yesterday we took a look at both sides of the ball for both teams, and looked at some adjustment issues. We also tried to come up with a game plan for KC. Today, let's look at Denver's possibilites, as well as what we can do with system match-ups.

Game planning is tricky to do when your weapons are down to a third string QB, and an injured MLB and CB. On the other hand, Denver is healthy and has a lot of weapons.

Denver has three choices. They can stick with the air show that is leading the League in points so far. They can also run the ball (but why?). They can also balance their attack. I'm a big advocate of a balanced attack, but not for this game. On paper, the mismatch between Denver and KC looks large enough that Denver should just throw the ball early and often. Surtain might be out at CB, and Edwards is out at MLB. If the secondaries of the Raiders, Chargers, and Saints can't sto the air war, how can KC?

If Denver gets the early lead, KC is forced to use a third string QB to throw the ball against an elite secondary. Their only hope would be the terrible pass rush of Denver.

Denver is transitioning away from a pure "West Coast" offense, and seems to be using more of a spread offense. Denver also seems to have abandoned their run first philosophy (while keeping the zone block). However, Denver still manages good yardage per carries.

KC uses a two gap approach at DT, anchored by draft star Dorsey. This should make the zone block a little less efficient for Denver, but the loss of Edwards at MLB should more than make up for this. Denver can run wide, and take advantage of KC's narrow formation, or try the gut and challenge the back-up at MLB. But why bother?

KC is not the team they were in the secondary in seasons past. Losses at SAF and CB in the offseason have led to a down turn in quality. The biggest name now is Surtain, who is injured and questionable for this weekend. Denver can (and should) give Jay the ball and tell him to let it fly.

As banged up as KC is, and with their talent, they may be tempted to zone a lot. Underneath, Royal has proven he can curl and hook like few others. Also underneath, Marshall has shown he can outmuscle most defenders, and get yards after the carry.

If the Chiefs go too tight, Royal is speed demon. Stokley remains one of the best (if not the best) slot receivers in the NFL, and can keep the Chiefs from doubling up on either Marshall or Royal. If KC tries to flood the field with DBs, any of three Denver TEs are mismatches for the KC OLBs or SAFs.

Below, members of the Secret Service, also known as the Denver Offensive Line. They have kept King Cutler untouched in three games so far. On defense, Denver is a work in progress. While this isn't great news for Denver fans, it will cause confusion for KC. Does Denver come out with a 3-4, as they did against the Saints? Will Denver make some tweaks with personnel, allignments, or schemes to improve the pass rush, or just start blitzing?

Gonzales (TE) and Johnson (RB) are the heart of the KC offense right now. I'm going out on a limb and predicting that Denver will use LOLB Boss Bailey to cover Gonzales, freeing up SS Manuel to either play run support or deep zone. Shanahan was quoted saying he likes the speed that Boss brings to the table, and thinks he can hang with the TEs out there. I'm not sure who wins such a match-up, but it frees up the rest of the defense if Boss can slow Gonzales.

Johnson is another story. As poor as the KC OL has been for awhile, Johnson is a tough, physical running back. If Denver's DL isn't firing on all cylinders, Johnson is the guy to take advantage. Unfortunately for KC, if Denver is able to score early and often in the air, Johnson won't be allowed to be a factor.

Whereas other teams have shot it out with Denver and stayed toe to toe, it is probably asking too much of KC's Huard to do the same without turning the ball over.

Denver is undefeated, KC is winless. KCs big ace in the hole is that they always play us tough (though we swept them during the dark year of '07). The game is in KC, always a tough venue for Denver.

Still, on paper it's hard to see how Denver loses this game. Denver only needs to take the game seriously and play hard for four quarters to ensure a win, and a very possible blowout.