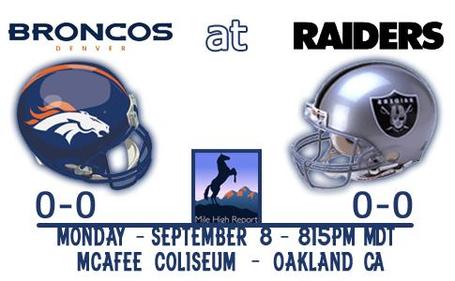 For a look at the game from the Raiders view, check out SilverandBlackPride

On the first week of the regular season --
"It's enjoyable. You look forward to it ever year. We have been working throughout the offseason-obviously the OTAs, summer camp. We have gotten a chance to see our team in live situations. We have a lot of young players playing on Monday night, and I'm looking forward to it."

On whether playing without WR Brandon Marshall will change the game plan against the Raiders --
"I don't think Brandon will dictate the (complexity) of our game plan. We have some young players, so it might not be as deep as it normally is, but we have enough to show up and play."

On Raiders QB JaMarcus Russell --
"He hasn't played a lot, so we haven't seen a lot of him. We have watched a lot (of him) on film. He has played in one game as a starter and played in four other games. Like all other young quarterbacks, it's a growing process. You know how talented he is, being the first pick in the draft. Everybody knows his size, his arm strength and him being a No. 1 pick. So he has a big, big upside and he has a good supporting cast around him.

"He was practicing the whole season, so that is sometimes better than playing-you get some good reps in practice and a chance to grow with an offensive system. He played enough to feel, I would think, somewhat confident in the offensive system, and he played extremely well in his one start against San Diego. Hopefully he doesn't play that well Monday night."

On Raiders RB Darren McFadden --
"He is averaging over five yards a carry, I think 5.4. He has had a good preseason. The have given him a lot of reps and he is a weapon. He has great speed and everybody knows what he did in college. He is going to try to do that at the pro level. They are very coordinated in their offensive line. They went from 29th in the NFL in 2006 to sixth in 2007 (in rushing). That's a big, big jump. There is no other team that made that type of jump. They are running the zone blocking scheme very, very well. They have a lot of confidence in it and they are very well-coordinated, so he is going to a system that gives him a chance."

On why the media is not predicting big things from the Broncos --
"We understand why they are. When you take a look at where we were at last year, both offensively, defensively and special teams-wise, why would they pick us? We have to go out there and prove ourselves each week. We are a young football team and we just have to go out and get it done. If you win games then you get the attention you deserve."

On whether there is extra motivation playing the first game on Monday night --
"The first game of the season is always big, especially in the AFC West on the road on Monday night. It's a big first game for us. We get a chance to showcase our team on national television... It's something that we look forward to."

On Broncos TEs Nate Jackson and Tony Scheffler --
They are both football players. You have guys who are very competitive. We have three tight ends (Jackson, Scheffler and TE Daniel Graham) who can play, and it's a good weapon to have. You can go into a game plan with a three-tight end set or a two-tight end set and not skip a beat. Not very many teams have the luxury to have three tight ends like we do. All three will dress and all three will play."

On how Scheffler has improved in his blocking --
"Tony has done a good job. He has improved every year. He is not at the level of Daniel Graham, but he has improved drastically from when he first started."

On how much the Broncos have changed since the last time they played Oakland -- "We have a lot of good guys. The roster has changed, the guys are a little bit younger and we have some guys from different teams. We are a whole different team."

On the offense's play in the preseason --
"The guys did really well. The backs picked up well, the line protected the front four really well and the receivers caught the ball and were run blocking well. Now it is for real and we will see what happens."

On the play of Denver's rookies in the preseason --
"They had a good preseason. We will see what happens in game one and the rest of the season. We have a lot of rookies and a lot of guys from different teams and it's their first time in this offense or defense, so we will keep it basic and do what we do well and go from there."

On being without WR Brandon Marshall for the season opener --
"We would like to have him, we would like to have him every game. He is an offensive weapon that you are not going to find very often in this league. He does some stuff on the field that is amazing. We are going to have to make due. With the receivers we have, the tight ends and the running game, we'll have to all pull together to make up for it."

On the Raiders' defense --
"Their defensive is solid. They were good last year against the pass and this year they will be even better after getting (DeAngelo) Hall from Atlanta and (Gibril) Wilson from the Giants. Number 21 (Nnamdi Asomugha) on my left side is as good as it gets. Our receivers are going to have a handful. They are going to press us and get in our face. Hopefully we can get the running game going early and get some one on one matchups out there. Without Brandon (Marshall), it is going to be tough."

On other teams being considered stronger candidates for a Super Bowl run --
"They are all good teams. We will see how it goes. We are a whole different team this year. Those teams are proven and we have to go out there and do it week by week."

On Raiders wide receiver Javon Walker's offseason --
"It is tough. You never want to see a former teammate or any guy in the NFL go through that. Javon is a tough guy and he is going to pull through it. I wish him the best over there."

On how much of a physical difference he feels going into this season compared to last --
"Physically I was fine but mentally I was not there yet. I was still learning the offense and still learning the defenses and I was trying to put it all together. This year, I am a little bit more comfortable. We obviously have a lot of new guys that we have to get used to, but I feel good."

On his tight ends --
"They are good, really good. DG (Daniel Graham) is a professional and he is as good as it gets. We have Tony (Scheffler) and Nate (Jackson). Those two guys present some problems for some linebackers. They are good blockers, great route runners and they are good in space. With those three guys, I couldn't be happier."