It's another week, and that can only mean one thing.  Time for more Shallow Thoughts & Nearsighted Observations.  Yay!!!!

1.  I know the caution alarm has been being sounded on MHR that there is a chance that the 4-3 will be kept next season.  I even sounded that alarm once, myself.  But now, judging from various comments made by Josh McDaniels and Mike Nolan, I think it is pretty safe to assume that the 3-4 is coming.  That has gotten me thinking about holdover personnel, and it's not a pretty picture.

We really don't have too many front 7 people who are good fits for the 3-4.  I can say that I am pretty sure that  Marcus Thomas and Spencer Larsen are good fits, as they both looked good during the midseason experimentation.  I can say that I am pretty sure that Dewayne Robertson, John Engelberger, Ebenezer Ekuban, Jamie Winborn and Boss Bailey are bad fits.  There's nobody else who I even have a strong feeling about, one way or another.  What would be terrific is if Jarvis Moss converts well to OLB and Tim Crowder comes into his own as a DE, as Pro Football Weekly speculated over the weekend.  On the back end, I expect Dre Bly to be released because of his price tag.

2.  The real question to me is what to do with DJ Williams?  He doesn't fit the profile of 3-4 ILB or OLB.  On the inside, you're looking for downhill strikers who can shed blocks.  At OLB, you want athletes who can rush the passer, and drop back and play a short zone.  DJ is a 4-3 OLB, through and through.  He's a lateral pursuit, run-and-hit guy.  If I could get a LB needy 4-3 team like the Saints to part with a second round pick for him, I think I'd do it.  As much as DJ has been a nice player, his next game-changing play will be his first, and I just don't see him as a fit in a 30 front.  Wesley Woodyard is a fit as a nickel LB, but not in a base 3-4.  He's a minimum-wage guy, so it is a totally different situation than DJ.

3.  There's this idea which has circulated through the ESPN-o-sphere  the past couple years that the only way to build a good team is through the Draft.  While paying a guy small money in the draft is usually preferable to paying an equal free agent big money, this draft-only ethos is way oversimplified, and just completely without factual basis.

If you look at this decade's model franchise, the Patriots, they spit in the face of the idea, actually.  Since the arrival of the Belichick regime, the Patriots have annually grabbed up cheap veteran free agents (including Lamont Jordan, Heath Evans, Jabar Gaffney, Junior Seau, Mike Vrabel, Deltha O'Neal, and Rodney Harrison), who have then contributed mightily to their winning.  Add in a couple key trades (Welker, Moss) and one big splash signing (Adalius Thomas,) and you get a nice supplement to successful drafting.  The Patriots have always invested high draft picks on the defensive line, and you don't see a lot of free agent fill-ins there.

I bring up the Patriots, obviously, because of McDaniels.  I expect the roster construction to begin to resemble what the Patriots have done.  Honestly, it's already been going on in Denver for a couple years.  Would anybody say that Brandon Stokley, Daniel Graham, or Michael Pittman were bad pickups?  Most of the defensive acquisitions flopped lately, but the concept was right, if not the pro personnel evaluations.  You need to do well in free agency, as well as the draft.  Ignoring it totally is analogous to not hiring a special teams coach, because it doesn't matter.

4.  If we have a 3-4 defense, I think we currently have 4 legitimate starting players, (assuming I am right about DJ Williams being moved, and Dre Bly being cut.)  That is Marcus Thomas at RDE, Elvis Dumervil at LOLB, Spencer Larsen at ILB, and Champ Bailey at CB.  You have Moss, Crowder, Woodyard, and Barrett who are maybe guys, but probably all 4 are situational players.  So you need to find 7 starters between the draft and free agency.  Here are some non-regurgitated ideas.

DE - People will excitedly talk about pie-in-the-sky names like Julius Peppers and Terrell Suggs (who'd be a 3-4 OLB, really.)  The guy I like is Chris Canty from the Cowboys.  He is 6-7, 300 pounds, and he's just a very impressive young 3-4 DE.  He would be my number one target in the entire free agent class, actually, given a switch to the 3-4.  An outside-the-box idea is planning ahead in the event that Richard Seymour gets cut due to a high cap number, as speculated on in the Boston media.

NT - In Free Agency, this is slim pickings.  I wouldn't exactly call Albert Haynesworth ego-suppressed, and I think he's suited to be a 2-technique guy much more than a 0-technique.  The only halfway credible true 0-technique is Tank Johnson, and we all know the baggage he brings.  This should be a high draft priority, if not the highest.

ILB - A big-name guy who could actually be available is Bart Scott of the Ravens.  He, Suggs, and Ray Lewis are all free agents, and it is believed that Scott will be the one to walk.  He'd cost a lot, but he is excellent.  The guy I like, and a guy who will be switching teams, is Channing Crowder.  He played very well in a 3-4 for Miami this year, and would come significantly cheaper than Scott.  Andra Davis, who has spent the past 7 years in Cleveland, is a lesser/cheaper option too.

OLB - Karlos Dansby is free, but he almost certainly isn't getting away from Arizona.  All the other good names are 4-3 types.  Rush LBs are fairly easy to find in the draft, and one should be gotten there.

CB - Nnamdi Asomugha is nominally free, but will never be a Bronco, so just forget about it.  Dunta Robinson is free, but will cost a lot more than he is worth.  I think CB becomes another draft priority, and just to throw out a name that I like, there's Sean Smith from Utah, who is 6-3, and plays with excellent technique.  He's currently graded in the late 1st, early 2nd round area by most prognosticators, but he looks better on video than he will on a 40 track.  I do think Justin Miller is worth signing as a KR in free agency.  He's very dangerous.

S - There is a bunch of talent here in free agency.  Sean Jones is the best all-around player, but he's had a few injury issues.  Oshiomogho Atogwe is very good, and he's a ball-hawk.  Jermaine Phillips is a very good SS, but he's best suited for Cover-2.  The guy I like the best is Yeremiah Bell, who many will remember, I just heart his game.  He's active, and always around the football.  Scout.com has him with 2 stars out of 5, but I saw him play like a Pro Bowler this year.  Another of their 2-star guys who are better than that is Jim Leonhard, who starts and plays well for Baltimore, and is also a good PR.

So, if I am the guy who is shopping, I would sign Chris Canty, Channing Crowder, Oshiomogho Atogwe, and Yeremiah Bell, and I additionally think about Andra Davis and Justin Miller if I can get them at reasonable prices.  Those are all reasonably priced players.  Then I draft BJ Raji in the first round (ESPN ranks him 14th overall,) Sean Smith in the second round (ESPN rank = 58th,) and Clay Matthews, Jr. in the third round (ESPN rank = 75th.) 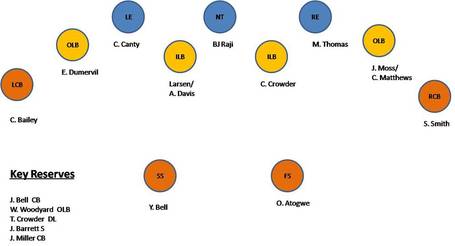 Tell me that's not A) Plausible, and B) a huge improvement over the current mess.

By the way, I had an extra second round pick from trading DJ, and I took RB Shonn Greene from Iowa.

5.  That was really long, so I'll move into the quicker-hitting stuff now.  I like the Spagnuolo hiring for the Rams, especially because he was the guy Pioli was likely going to hire in Kansas City when Kirk Ferentz inevitably turns him down.

6.  Jim Schwartz is going to turn the Lions program around, and I believe that Jeremy Bates will go there to help him, provided Al Davis doesn't name him Head Coach in Oakland.  Schwartz and Bates are known to be long-time friends, and it just makes too much sense not to happen.  They'll draft a combination of QB & LT in the first round this year, and have something to build with.  The question is, do they take a Stafford or Sanchez first and a Jason Smith type 20th, or a Andre Smith or Michael Oher first and a  Nate Davis type 20th.  I would personally go the first route, but if they fall in love with Davis, option 2 could be the way.

7.  Mike Lombardi had an excellent and insightful piece on Jon Gruden on National Football Post.  They worked together for many years in Philadelphia and Oakland, and Lombardi thinks that Gruden's inability to fall in love with a QB was ultimately his undoing.   It's hard to imagine what Tampa is thinking about that position at this point.  I wonder if they're not considering being players in the Cassel sweepstakes.

8.  I think the Jets will hire Rex Ryan, and the Raiders will still probably re-up with Tom Cable, though he'll only last this one year.  There are rumors that Don Martindale was very impressive in interviewing, but Davis virtually always hires offensive guys.  The Chiefs will ultimately fire Herman Edwards, and end up hiring Todd Bowles, once Kirk Ferentz turns them down.  Don't discount the fact that Pioli is Parcells' son-in-law.

9.  I like the Cardinals to beat Pittsburgh in the Super Bowl.  Their ability to rush the passer is going to cause huge trouble for the Steelers, and both Larry Fitzgerald and Anquan Boldin will consistently win their battles with the Steelers CBs.  Arizona has peaked at the right time, and is playing like a championship team.

10.  I'm really ready for re-loading season to officially begin.  I plan to attend the draft in New York this year, for the first time.  I am wondering how much interest there would be in having an MHR group organize something for that weekend.  Your feedback is requested and appreciated.