Share All sharing options for: The Greatest Broncos of All-Time.....By The Numbers -- #0

He we go.  This series, starting with #0, will continue throughout Re-Loading Season 2009.  It is my hope that it will inform, entertain, and create some debate among Broncos fans about different guys that have worn different numbers.  In some cases, there will be no debate because a number was only worn by one person.  That is the case with #0, who saw just one season of activity in a Broncos uniform. 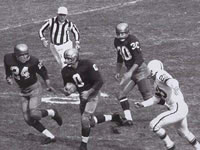 After being dealt to the Washington Redskins in 1958 Johnny O became the ‘Skins primary back for three seasons and was first and only player in Redskin history to wear the number "0".  In 1961 Olszewski played for the Detroit Lions before finishing his career with the Broncos in 1962, helping the Broncos to a 7-7 record, easily their best season in the 60's.

For his ten year pro career, Johnny gained 3,320 yards averaging almost 4 yards per carry and hauled in 104 receptions for 988 yards. He was inducted into the Cal Hall of Fame in 1993 and was named to the Sigma Nu’s All-Century Professional Football team. 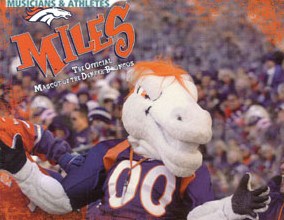 Officially, only players are eligable, but I'd be remiss if I didn't at least mention the Broncos favorite furry friend.