This seems to be the time of year when we all disagree. This recurring feature I've been writing has been inviting lots of disagreement, which, since I am writing my opinions, is a good thing.

Factions emerge each re-loading season, around free agents and potential draftees, and whether or not ANY free agents should even be signed. This year, we also had a coaching search to disagree on, and presently what looks pretty clearly to be an impending defensive scheme change to disagree on. Disagreeing is fine, and it's healthy. We can all learn from each other, through the course of disagreeing. Let's all remember to disagree positively, though, as that is what separates us at MHR from the cretins at other sites. We all have opinions, and we should all respect each other, because in the end we all want what is best for the Broncos.

Now, I present a fresh batch of Shallow Thoughts & Nearsighted Observations to disagree with me about, after the jump....

1. First, I want to address my thoughts about DJ Williams, which sparked some controversy last week. I haven't changed my mind about his ability to play inside in a 3-4, but I am going to try to express myself more clearly today, because there is a definite rationale behind my thinking.

The first question is, can DJ Williams be a good player inside at all? I don't think he was a very good MLB at all in 2007. He was second in the NFL in tackles, but a great many of them came way downfield. Some of that may have been due to his inexperience playing inside, and I will grant that that is a possibility. It is reasonable to think that it's possible that DJ would have improved in his second year in the Middle, if he had stayed there. The thing is, he didn't want to stay there, and the coaching staff evaluated his play there, and decided that the Webster/Koutouvides pu pu platter was a better bet inside. That's the best evidence of all that DJ isn't an inside guy.

Now, blocking fits and gap responsibilities are both different in a 4-3 than they are in a 3-4. I will show the inside box only against both fronts in the following diagrams. The offensive play is the same in both diagrams, a simple Lead Draw to the HB.

First, let's look at it against a 40 front, which we're used to. 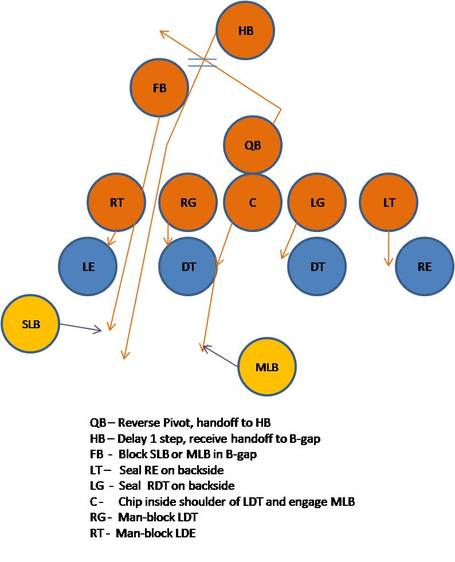 Note that the QB initially turns away from the direction of the play (which is called a reverse pivot.) This is designed to cause the MLB to initially start to his right, or at least think about it. The key block on this play is made by the Center, who has to very quickly chip the playside DT's inside shoulder, and then get out to the second level to meet the MLB, who will be moving laterally to his left once he reads the play. (Incidentally, Tom Nalen is the best C I've ever seen at doing this. He deserves to one day be in the HOF, like a lot of Broncos do.) The FB is free on this version of the play to hit either the Sam or the Mike, whomever is a more imminent threat to the HB. The key thing here is, the Mike's assignment is to move laterally down the line, and then make the tackle, as close to the line of scrimmage as possible. 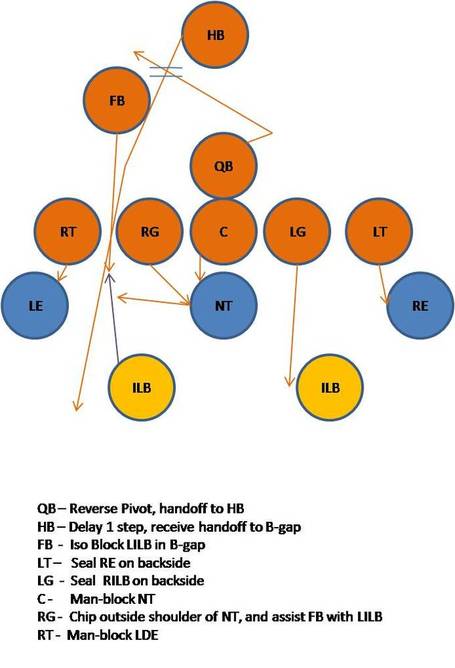 Notice in this version of the play that the playside Guard is now the guy who is chipping and seeking the ILB. The ILB is reading the FB, and running downhill into the hole to take the FB on. He hopes to make the tackle, but his main task is to physically defeat the FB at the point of attack, because that will at least make it easier for somebody else to make the tackle behind him.

OK, what am I getting at? The MLB in the 4-3 is the centerpiece of the defense. The various 40 schemes generally try to funnel the action to come inside to him. It's his job to run laterally from sideline to sideline, and to take good angles to the ball. The job favors athletic, instinctive, and hard-nosed guys like Al Wilson and Brian Urlacher. DJ really only had the athletic part down in 2007, and he wasn't so good in that position.

The ILBs in the 3-4 are gap-fillers, first and foremost. Once they read run in the A or B gaps, they need to run straight ahead into the gap, and take on a blocker, with the mission being to clog the hole. When they hit the blocker, he's now in the runner's way, and the runner has to choose one side or the other of his back to run to, and then, the best ILBs can read that move, and play off the block to make the tackle. A solid one at least clogs the hole, and somebody else makes the tackle.

The missions of the 4-3 Mike backer and the 3-4 Inside backer are totally different. The skill-sets required are also totally different. While ILBs are generally larger, it's not necessarily about size. I keep seeing DJ's size compared to James Farrior, so let me clarify. The issue comes down to skill-set. The only question which really matters is, can you (and will you) sacrifice yourself to blow up a blocker in the hole?

We all seem to get that D-Linemen in a 3-4 have to be ego-suppressed, but the same is true of the ILBs. Usually, your role is to get blocked, and to play off the block. I have never seen DJ Williams willingly take on blockers, so I question his ability and/or willingness to do so. He has always been a block-misser, and a lateral pursuer, not too different than his college teammate Jonathan Vilma, who struggled mightily in the 3-4. One scheme favors that kind of guy, but the 3-4 isn't the one which does. This simple lead draw? I would run it (as well as straight-up power handoffs) at DJ repeatedly, and make him prove that he is willing and able to cowboy up in the hole and make a play.

This is not meant to be negative about DJ, because I think he is a pretty good player as an OLB in a 4-3. I would be willing to check him out as an OLB in a 3-4, and I don't think the case is as clear there, whether he could play there or not. But everything I know about defense tells me that DJ WIlliams is not well-suited to be a 3-4 ILB, and that he never will be. Feel free to disagree with me, and to express your disagreement, but understand that I am not pulling this out of thin air.

2. I watched the Senior Bowl this morning. You have to love NFL Network. Some rapid-fire observations follow.

a. On the LB front, I liked Scott McKillop of Pitt as a 3rd-4th round ILB. He isn't the fastest guy, but he looked stout in the hole, as he did throughout his time at Pitt. He will be a solid starter in somebody's 3-4 in the NFL.

b. I like CBs who tackle well, and Victor "Macho" Harris (Va. Tech) and Ellis Lankster (West Virginia) both showed something there. Lankster had an interception also, and Harris was very good in coverage throughout the game.

c. The best CB in Mobile was easily Alphonso Smith, who is a big-time play-maker from Wake Forest. He reminds me of Antoine Winfield, other than the fact that he can catch. Alas, he dropped a sure TD in the game, but the break he made on the ball was spectacular. He'll go somewhere in the 20s, provided he runs well.

d. Andre Brown (RB-NC State) will be a good tandem back in the NFL. He will probably be a second-round pick, and he's got excellent size and quick feet. He was the best RB in the game.

e. BJ Raji showed nothing in the game, after being the talk of the week of practice. He got handled all game by Alex Mack and Max Unger, who, along with Eric Wood and Antoine Caldwell, make up an uncommonly excellent crop of Center prospects this year. All four of those centers played well, and each spent some time at Guard too.

f. Rey Maualuga might be starting to grow on me. He had a hideous missed tackle at the line of scrimmage on a Cedric Peerman 20 yard run, but he came back to force a fumble and blow up a screen pass later. He looked fast to the ball a couple times, which I liked to see.

g. Brian Cushing is a future star in the NFL. He is really well-coached, and he takes great angles to the football. I also watched him blow up Andy Levitre, a Guard, a couple times. There is no way he doesn't go in the first round.

h. The best D-Linemen in the game were definitely Peria Jerry (DT-Ole Miss) and Robert Ayers (DE-Tennessee.) Both of them were downright dominant at times.

i. Derek Pegues and Louis Delmas both looked fast and active at Safety, and Pegues had a nice return on a kickoff in the game.

j. The WR crop was thin, but there are a few keepers there. Juaquin Iglesias (Oklahoma,) Brian Robiskie (Ohio State,) and Mike Thomas (Arizona,) all lack a lot of flash to their games, but all three will be reliable NFL players. The one I like the best is Robiskie, whose dad Terry is a long-time NFL receivers coach, and currently serves in that role for the Falcons.

k. If you like pu pu platter, you should have seen the QBs in Mobile. Graham Harrell (Texas Tech) was terrible, and definitively showed that he can't play at the NFL level, even as a backup. His arm makes Chad Pennington's look strong. Pat White (West Virginia) played fairly well, but he is doing himself a disservice, because he is no NFL QB. Nathan Brown (Central Arkansas) is a marginal late-round prospect, but he has an ugly side-arm delivery. John Parker Wilson (Alabama) showed good athleticism, but not much in throwing the ball. He looks like a 3rd stringer in the NFL. Rhett Bomar (Sam Houston State nee Oklahoma) had the strongest arm of the 6 QBs, but his accuracy leaves a LOT to be desired. Cullen Harper (Clemson) looked the best overall to me, of the 6, and I think he'll be the best pro. He has the look of a Frank Reich or Gary Kubiak, a valued long-time backup QB. He and Bomar are probably 4th rounders, Wilson is a 5th rounder, and Brown and Harrell may or may not get drafted at all. If White comes to his senses and starts working out at WR, he could be a 2 or 3, based on potential and athleticism alone. If he insists that he is a QB, it will be the late rounds for him too.

3. How about those Shanny-to-the-Chiefs rumors? That was pretty irresponsible journalism for Chris Mortensen to report it as virtually a done deal, and then have to basically retract a couple hours later, of course, blaming his anonymous source.

4. I am starting to like the idea of trading down in the draft, if it can be pulled off. The Broncos need quantity of quality. It got me thinking. Is Jim Goodman the trader now? Has this been made clear? All I have heard is that he has final say on personnel decisions, but a pick is an intangible asset, until it is exercised.

5. Let's all try not get too attached to specific players in the draft. After all, somebody you loved may get drafted by the Raiders, Chiefs, or Chargers and then what? Let's treat this process like we're at a target-rich bar, and remember that focusing on one target too much will probably just set us up for disappointment.