The Shift - Evaluating the Offense Weeks 1 - 4

Share All sharing options for: The Shift - Evaluating the Offense Weeks 1 - 4

During the course of the season, like many of you, I noticed our team had shifted numerous times both offensively and defensively. Not only did our formations change, but our scheme, our game-plans, our plays, who started, who was injured, etc. Symbolic of the Presidential race, our team seemed to be in flux and a major change was occurring and even more change was destined (allegedly). When I decided to put these statistics together and analyze how there was a shift from week to week on all sides of the ball - the team had direction. We all knew months before the regular season began that this was going to be a rough year defensively but a good year offensively; maybe we didn't know just how bad our defense would be or how good our offense would be - but we had an inkling. 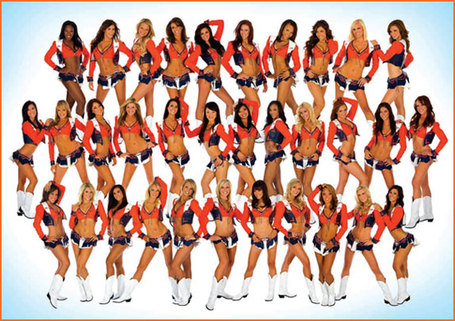 My point is that there was direction. We knew what Shanahan was doing and what would happen this year in the rebuilding season - defense, defense, defense. However, we didn't know that our team was going through as much change as it did as Shanahan was shortly fired and a new leader was installed. Is our offense set? Will McDaniels call the same type of plays that Bates did? What about the offensive scheme - before we didn't need a stellar running back; just someone to pick up 3 or 4 yards and come up with 100 yard games and keep the defense's honest. With McDaniels, will we suddenly need a stud running back that we have to invest a high draft pick into?

What about defensively; we now have more questions about the defense then we did before. We do know that it can't get much worse than it was in 2008 and while there seems to be a buzz about switching to a 3-4, will that really be what we do? What kind of a 3-4 will we run if we do switch? What about personnel? Studs like D.J. Williams were considered a shoe-in to make the team in 2009, if nothing more than the drama we've put him through; but what about now? Does D.J. really fit into a 3-4? Everyone is clamoring for Elvis Dumervil and Jarvis Moss to be moved to OLB in our 3-4 which would indicate that everyone wants a blitz heavy 3-4 defense; will this happen?

By analyzing this shift that our team went through this year; we have as much information as our new coaches do. What decisions they decide to make are up to them; however we will be just as informed as them. It's easy to be an armchair quarterback and talk about what the Bronco's should have done during the year; now we are no longer armchair quarterbacks. We are the individuals who are just as informed as our new coaches and our opinions and decisions are as informed as theirs.

Weeks 1 through 4 were arguably our best of the season. Our offense was stunning everyone, bloggers and commentators were struggling to update their outdated notes, we were climbing in power polls; life was good.

Week 1 saw us dismantle the Oakland Raiders. We all knew that we would win this game but the spanking we distributed to the faders was great. I spent most of the game standing on my feet in front of the TV, jumping up and down, beer in hand, my free hand raised above my head in a fist of jubilation most of the time, and thinking that Eddie Royal should be running for President. Jay Cutler was on fire, proving the talking heads wrong about his diabetes, our offense was shining, and the faders couldn't find their heads from their butts. Some of the game stats and notes from Week 1:

Week 2 saw arguably one of the most exciting games of the year as the Broncos scraped by the Chargers 39 to 38. While this game will always be overshadowed by the Ed Hochuli call, the Denver offense again showed up for the comeback of Brandon Marshall. After being suspended for 1 game, Marshall showed everyone that he was here to stay as he caught 18 passes and ran rampant in the San Diego secondary. The game went down to the final wire, the excitement amplified by the blown call by Hochuli that kept a Denver fumble recovered by San Diego on our game winning drive in Denver hands. While Ed did make an initially bad call, mistakes happen, and everyone could see how he made the call standing behind Cutler and the rules did not permit him to correct his mistake:

Week 3 was another nail-biter on home field. Perhaps a little distracted from the coverage of the Hochuli call during the San Diego game, the Denver offense is not the crisp, mistake free, scoring machine they were in the previous 2 games; while Denver wins the game 34 to New Orleans' 32, Denver only boasts 3 offensive touchdowns and 369 yards:

The Secret Service continues to shine allowing no sacks.

Week 4 was a total collapse offensively and the talking heads and bloggers quickly jumped and declared Denver's offensive dominance a mistake as it fails to show up against Kansas City losing decidedly 19 to 33. Everyone expected Denver to win the game and Week 4's loss would start the trend that Denver cursed themselves' with; losing easy games and listening to the media too much. Perhaps it was the effect of a young team, lack of strong vocal and veteran leadership, a lack of preparation by the coaches, or a combination of all; but this was easily Denver's worse game offensively in the first quarter of the season:

The following are Jay Cutler's statistics over the first quarter of the season:

The following are arguably one of the best receiving corps in the NFL through the first 4 weeks:

The following are the rushing statistics of the Broncos through weeks 1 through 4:

Finally, some team offensive statistics for the first 4 weeks of the 2008 season:

I think that it is hard to establish any kind of trend after only 4 games; while this series is called ‘The Shift' it's hard to establish any kind of shift after 4 games. It is possible to notice a trend from week to week and if there is any one word that describes our offense, both on an individual and team effort, it is decline. Did opposing teams start to figure out how to slow down our juggernaut offense after watching us dismantle Oakland on national television? Or did the Broncos start to do what they seemed to do all year and beat themselves? The Quarterback is the field general and commands his troops on the field, as so eloquently described by the late, great, George Carlin.

While Jay Cutler's statistics declined, are his statistics the rewards of how his team performed around him or are the team's statistics the rewards of how Jay Cutler performed for them? Weeks 1 - 4 were the high of the high for our season with a sharp pain in the final week of the first quarter of the city. Kansas City was supposed to be one of our easiest games of the year but we shot ourselves in the foot; over and over and over. Sound indicative of any other time during the season?

Next week we will analyze how our defense played over the same span of the season and set the groundwork demonstrating ‘The Shift' that they displayed during the 2008 season.