You've heard this nugget of wisdom a hundred times.

In the NFL, it's literally true. For if you turn the ball over twice, your chances of winning go way down. Not quite as far as the Raiders' playoff chances in November, but very far nonetheless.

We know that turnovers are the single biggest reason for winning and losing in the NFL. It's estimated that the team that wins the turnover battle in an individual game ends up winning the game about 80% of the time.

Intuitively we can all agree that if Jay Cutler throws 1 interception this upcoming week, it's much better than if he throws 2 picks (notice I didn't say zero, because it always happens). Why? Well, simply, the Bears lose a scoring opportunity, while the Bengals gain one. It's so simple, they're even considering this question for the Oakland GED test.

But just how much more costly is that 2nd interception? We can get a pretty good idea by looking at all of last season's data and the first six weeks of this season. For starters consider:

Given this, it's simply a matter of going back through the data of each game, extrapolating the number of turnovers, and correlating these numbers to wins: 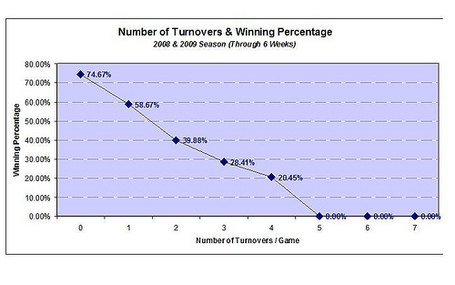 As you can see (given this sample size):

Remember, these percentages are independent of actually winning the turnover battle, they are just a straight up analysis of the number of turnovers in a game and whether or not a team wins. So this includes games that are 0-0 in turnovers in which one team wins and the other loses.


As you can see, that 2nd turnover is a real beast, because it takes you below .500. We can do a simple thought experiment to drive this point home. Imagine 3 different teams. Team Zero plays every game with 0 turnovers. Team One plays every game with 1 turnover. Lastly, Team Two plays each game with 2 turnovers. And let's assume these same percentages hold true. At the end of a hypothetically season:

Now it becomes clear why that 2nd turnover is going to get your coach fired after just a few seasons. He's never in the playoffs and your team is only making news once a year in the draft. Clearly, this is a hypothetical example, but it certainly rings true. Turnovers make a huge difference, and just having one more turnover in your box score is extremely costly. You can hope your defense goes out and gets more than you give up (in which case, your winning percentage is very high), but on those days in which it can't, you should just take care of the ball.


Now, if you are a Bronco fan, you should have a giant grin on your face right now, and not just because the Broncos are going into the bye week 6-0. It's because you should have suddenly realized (if you haven't already) why Pat Bowlen hired Josh McDaniels and, in addition, why Josh McDaniels traded for Kyle Orton. You see it, right? Are you sure?


No? Okay, it's fine. We'll quickly break it down. First, the entire football philosophy of Josh McDaniels is built around turnovers--getting them (see Nolan, Mike) and not giving them up. His offense is built around short, high percentage passes that sustain drives and, at least in theory, do not result in many turnovers. In short, he's trying like hell to coach a team that is like our Team Zero example.


You might be tempted to say, "Everyone is." Yes, this is true, all coaches say this. But are their offensive philosophies and personnel congruent with this goal? Not always. A perfect example (and my favorite team to mock) is the Oakland Raiders. When your whole offensive philosophy is built around stretching the field vertically in a league where safeties are as fast as corners, you are going to put up a lot of high risk passes. Unless you have the personnel to pull this off (few teams do), you are in for a lot of problems. High risk passes result in more turnovers, which, as we can see from our data, result in few wins. It's really that simple.


Which brings us to Kyle Orton. I think you are getting it now. While strong arm QBs are very interesting (and high maintenance), they are going to continue to want to use their talents to sling the ball around the field and stretch teams vertically. All high risk strategies. Kyle Orton isn't like this. Either he's looked at these percentages (like McDaniels) or he simply realizes that high risk strategies, while they are needed when you are down with two minutes on the clock, are a losing proposition when it comes to winning football games. In short, he's a low risk QB in an offense that asks--no, demands--its leader to make low risk decisions.


It really shouldn't be a surprise that Kyle Orton has a 66% percent winning percentage. What will be more of a surprise is that he's going to have an opportunity to push it up to 75% with McDaniels--year in and year out.