Share All sharing options for: MHR University - The 4-4 formation, and Wildhorse (Wildcat) References 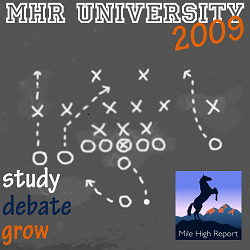 I get a lot of questions regarding three formations. The first is the 5-2 variant of the 3-4 (such as employed by the Denver Broncos). My last MHR-U was on this topic, and several members and staff have written on this issue. Since Denver uses it, you can expect MHR to be on top of it.

I also get a lot of e-mails about the wildhorses formation. I've told several members that I would write on this, but many members have stepped into the gap and written excellent posts about the formations and how they are used. For my part, I am going to put together a reference guide so that the inquiring scholar may look up all of the information he or she needs in one, easy to find place (below).

Yi Zhang's email is typical of the dozens of requests I get for word on the Wildhorse. The offense we saw on the field against the Patriots for several plays was not the wildcat, but has some points in common. He asks for a look at the wildcat, as he was impressed at how it was used to beat a good (NE) team. Let's take a deeper look.

From a comment by SlowWhiteGuy, one of our members who also has a coaching background -

...while a lot of announcers seem to want to compare the Wildcat with the Wild Horse they are actually two entirely different systems. The only similarity is the direct snap.

The Wildcat is a Spread Option attack from the shotgun. The tailback (Brown) lines up in the shotgun and a wingback (usually Williams) comes across on a jet-sweep action. The TB reads one of the defenders, usually the frontside or the backside DE, and options off the read. If the player bites on the jet-sweep, Brown keeps it; if the defender stays home he hands off on the jet-sweep. The defender is always wrong.

The Wild Horses is not an option based attack, but it does force 11 on 11 football. When Orton moves out from under center he forces the defense to account for six skill positions instead of the usual five. This forces the defense to show its hand a bit. That gives Orton a second pre-snap read and he can decide to continue with the direct snap or, he can motion back under center and get a third pre-snap read. It’s really about unmasking the defense.

Now we may see more wrinkles, like some jet-sweep action or some flee flicker action off this concept. But, while the Wildcat is primarily about creating option dilemmas for the defense the Wild Horses seems to be about unmasking the defense to exploit the holes.

SWG is entirely correct. I couldn't say it any better, and he stole my thunder for this article. I have nothing to add, except for an excellent breakdown on how to use the wildhorse. Funny thing is, I can't take credit for that either.

As used by Denver in the Patriots game, the Broncos used the wildhorse to probe the NE defense. Here is the excellent play-by-play background on how this was done, by member LebowskiBronco as part of his excellent series "The Dude Abides" -

As you can see, the wildhorse is less of a formation with an intent to move the ball (such as with the wildcat), and is designed to see what the opponent is doing. Both formations (wildcat and wildhorse) have the word "wild" in them, and both have the direct snap (to a RB), but beyond that, they are entirely different.

If anyone has any questions on the wildhorse, or even on the wildcat, this is a great time to ask in the comments section below.

One of the emails I got on this subject was from George Rowland, a young man who will be playing football at a university in the United Kingdom that runs a 4-4 defense. This makes sense, since the pool of players to pull from isn't going to be as diverse as in the USA. In a UK program, the plays are likely much more oriented towards running the ball. I hope you will all join me in wishing George the best at his studies in academia as well as American football. (As an aside, I wish George extra special good luck. I went to a university in the United States, and had to learn rugby! In that sense, I feel a special bond with George in learning a sport that is different from what one might have grown up with).

The 4-4 is a common defense at the middle school level (where there is much less passing) and at many smaller HS programs (where the pool of players presents fewer opportunities to find QBs and WRs for the offense).

There are two main variants. The first is called the "4-4 single", and the second is the standard 4-4, which is often mistaken for the 46 defense. While the 4-4 standard sounds like it would be more common (being called "standard"), it is the "single" that many programs run nationwide.

In the "single", we have four linemen (DE - DT - DT - DE) and four LBs (OLB - ILB - ILB - OLB), 1 cornerback, and two safeties. Many early age programs will oversimplify, and call the OLBs "DEs", but this isn't technically correct.

Here is how the middle school program that I was associated with ran our 4-4 (single variant). We put our biggest guys at DT. We put our fastest guy at CB. We put our toughest guys at the two ILB positions. We put our smartest kids at OLB. Our best all-around athletes took safety and DE, with the smarter kids going to safety. I am being very, very simplistic here for the sake of brevity.

In every play, without exception, the CB played man coverage. He never blitzed or zoned. He started in "on" coverage (halfway between "off" and "press"). The FS played deep zone, and his only job was to ensure that no offensive player was further down the field than he was. The SS played over coverage on the WR with an eye towards the TE. We didn't blitz our SAFs.

The DTs and DEs had only 3 plays to remember. Slant right, slant left, or straight up. Straight up was a rare call (once or twice per game). It was used to allow our guys to get a "hit" or "jack" on an opposing linemen. While not a completely sound call, it had the value of pumping up the line, and taking the OL off balance. The emphasis for the DL was to fire out of their stances quickly, and punch through (an underarm-punch motion) to get penetration between O-Linemen. This was entirely a one-gap proposition. Every gap was occupied, and the QB harried. Even on run plays (the vast majority), we often disrupted plays in the backfield. With advanced kids from year to year, we might introduce the "swim" (an overarm technique).

The OLBs had to be smart. Every play, they played run contain to the edges. The had to have the discipline to NOT make the tackle until a runner turned back to the inside of the field (where the remaining 11 defensive players are). Their number one focus was to ensure that a runner never, ever reaches the side of the field where he can then streak up field. With enough discipline, no sweeps or reverses would throw off our OLBs, forcing opposing teams to take the run up the gut.

The ILBs had only two assignments - zone the run, or blitz. So there were only 4 plays. Blitz right, blitz left, blitz both, or stay at home. Blitz both was rare, and stay home was most common. I'd guess we ran "stay" 70%, blitz R or L 25%, and blitz both 5%. On blitzes, the ILB chose his gap (he knows better than the coaches which kid on the offense he can handle). On a double blitz, the two agreed ahead of time on their gaps. (The only time I was predictable was when an opposing team was backed to their own goal line. Our penetration with 4 players was almost always enough to do the trick, but double blitzes scored a lot of safeties for us. I don't recall getting burned on any plays for 90 or more yards).

Now, as the defensive coordinator goes, we had a very simple hand-signal system (which changed each quarter). We could call plays with the parameters being limited to the DL slants, and the assignments of the ILBs. Here are some samples of our simple system:

Our focus was simplicity, character, toughness, endurance, and an elite mastery of the basics. We didn't go into "fancy" plays or gimmicks. This made our kids very marketable to the HS we fed into, because our kids had the basics down. At the middle school level, our program never had a losing year. It was not unusual for our defenses to hold teams to negative yardage, and without any blitzing. System-wise, we were a run contain (the OLBs), bend don't break system. We didn't give up big plays, and rarely blitzed. Despite this, our teams were dominant enough to stop most plays at or behind scrimmage.

The other variant is the 4-4 standard. It looks just like the 46, and some may call it that. The formation features 2 CBs, 4 linemen, 4 LBs, and 1 safety. I don't call this a 46, and here's why. The 46 is not just a formation, it is a full-blown system (run notably in previous years by the Eagles, and years ago by the Bears). One of the OLBs is almost always a strong safety by trade. In a true, standard 4-4, the 4 LBs are true LBs and play any system other than a 46 system. (Note - good coaches will differ on this interpretation which is based almost entirely on what region he is from).

Like the single 4-4, it is based on stopping the run. In this case, the 4-4 provides a little more pass protection, but the deep pass is a threat. As with the 46, the FS must be elite. (The Eagles had Brian Dawkins, which allowed them to run a 46 for many years).

You now have a good, basic grasp of one formation strategy for a middle school level (7th, 8th grade) program. Of course, tactics (teaching proper techniques) and management are still issues that take years to learn. You know now quite a bit about the 4-4, though there are many approaches to using a 4-4, and I've only explained one (and a very simple one at that). And, of course, HS level football is light years ahead of this. But I hope that this article has given you an idea of how the 4-4 can work, and you can use the knowledge as a building block towards understanding how these principles evolve as we move up the ladder towards HS, college, and eventually pro-level play.