The problem with this statement is, that in the NFL, when you make a mistake, you rarely win.

And the more mistakes you make, the more likely it is that you are going to receive a first-class, gold-plated, butt whoopin' of the sort that is reserved for pickpockets and teams quarterbacked by JaMarcus Russell.

In football, the biggest mistakes are not holding calls or missed assignments, although they loom large indeed. No, the biggest mistakes are turnovers.  Give the ball up, you lose.  Get your opponent to give the ball up, you win. In the age of QB ratings and BCS rankings, it's still amazing how turnovers are simply the most important single statistic that determines who stays and who goes.

Last week, I posted about how winning percentages correlate with the raw number of turnovers a team has in a game.  That post is here.   It essentially makes the case for 2 turnovers being the magic number for winning and losing.  Give the ball up twice, your winning percentage drops below 50%.   And in my weekly post on the Stats That Don't Lie, I regularly make the outrageous claim that if you win the turnover battle, you will win 80% of your games.

I think we can help answer these questions.  For background, I once again looked at every game from the 2008 and 2009 seasons (right up until last week).  This essentially represents a sample of 358 games.  Not a bad sample size.  When I have more time, I plan on getting 10 seasons worth of data.  But unless you are sitting in the unemployment line known as the Black Hole, you simply don't have the time during the season to grab this amount of data, so the 358 games will have to suffice.

In summary, these are the results: 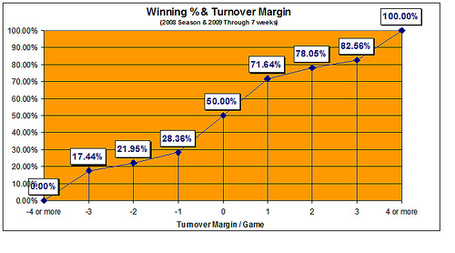 This chart illustrates the winning percentages of teams for each of the following turnover margins during this period:

The last point deserves more attention, to be sure.  Essentially, what matters more than the size of turnover margin is just making sure to win the battle in the first place.  As we can see from the data, a tie in turnover margin was the equivalent of flipping a coin.  But winning the battle improved winning percentage significantly.

Perhaps this explains why we've seen so many Super Bowl winners with attacking and ferocious defenses and offenses that focused on efficiency, field position, and taking care of the ball.  +1 works.  The formula works.

Which brings me to my main point:  Mike Nolan is a genius.

Why?  Why does Mike Nolan blitz as often as drunk virgin Raider fans?   He wants to win.  While I'm sure he's never looked at stats like the ones above, he doesn't need to.  His experience tells him that winning the turnover battle--even by one turnover--means the difference between winning and losing.

Of course you do.

Well those days are over, my friends.  The Broncos are not going to simply rely on luck to generate turnovers anymore.  Luck gets you nothing more than a coin flip's chance.  No, Mike Nolan isn't just trying to stop you on 3rd down.

He wants the ball.