Share All sharing options for: 'Getting Real', Broncos adorn cover of Sports Illustrated

Whether you believe in curses or not, people will surely have an opinion of the 4-0 Broncos, and Daniel Graham, gracing the cover of the October 12th Issue of Sports Illustrated.. The cover looks great, especially since the Broncos were sporting the Orange - 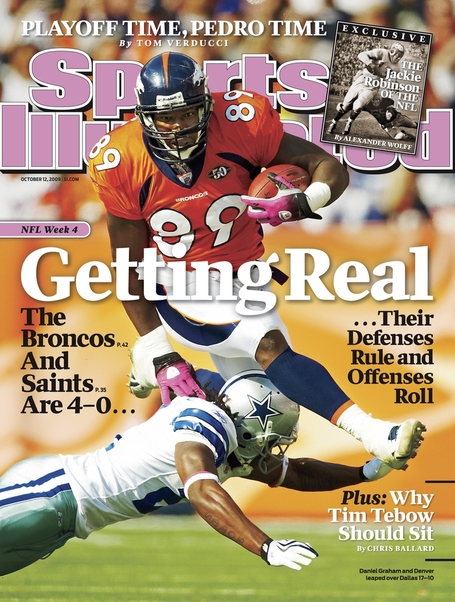 The article, written by Jim Trotter, was a great look at what the Broncos are building and how they have made it happen in such a short time. One particular part of the story was intriguing to me. It talks about Vonnie Holliday and what he was told after signing with the Broncos just prior to the start of the Regular Season -

"Vonnie Holliday is one of the more vociferous players in football, but even he was stunned into silence early last month by an impromptu scouting report on his new team, the Broncos. A 12-year veteran defensive end, Holliday signed with Denver the week before the Sept. 13 season opener and arrived in the Mile High City optimistic and excited. Then, while talking to a local reporter, he got the lowdown on his teammates: ‘Basically,' Holliday was told, ‘you're playing with a bunch of bums.' The newcomer was taken aback. ‘At first I didn't know what to say,' Holliday says. ‘Then I was like, ‘Whoa. I don't know what you've seen so far, but in the couple of [preseason] games I've watched, they've played hard and at a high level.' I mean, how do you say something like that?' A month later the answer is obvious: You don't."

So, Broncos Fans, do YOU believe in the SI Jinx?