Share All sharing options for: The Dude Abides...The Stats That Don't Lie, Week 9

"So including last night that's three Stats That Don't Lie incidents that didn't kill you.  Pain, or damage don't end the world, or despair, or beatings.  The world ends when you're dead.  Until then, you got more punishment in store.  Stand it like a man...and give some back."

The Denver Broncos?  They took another punch to the face this week, but with a 6-2 record, let's just say, I wouldn't want to find myself in a back alley with Brian Dawkins.

Welcome once again to The Stats That Don't Lie for Week 9.  These are the adamantium claws of stats. Your statistical Weapon X.  In short, these are the stats that are enough to piss off a Wolverine. They are: Turnovers, Field Position, Time of Possession, and 3rd-Down Efficiency.

As always, for those that need a primer, or want to look at the stats from previous weeks, just click on the following links (Raiders fans, if your mom says it's not past your bedtime, I guess you can click too):

I'm not going to lie to you, my friends.  In these four statistical categories, the Broncos continue to nose dive faster than Mitch Berger's roster spot.  Let's take a look from last week:

Last week I wrote that Denver continues to show a dangerous trend that could not be sustained.  From this week's rankings, this disturbing trend continues.  On average, the Broncos are starting drives on the 27.70-yard line (this is up slightly from last week because I went back and re-adjusted for the two Eddie Royal returns for scores).  This is lower than the league average of 29.59, and lower than both Tampa Bay (30.06) and the Broncos' next opponent Washington (28.44).

While the last two games are easy to "pin" on Mitch Berger (and fries), this trend started well before his signing. Even when Denver was winning, they were continuing to lose the battle of field position.  There is plenty of blame to go around, from the coverage and return units, to the returners and kickers themselves.  I usually try and restrict my views to stat-based, but I am making a plea for Alphonso Smith on both punt and kick returns.  Now that Ty Law is here for nickel situations, it makes sense for Smith to get on the field in this capacity.  Given that he was drafted in part to be a returner, I think he ought to be given consideration once again.

We need to also be honest regarding 3rd-down efficiency.  The Broncos are really starting to suck (not Raider bad, but pretty bad), converting only 37%, which is right at the league average.  Even the putrid Detroit Lions (37.55%) have a better 3rd-down efficiency than does Denver.   If the Broncos ever want to make a legitimate run at the playoffs, they need to be above 40%.  As an example, Minnesota (46.19%) and New England (44.70%) are well in front of them. Emmett Smith and I pointed out Orton's problems on 3rd and long in a previous article on Monday, and until Denver improves on 3rd down, the criticism of Orton will continue, and much of it will be warranted.

In Orton's defense, part of the problem has been Denver's running game.  MHR member Boydy pointed this out on several instances during the game thread.  On 2nd and long, the Broncos were running up the middle for very short, putting themselves in 3rd and long on several occasions.  And (all together now in a chant) Orton needs manageable situations.

Is it the play calling?  Ben Hamilton?  A Brett Kern/Jack Williams jinx?  Those are questions that many MHR members have already answered in far greater numbers and with more preciseness than I.  However, later in the week, I'll be looking at every single sack and incompletion from the Baltimore and Pittsburgh games (play-by-play) with some statistical analysis of the situation.

Through Week 9, here are the rankings of the 32 teams in the four categories: 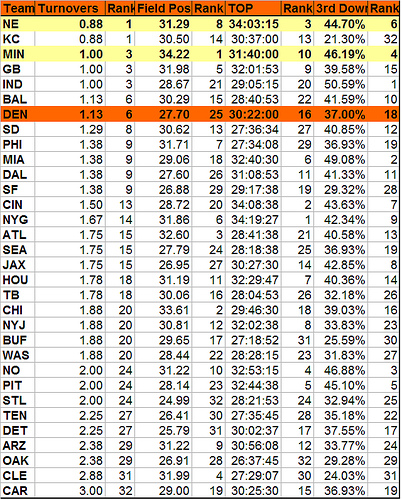 In addition to Denver, I've highlighted two other teams worth noting.  Both are in the top ten in these four statistical categories.  They are New England and Minnesota.  In particular, notice how well balanced New England is, ranking 1st in Turnovers, 8th in Field Position, 3rd in Time of Possession, and 6th in 3rd downs.  I think anyone who would pick against the Patriots right now is a complete fool.  I fully expect them to beat the Colts in Indianapolis in the coming week.  Peyton Manning could be the best QB that ever played, but the Patriots are a team, and last time I checked, Tom Brady isn't JaMarcus Russell.

Before getting into the Week 9 numbers, a few of the games are of note, and I'd like to spend at least a little time on them, because they really illustrate some interesting points.

First, there's not much to say about the Denver/Pittsburgh game other than Denver lost all four categories for the 2nd straight week in a row.  If you lose all four, you very rarely win in the NFL, because it means you simply haven't been on the field very much, you aren't generating opportunities to score, and when you are on the field, you can't sustain anything.  While it's Raider football, it doesn't get me fired up.

Denver's average starting field position for the game was the 21.64 yard line, as MHR member Chibronx pointed out in an earlier post today.  The Broncos could just as well told the referees before the game, "We'll just take a touchback if you don't mind...every drive."  They were also a nasty 35.71% on third downs, while Pittsburgh was 58.33%.

There were two games this week that almost made a liar out of the Stats That Don't Lie.  The San Diego/New York game was the first.  The second was the Miami/New England game.  In both cases, the winning team only won field position, and by a small margin.  How does one explain such anomalies?

In a nutshell, both field position and turnovers are relative to location, and situation.  This is intuitive, and has been brought up before. Bur more importantly, if you look at the stats from these two games, the turnover battle was within one.  And, as much as I like to make stats the definitive answer to all subjects football, even I will admit that sometimes, football is about making one or two plays that the stats just won't describe.

Such was San Diego's last drive.  The Chargers got the ball at the 20-yard line, took little time off the clock (1:46), didn't need any 3rd-down conversions (they were striking too quickly), and they didn't turn the ball over.  Sometimes a great play is better than a stat (John Elway made a career out of this, after all; Dan Marino, not so much).

Perhaps I am still curing my Cutler obsession, but I just can't resist looking at the Arizona/Chicago game statistically.  Up until last week, the Bears had been taking advantage of field position to the extent that they led the league in this category.  So what happens when they get a game in which their average starting field position is the  26-yard line?  Well, Cutler throws for over 300 yards, 3 TDs...and they lose.  What would you rather have?  Field position or yards?  Give me the field position everyday.

Lastly, a lot was made over how the Ravens dominated Denver last week, but look what happens to them just a week later when they don't start on average at the 40-yard line, and their 3rd-down percentage is 10%. Does this mean the Bengals are suddenly better than Denver?  No, it simply means that being in the same division breeds not only contempt, but familiarity.   It's the same reason Oakland can go and beat a team like Philadelphia, but the next week, against a division opponent, become the same cuddly Tom Cable-coached team.

Here are the individual game stats from Week 9 (including obligatory comments): 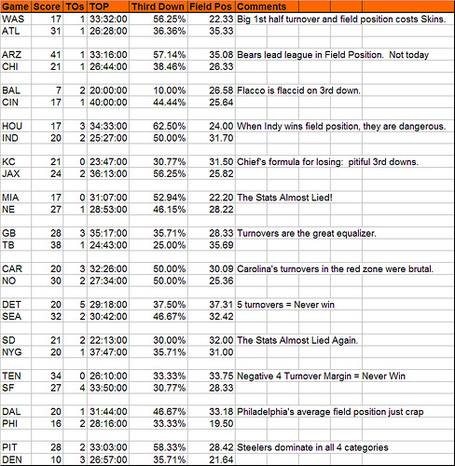 Looking ahead to Washington, here is how the two teams stack up in the four statistical categories (keeping in mind these are averages/game):

Washington clearly gives the ball up more often, and their 3rd-down efficiency is much worse than Denver's (which has been pretty bad as of late).  Sure, the Skins generally get better field position, but not by much, and not enough to offset the other stats.  Given Washington's average run defense, look for the Broncos to run the ball down Washington's throat and control the clock all day, setting up the play action to Marshall.

The Wolverine wants some more NFC East meat.  Clinton Portis probably doesn't play after suffering a concussion.  And, well Nobody makes The Stats That Don't Lie bleed its own blood 3 weeks in a row. Nobody!