Share All sharing options for: Why History Won't Have a Way of Repeating Itself with the 2009 Denver Broncos

Note:  This post is a joint collaboration between Douglas Lee and myself. You can't gather this much data in such a short amount of time by yourself.  So hats off to the guy that not only brings us "Horse Tracks" everyday, but gave me the very idea for this post.

Now that the Broncos, Captain McDaniels, and First Mate Orton are sailing through some rough seas (a 2-game losing streak), you knew it was bound to happen.

This shouldn't surprise you.  Perhaps you should be more surprised it took so long, given the unexpected sinking of the 2008 season, in which the Broncos drowned themselves after holding a 3-game lead through 14 weeks.

The whispers are now circulating through all of Broncoland that something like this is going to happen again.  The sirens of the 2008 Broncos season are still with us.  Perhaps the current 2009 season is also destined to end with a shipwreck into a rocky coastline.

Even the landlubbers in the mainstream media, who had fallen all over themselves to praise the Broncos after a 6-0 start, are bringing up the idea of another late-season meltdown. Here is what Jason Cole had to say on Tuesday:

The Broncos and coach Josh McDaniels have been a great story this season, but I just don’t trust what I’m seeing. In particular, the limitations of the Broncos offense have been badly exposed the past two weeks against the Baltimore Ravens and Pittsburgh Steelers (Denver scored a combined 10 offensive points in those two losses). Quarterback Kyle Orton has done a nice job most of this season, but he’s simply too limited to beat good defensive teams when the Broncos can’t run. Denver also has four pretty tough games on its schedule (San Diego Chargers, New York Giants at home; at Indianapolis Colts,Philadelphia Eagles). That 6-0 start could quite easily become a 10-6 finish, if not worse."

And the boys over at RealScouts just this morning had this bucket of cold water:

A precipitous fall awaits the Broncos, who were the surprise of the early season, because teams have figured out Denver's soft spots. On offense, the passing game features a ball-control philosophy, and opponents have stacked the box, daring Kyle Orton to throw downfield. That's not his strength. Unless Denver can stretch things out a bit, the offense will struggle. The defense has also sprung leaks against no-huddle schemes. The schedule is not kind, either. The Broncos have road games against the Colts and Eagles and home games against the Chargers and Giants.

While it's true that Denver will lose another game or two, and furthermore, that Denver's schedule isn't exactly Ohio State's, the idea that the Broncos are going to finish worse than 10-6 is completely silly.  There are several reasons for this.  First, despite some perceived limitations, Kyle Orton's career winning percentage (66%) would suggest (not predict) that Orton will win 5 of the remaining 8 games.  Second, this schedule still has Oakland and Kansas City (twice) on it.   Third, the Chargers, Giants, and Eagles have been as erratic as a JaMarcus Russell seam pass.  So who knows which version of those teams will show up.  10 wins appears achievable and 11 wins possible.

Yet there's an even deeper magic at work this year that should put your mind at ease.  You might not even be aware of its obvious and awesome power.

This mammoth force is not Jay Cutler's ego.  It is Points Differential.

As it turns out, the most important statistical measure of any team (aside from wins and losses, of course) is Points Differential.  This applies to all team sports.  Now, this isn't exactly a surprise.  I can see you saying, "Sure, the team that scores the most points wins.  Thanks for such deep insight. I think I'll go read another Orton vs. Cutler post." But before you do this, let me tell you that  we are not talking about each individual game.  We are talking about the size of the margin.  It's not a number we ever hear/read from NFL Network or ESPN or any other mainstream media outlet, which is exactly why you should focus on it.  Again, don't look at it as an individual game statistical, but as a running total.  It's this running total that will serve our purpose.

In a previous post on punting statistics and winning percentage, we explained the concept of the correlation coefficient.  It's a statistical method for understanding how one variable affects another in a linear fashion.  Throw this definition in the trash now (no need for more stats people in the world, they are like lawyers) and focus on the idea of correlation.   Just remember the scale runs from -1 to +1. As such, a negative number shows us a greater negative relationship between two variables.  A positive number shows us a greater positive relationship.  The greater the number as it approaches -1 or 1, the stronger the relationship between the two variables.

A quick example should suffice.  Let's say you wanted to know if there was a relationship between the number of punches thrown between coaches in a typical Raiders practice and the number of times Al Davis smiles during the day.  And after looking at the data you determined that the correlation between the two variables was .853.  This would indicate a strong relationship between Al's happiness and his coaches engaging in Raiders Fight Club. While we wouldn't say the fighting actually caused him to be happy (correlation is not causation), we would be pretty safe in assuming that the more more Tom Cable thrashes Randy Hanson, the happier Al gets.

So now that you understand correlation, let's go back to the correlation between Season Wins and and Points Differential.  For our data, we looked at all NFL seasons between  1999-2008, which is a very nice sample size. This is the result:

The correlation between Points Differential and Wins was 0.91

In 2008, we were conditioned as Broncos fans to focus on yards.  We heard countless times that the Broncos were the 2nd-ranked offense in football, that Denver was just an average defense away from being a Super Bowl contender. Several factors clouded our view of 2008.  First, the Broncos had the same won/lost record as the division champs (San Diego). Second, the season-deciding game happened to occur in the final week of the season. Third, Denver had a 3-game lead after 14 weeks. These factors all contributed to a very strong misconception among Broncos fans; we thought the 2008 Broncos were better than they actually were.

The 2008 Broncos scored only 370 points (16th-best out of 32 teams) despite having that "elite offense". They allowed a staggering 448 points, which placed them 30th in the league. This resulted in a points differential of minus-78; that is minus seventy-eight.

-78 is a significant number because when looking at the past 25 NFL seasons (1984-2008), a points differential of minus-78 means the 2008 Broncos were barely better than your average 5-win team. How's that, you ask? Since 1984, 62 different teams have managed to win exactly 5 games. The average points differential for those 62 teams was -84, which means the Broncos were a mere 6 points better than an average 5-win team from the past 25 years.   Have a look for yourself: 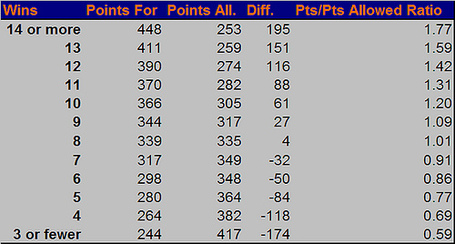 The point in giving you this information is twofold.  First, it's clear the 2008 Broncos were extremely lucky to be 8-8, with a gift win against the Chargers in Week 2 (Merci, Monsieur Hochuli). They were helped out by a missed field goal (our gratitude to Martin Gramatica) the next week versus New Orleans, and a dropped TD pass in Week 11 versus Atlanta (thank you, Roddy White). There were no games which went the other way in similar fashion; every Broncos loss was by at least a touchdown (four losses were by at least 20 points). So, take away those strokes of luck and the 2008 Broncos would have been a 5-11 team, or exactly what their points differential says they were.

The other reason for this chart is to show what the Points/Points Allowed Ratios are for each level of wins.  We can use this ratio to then look at our 2009 Broncos in order to assess if they are heading for the 2009 post season or for Davy Jones' Locker.

So let's now take a look at every team in the NFL through week 9 with at least a 5-3 record: 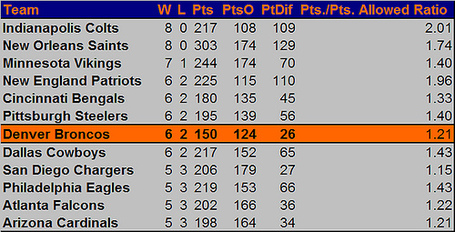 A few things immediately jump out from this table.  First, the Colts, Pats, and Saints really are the three best teams in football, with ratios suggesting they will each win 12 games. Second, Denver has a 4-1 record against the teams on this list.  This certainly would indicate legitimacy.  And third, Denver's own Points/Points Allowed Ratio (1.21) shows they belong with a least the second tier of elite teams in the NFL.

San Diego, in all fairness, isn't far behind Denver, with ratio of 1.15, so it's not as if the Broncos have a lot of room for error.   However, their ratio is lower, and likely signal a 9- or 10-win season.  Given that their schedule comprises games against Denver, Dallas, Philadelphia, and Cincinnati, one could easily see them ending up 9-7.

Of course, at the end of the day, it doesn't really matter what the Chargers do if Denver simply continues at its current Points/Points Allowed Ratio, because their current ratio corresponds to a 10- or 11-win season through all 16 games. Since they already have 6 wins (instead of the 5 wins their ratio would indicate they deserve through 8 games), an 11-win season is more likely.

Relax, Broncos Fans.  There's no need to bring out your cutlass and force Kyle Orton to walk the plank.  Everything is shipshape in the capable hands of seadogs McDaniels and Nolan.  Brian Dawkins is in the crow's nest, and if he sees anything on the horizon, he's going to hold a team meeting so all the scurvy dogs fall into line.

This isn't 2008.   This is 2009, and these Denver Broncos are for real.  The correlation between Points Differential and Winning is simply too powerful to suggest anything other than a Division Title.