Share All sharing options for: The Dude Abides...The Stats That Don't Lie, Week 10

I can no longer sit back and allow a stats infiltration, a stats indoctrination, a stats subversion, and the international stats conspiracy to sap and impurify all of our precious bodily fluids. --General Jack D. Ripper

Last week another disaster movie, 2012, opened across the USA. This coincided with Week 10 of the NFL season. We were reminded of three important things:

The Denver Broncos have thus far avoided complete catastrophe, sitting at 6-3. But another loss, and you should probably head to the basement with all of your canned goods, bottled water, and flashlight batteries.

Welcome to the Week 10 version of the Stats That Don't Lie. These are the stats that infect the entire population--at least until the 3rd act. They are the statistical little green men locked in your pantry. In short, these are stats to take to the bomb shelter (with the little lady, of course). As always they include Turnovers, Field Position, Time of Possession, and 3rd-down efficiency.

The Broncos continue their downward spiral from last week's ranking in the four categories. But rather than compare this week's rankings to last week's as we normally do, let's instead look at a picture that tells the real story of the 2009 Broncos' season. The following chart is the Broncos' turnover margin from each game of 2009. You may want to hide the women and children before you look at the last three (Note: I "normalized" the New England game and removed Orton's hail mary, so the turnover battle was effectively zero). 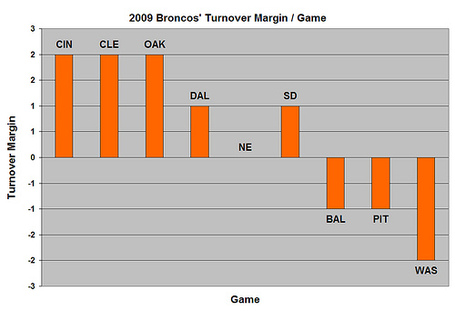 If you knew nothing about football or had been dropped here from outer space (your average Raiders fan) and you saw this graph, it wouldn't take you long to figure out which games the Broncos had won and which games they had lost.  In fact, if you had no knowledge of Jay Cutler or Kyle Orton or Mitch Berger or Brett Kern, you would probably look at this chart and say, "5-3, no doubt, with the New England game going either way."

This makes both intuitive sense and statistical sense. If you've read some of my previous work on turnover margin, you'll probably remember that during the last roughly 360 games, I found the following winning percentages associated with each specific turnover ratio:

Simply put, win the turnover battle and you will win on the scoreboard. And not just for the obvious reasons of short circuiting your drive, taking away potential points off the board, and giving your opponent the chance to score. If you've ever played any sport (although it's particularly pronounced in football), you have probably experienced what happens when you feel momentum and emotion shift from one team to another. It's contagious. It's powerful. The very outcome of a game is often determined by it. Well, a turnover is like a momentum shift on HGH. If you doubt this, simply replay the tape of Champ Baily intercepting Tom Brady in the 2005 Playoffs. That was the BALCO of turnovers.

On Sunday the Broncos didn't win the turnover margin against the Redskins, and they are 6-3 because of it. Fake field goals and injured ankles got the headlines. But turnover margin was the dirty little secret.

Here are how all 32 teams rank this week in each of the four categories. Remember, I calculate this on an average/per game basis. 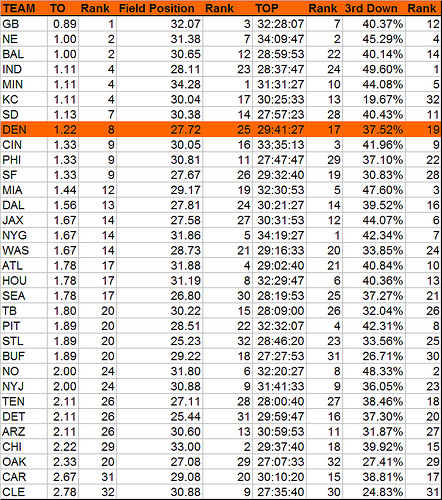 Denver is now 8th in giveaways, 25th in Field Position, 17th in Time of Possession, and 19th in 3rd-down efficiency. If one wants to begin a descent into mediocrity, these kinds of rankings will certainly suffice.

The third downs and time of possession will come along, I believe, but field position remains a primary concern. Mitch Berger continues to be the focus of a lot of friendly fire; but again, I ask, how can Denver kick start its Kick Return and Punt Return game?  The Broncos aren't going to get 2 return TDs again against San Diego, nor is San Diego going to kick the ball out of bounds twice.

I make my weekly plea for Alphonso Smith getting some action as a return man.  I like the move for several reasons.   First, Ty Law is now getting most of Denver's Nickel action.  Second, Smith is a playmaker.  He needs to be on the field.  Don't believe his 40 time.  He has a burst.  Third, it can't get much worse.

A few other teams stand out from these rankings.  First, notice New England.  Sure, they lost a crazy game to Indianapolis, but despite their 6-3 record, they are battle tested, playoff ready, and they rank in the top 7 in all four categories.  Another team is New Orleans.  For an undefeated team, they sure do turn the ball over a lot, despite their turnover margin being +6.   Even though they are in the top ten in Field Position, Time of Possession, and 3rd-down efficiency, they might run into a game in the playoffs, in which they are not going to be explosive enough to overcome their mistakes, and the other team is going to hold onto the ball.

There are two other teams of curiosity. The first is Green Bay, who ranks 1st in giveaways/game, and is in the top 12 in each of the other categories.  As a stats guy, I have to believe what I am seeing with these numbers.  I think they surprise people in the 2nd half, have a chance to beat both Baltimore and Pittsburgh, and get to the playoffs.  The second team is the Cleveland Browns, who are last in giveaways, 30th in Time of Possession, and 31st in 3rd-down efficiency.   Their only bright spot? They are ninth in Field Position. How is this?  Joshua Cribbs (they call me Mr. Cribbs).

Why would I focus on the Cleveland Browns?  For one, I enjoy making fun of the Cleveland Browns.  Another reason is for perspective.  Denver would have to sink pretty low to get into Browns territory.  Third, if I can reference Sidney Poitier, you think I'm not going to do it?

The first, of course, is the Denver/Washington game.  I've already pointed out Denver's horrid performance with respect to turnovers, but Washington also beat them in average starting field position.  This happened even in the face of the two kickoffs out of bounds by Washington.  Denver's average starting field position was the 27.91-yard line.  Washington's was the 31.10. Denver also lost the time of possession- and 3rd-down efficiency battles.  Denver's quick-strike offense in the first half helped contribute to this, along with the injury to Orton, forcing Chris Simms into action, and into inaction on 3rd down.

Another game of interest was the Kansas City/Oakland game, for the chief reason that this is the first game of the entire season in which one team lost all four categories (non-ties), yet still won the game.  Congrats, Oakland.  Even when you win, you lose.  Just how was this possible?

Rather than say karma, I went back and watched the game again in search of some magic bullet that would tell me how this happened.  But it was just putrid Oakland football that caused their demise. A slew of penalties, dropped passes, and a red-zone interception told the tale.  And if you look at the stat line, it's not as if Oakland dominated all four categories.  So I'm filing this one away as an renegade game.  Al Davis would be so proud.

Of course, I can't stop myself from looking at the Chicago/San Francisco game.  Jay Cutler, you are the Frankenstein of QBs.  You have a grotesquely strong arm, but you're going to kill your team with its use.  5 interceptions and a turnover margin of -4.  That's not quarterbacking.  That's a recipe for a Mayan disaster movie.

And finally, we would not be complete if we didn't look at Brady vs. Manning.  While Bill Belichick's 4th-quarter decision will be the focus of the analysis for most of the week, the stats tell the story.  Despite the win by Indianapolis, New England was the better team, and shouldn't be worried about the rematch, which is certain to happen.

Here are the individual game stats from Week 10 (including obligatory comments): 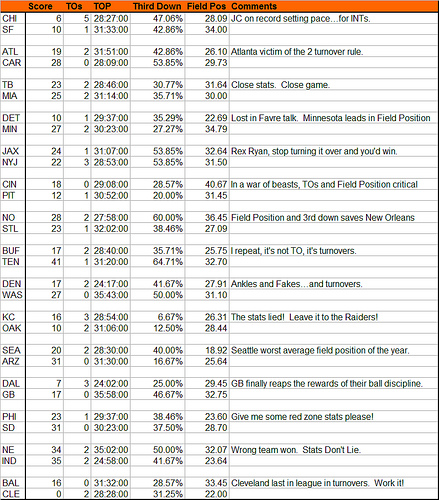 Looking ahead to San Diego, here is how the two teams stack up in the four statistical categories (keeping in mind these are averages/game):

The turnover battle is a wash.  Denver has been chewing up more clock, but that's not saying much.  And San Diego has the edge in both field position and 3rd-down efficiency.

While these stats point to doom and gloom for the Broncos, one has to also consider home-field advantage. In the NFL, the home team wins about 55%-60% of the time.   Is this enough to overcome Orton's injury, the return game of Darren Sproles, the whining of Phil Rivers, and the momentum that is clearly in the favor of the Chargers?

If so, the apocalypse will be with the Chargers.  Denver will have beaten them twice, and tie-breakers won't save them this year.