Share All sharing options for: The Heyward-Bey Assault Index

One statement you hear frequently from fans and from the media is that certain quarterbacks are victims of bad receivers who drop a lot of passes.   The statement was made about Kyle Orton during the first three games of 2009.  It's also a constant mantra of Chicago fans this year with Jay Cutler.   The conventional thinking is that if only Jay's receivers could hold onto the ball, the Bears would be a playoff team.

But which quarterbacks in the NFL really are the victim?  And which QBs are just playing one on TV?

For the answer to this question, I'd like to introduce you to a fun little stat called the Heyward-Bey Assault Index.

You can probably already guess where I'm going with this.  Darrius Heyward-Bey, multi-millionaire and 1st-round draft pick for the Oakland Raiders, has hands of complete stone.  He'd have a hard time catching a nylon football with Velcro gloves. I've added the word "assault" because when he's catching your ball, it feels like he just sucker punched your completion percentage.   So this index is named for Al Davis's latest investment.

The Index is amazingly simple and can be understood even by the most casual of fans.  Essentially, it's the number of dropped passes as a percentage of total passes.  The data is courtesy of Stats, LLC (http://hosted.stats.com/fb/index.asp).  I have only included quarterbacks with a minimum of 180 attempts. 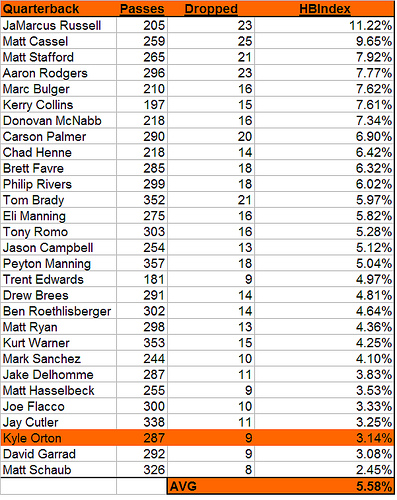 Orton is a good example for understanding this Index.  Only 9 of his 287 passes this year have been receiver drops. This translates to 3.14%, which is remarkably low.  We can reasonably conclude that Orton's receivers, when they are open, have been holding on to the ball very well.

Notice who leads the index.  It's our friend JaMarcus Russell.  Given how many passes the Oakland Raiders' wide receiving corp drops, you can understand why this index is named for the overpaid Heyward-Bey.  The Hutt was benched for a whole variety of legitimate reasons, but its too bad Oakland can't bench its entire group of wide receivers as well.

I find this table interesting also because of Jay Cutler.  Cutler apologists are always pointing out that his receivers drop too many passes, and that's the reason he's not been more successful.  From this table, we can see that it's simply not true.  His index (3.25%) is well below most quarterbacks on this list, and barely larger than Orton's.

The chart also gives a little insight into Matt Cassel's situation in Kansas City as well.  The Chiefs have been horrible on 3rd downs this year.  It's clear from this chart (and from watching several of their games) that the wide receivers have had some problems holding on to the ball.

Since the Broncos are playing San Diego tomorrow, it's also worth noting the index of Phil Rivers, which is 6.02%. This is almost double Orton's index.  Perhaps San Diego noticed this too, and that's one reason why Chris Chambers is no longer with them.  However, if you'd still rather have Vincent Jackson, Antonio Gates, and Malcom Floyd over Brandon Marshall, Eddie Royal, and Tony Scheffler, you can be my guest.

For me, two other surprises on this list are Tom Brady and Brett Favre.  Their receivers have been dropping many more passes that I had thought.  This makes what they are doing this year even more impressive.